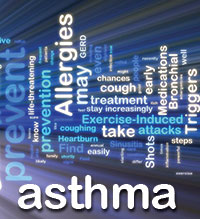 Asthma is one of the most common medical conditions in North America. The prevalence of asthma has increased significantly over the past few decades. There are a number of possible reasons for the increase in asthma rates including increased pollution in the atmosphere. However, there is another cause that is often overlooked; food allergies. In this article we will discuss how food allergies can cause or exacerbate asthma.

About 3½ years ago Vincent came into the office with a chronic hacking cough that had been present for over 10 years. It was the kind of cough you could hear outside the building. He had been through a battery of tests and his doctors had concluded that it was due to his asthma. He had been taking inhalers for over 10 years but no matter how much or how often he used them the cough just wouldn’t go away. Asthma typically involves inflammation in the lungs and constricted airways in the bronchioles. The cause is often unknown and unfortunately most conventional treatments involve merely trying to decrease inflammation and dilate the bronchioles with inhalers. Unfortunately, the inhalers which typically contain corticosteroids do not treat the actual cause of the inflammation.

When I first met Vincent we went through an assessment as part of the initial consultation. We found that he had chronic constipation, heartburn, hives, and eczema. This immediately made me suspicious of food allergies.

The naturopathic approach to treating asthma involves identifying the possible causes of inflammation in the body. One of the most common causes of inflammation is food allergies. The type of food allergy that is most likely to be overlooked is called a Type II Delayed Sensitivity Reaction. This type of allergy involves the production of an immunoglobulin called IgG, which attacks the offending food. The symptoms of Type II allergies are usually chronic and present slowly over time, which makes it very hard to determine their presence. The symptoms can be highly variable but typically involve inflammation somewhere in the body.

When I explained the potential connection between food allergies and asthma to Vincent he decided to have the IgG test. When the results came back from the lab we learned that Vincent had a number of allergies to various foods. Vincent immediately decided to avoid these foods to see what would happen. I am happy to report 3½ years later Vincent’s cough has not returned.

If you have been diagnosed with asthma but are not happy with your treatment you may want to consult a physician who is trained to identify Type II food allergies. Like Vincent, your asthma may have a hidden cause you have not looked for in the past.