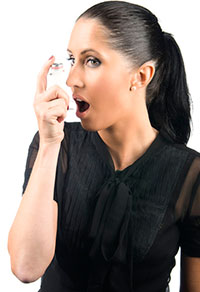 In 2012 I was a mess. Same with the year before. And the year before that. Truth be told, my body has been a mess in multiple ways for most of my life.

I am asthmatic, and have suffered a lifetime of severe allergies and sensitivities. During an annual physical, I watched my doctor's alarm when I told him I was using my asthma inhaler five to six times daily without getting relief. I soon found myself on a somewhat helpful but horribly dehydrating daily cocktail of two Benadryl, one 24-hour Claritin D, 10 mg of Singulair, and my asthma inhaler as needed. On one of my trips to the E.R. with an especially severe asthma attack, I was stunned to learn that I had developed a life-threatening allergy to steroids. What followed that E.R. trip was three and a half weeks missed from work, as my asthma attack blossomed into severe bronchitis, and I could no longer take steroids to reduce bronchial inflammation.

I eventually got better. But despite my medications, I was still drippy, wheezy, and generally miserable every day. And that was just one of my serious health conditions.

Eventually, I had an epiphany.

In May 2013, I met with a colleague who happens to be vegan. Clutching my box of tissues and blowing my nose, I observed her radiant skin and boundless energy in stark contrast to the perma-mess that I had become, and had to ask myself what I was waiting for.

I knew I needed to get off dairy for good and I had also read Dr. Richard Firschein, DO's theory in his book Reversing Asthma (Warner Books, 1996) that asthmatics have no business eating eggs, as the albumin is phlegm-producing. But egg and dairy are in so many dishes, and I anticipated that being vegan would be difficult and unpleasantly restrictive for me. So I stubbornly continued to resist change—eating my eggs and dairy, and feeling generally awful. Observing my colleague in that meeting, I decided I had had enough self-inflicted suffering. On that day I vowed to say goodbye to dairy and eggs. As I was already a vegetarian of 25 years, this meant I was essentially going 99 percent vegan (I still eat local raw honey to manage seasonal allergy symptoms). I also pumped up my leafy greens intake, and eliminated most processed foods.

It was almost immediately apparent how beneficial this decision was for me. Within a mere three days I was mostly free of symptoms that necessitated taking those daily asthma and allergy meds. So on that fourth day, I stopped taking them. With each passing month, I have felt increasingly stronger as my body continues to detox. When pollen counts are high, I just eat raw, local honey and that manages my sniffles.

But that huge benefit was only the beginning. In 1999, I had been diagnosed with polycystic ovarian syndrome (P.C.O.S.), a hormonal imbalance that includes ovarian cysts and unpleasant, painful symptoms for which I was prescribed birth control pills (despite having my tubes tied in 1995 - how ironic). I had tried going off the Pill several years after my diagnosis, only to have my symptoms re-awaken with a fury. Since eating cleaner, I was curious to try again and see what would happen.

According to the Harvard Gazette's interview of Dr. Ganmaa Davaasambuu, a scientist at the Harvard School of Public Health, cows are milked approximately 300 days a year, and are pregnant for most of that time. When a cow is pregnant, her hormone levels are significantly higher, and those hormones are in her milk. When we eat dairy, we ingest a lot of extra hormones, presenting a variety of potential health consequences. As the Gazette article reports, "Dairy…accounts for 60 to 80 percent of estrogens consumed."

Realizing that I had rid myself of unwanted excess hormones once I stopped eating cheese, I decided to really walk on the wild side and go off the Pill. And would you believe that not only was I P.C.O.S. symptom-free, but I also had regular periods for the first time ever? One month later, when my body was behaving like one in hormonal balance, I realized that my mood was much improved. Consequently, I was ready to try the final step of my experiment: going off my antidepressant. I suffered from depression since age five, and had been medicated for the past twenty years. But, I had also eaten lots of eggs and dairy for most of my life. I had tried going off my medication once before - it was a disaster, and I went right back on it. But not this time. Now, as I decreased my dose to zero, I noticed that I felt…FINE, for the first time in my memory. Talk about liberating. I was shaken to my foundation, in a good way.

After reporting this story to my amazed and supportive doctor last July at my annual physical, I couldn't help sharing with him how moved I was by the experience I never dreamed would be mine: walking out of his office empty-handed, with no prescriptions.

Ironically, the healing power of food is hardly news. In the late 5th Century, B.C.E., Hippocrates, widely regarded as the father of Western medicine, said, "Let food be thy medicine, and medicine thy food." Even Hippocrates and his contemporaries understood that the effects of food can range from toxic to healing.

Now, bio-individuality is surely real, and everyone is different. But what my body clearly needed was to get off the eggs and dairy. All it cost me to free myself from five daily medications that I evidently did not necessarily require was my willingness to forego eating the foods that made me sick and to add in a whole variety of new delicious foods that supported my health. Did I miss my cheese? For the first week, I absolutely did. But after that, I must confess that I no longer wanted to eat the way I used to, as nothing tasted better than feeling my new clarity and vibrancy!

I had such a life-changing improvement in my health, made possible not by some modern miracle drug, but by thoughtful food choices. I hope that others who are suffering like I was can consult with their health professionals and embark on a similar healing journey.

In future, I will be writing about the health benefits of whole foods, and I will share easy-to-prepare, delicious recipes to make your path to feeling great simple and enjoyable. Eating well doesn't have to be difficult, and it's my pleasure to share in your journey to optimal health.

Marney White is a Holistic Health Coach living on Long Island, NY. She helps empower her clients to reach their wellness goals through an education in whole foods, including guided tours of the health food store and in-home cooking classes. You can read more about her and her programs at www.BeNourishedNow.com, and follow her on Facebook at Be Nourished Now, Inc., and on Twitter @Marneycakes.

Marney White, Holistic Health Coach and author of "Healthy Body, Happy Life" has experienced the power of Hippocrates' quote, "Let food be thy medicine and medicine thy food." By implementing simple dietary changes, she has finally freed herself from life-long daily medications for asthma, allergies, PCOS and depression, and maintains her goal weight. Her mission is to share practical, simple, and lasting bio-individual solutions to weight loss and wellness issues with her clients.