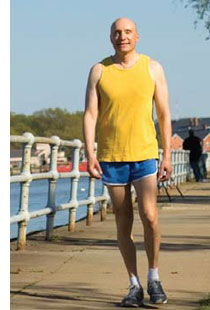 A 2007 survey involving 2,282 adults across the United States, including 1,111 men, found that more than half of the men had not seen their primary-care physician for a physical exam in the last year, and more than a quarter reported waiting “as long as possible” before seeking medical help for sickness, pain or health concerns. Of those men surveyed, 42 percent were diagnosed with at least one of the following chronic conditions: high blood pressure (28%), heart disease (8%), arthritis (13%), cancer (8%) or diabetes (10%).

The survey also found that 78 percent of the men with a spouse or significant other said that person has some influence over their decision to go to the doctor. In that vein, the American Academy of Anti-Aging Medicine (A4M; www.worldhealth. net) encourages men to take charge of their health destinies today. In this article, we present the latest research demonstrating that men can live longer, more productive, and more vital lives by making simple choices that reduce their risk factors for disease and increase their health and well-being.

For Men, Healthy Habits Lead to Longer Lives
Laurel Yates, from Brigham and Women’s Hospital (Massachusetts, USA), and colleagues analyzed 25 years of data from a group of 2,357 men (average age 72), who participated in the Physicians’ Health Study. Forty-one percent (41%) of the men lived to be 90 or older. At age 70, men who did not smoke, were not obese, had normal blood pressure, did not have diabetes, and exercised regularly had a 54 percent chance of living for at least 20 years. But among 70-year-olds who smoked, were obese, had hypertension and diabetes, and were sedentary, a mere four percent reached age 90. The longer-lived men also maintained better physical function and mental well-being as they aged, and developed heart disease or cancer years later than their shorter-lived peers.

Exercise Sharply Reduces Death Rate Among Older Men
Peter Kokkinos, from the Veterans Affairs Medical Center (USA), and colleagues, have completed a study involving 15,000 military veterans that is one of the largest yet to demonstrate the broad population-wide benefits of exercise. In this study of men ages 50 to 70, older men who were classified as “highly fit” died at half the rate of those who were not fit. Additionally, men who were “very highly fit” had a 70 percent lower risk of death as those in the “low fit” category. The researchers observe just 30 minutes of brisk walking five to six days a week would be enough to raise a middle-aged or older man from the “low fit” to “very highly fit” category in a matter of months.

Bulky Biceps, Trim Waist Correlate to Longevity in Men
The size of a man’s waistline and the muscle mass of his biceps provides snapshot of mortality risk in aging men. S. Goya Wannamethee and colleagues from Royal Free and University College Medical School (London, United Kingdom) studied more than 4,100 men ages 60 to 79, and found that those with a waist circumference less than 40 inches (102 centimeters) and above-average muscle mass in their upper arms were up to 36 percent less likely to die over a six-year period (as compared to those with bigger waists and smaller arm muscles). The researchers also found the combination of waist size and arm muscle mass to provide a far more accurate gauge of death risk as compared to body mass index (BMI) measurements, which the team found was linked to mortality only among very thin men.

Broccoli, Cauliflower, and Cabbage Fight Prostate Cancer
The cruciferous family of vegetables, which includes broccoli, cauliflower, and cabbage, have by many studies been shown to cut the risk of prostate cancer by up to 25 percent. Maria Traka, from the Institute of Food Research (Norwich, UK), and colleagues have determined consumption of these vegetables actually exerts cellular changes that result in the risk reduction effect. In the researchers’ study, 22 men with pre-malignant prostate lesions were given either 400 grams of broccoli to eat a week, or 400 grams of peas for the week, to eat in addition to their normal diets. At six and 12 months, PSA (prostate specific antigen) level was measured and a needle biopsy of the prostate gland was conducted. The men who ate broccoli, and also had a gene variant known as GSTM, present in about 50 percent of the population and which elevates the risk of prostate cancer, were found to have changes in the chemical pathways linked to cancer formation and inflammation. Conclude the researchers: “These findings suggest that consuming broccoli… result[s] in complex changes…associated with inflammation and carcinogenesis in the prostate.”

Beta Carotene Supplementation Benefits Aging Mens’ Brains
In that oxidative stress contributes to agerelated cognitive decline, antioxidant supplementation has been found to protect the brain. Francine Grodstein, of Harvard Medical School, and colleagues found long-term benefits for men taking beta carotene supplements (50 mg every other day) for 15 or more years. Long-term beta carotene supplementation was associated with a significantly higher score on tests of general cognition and verbal memory. Because beta carotene is converted into vitamin A in the body, the team suggests that beta carotenes exert their protective benefits on cognition by preventing the build-up of plaques associated with beta-amyloid deposits, which are associated with loss of cognitive function and an increased risk of Alzheimer’s disease.

Taken together, these two health risk factors are a major cause for concern: 321,973 men died from heart disease, and 286,830 from cancer, in 2004 alone. Men’s health is no mystery: Make healthy anti-aging lifestyle choices to enhance your odds of living a longer, more productive, and more vital life.