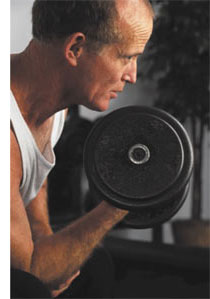 Muscle mass decreases 40 to 50 percent between the ages of 30 and 80. This reduces strength, slows metabolism, degrades key body functions (such as cardiovascular performance and bone health), and can compromise longevity.

Physical activity can make the difference between becoming decrepit or staying fit and vital. Fewer than one-third of Americans ages 50 and over get any regular exercise. A carefully crafted exercise regimen, tailored for your individual medical needs and lifestyle goals by a qualified medical professional, can help you live a long and healthy life.

Regular physical activity substantially delays the onset of functional limitations that result in loss of independence. Scientists have shown that highly active, nonsmoking women at the age of 65 have 18.4 years of active life expectancy remaining, whereas same-aged inactive, nonsmoking women have only 12.7 years of active life expectancy left. Exercise and healthy living can prolong the healthy human lifespan by an extra 30 percent!

Substantial health benefits occur with regular physical activity that is aerobic in nature (such as 30–60 minutes of brisk walking, 5 or more days of the week). Additional health benefits can be gained through greater amounts of physical activity, but even small amounts of activity are healthier than a sedentary lifestyle. Regular exercise in middle age can help men and women prolong their physical prowess as they grow older. A study by University College London (United Kingdom), published in April 2005, found that among 6,400 adults between the ages of 39 and 63, those who could be categorized as “sufficiently active” at the start of the study were more likely to be free of physical limitations nine years later. “Sufficiently active” study subjects were those men and women who engaged in 2.5 hours of moderate exercise (such as biking and leisurely swimming) or 1 hour of vigorous activity (swimming laps and running, for example) each week. After nine years of regular aerobic physical activity, sufficiently active adults were less likely to have physical problems that kept them from playing sports, lifting heavy objects, or being able to perform routine activities such as climbing stairs or bathing. Dr. Hillsdon and colleagues report that their “study shows that regular physical activity appears to be critical to preserving high physical function in relatively fit, healthy, middle-aged men and women.”

While aerobic exercise is important to keep weight within a healthy range and to improve the cardiovascular system, strength training is just as important. Strength training, also referred to as resistance training, enables men and women at any age to improve their overall health and fitness by increasing muscular strength, endurance, and bone density. This particular type of physical activity also improves insulin sensitivity and glucose metabolism.


Studies show that even men and women in their 90s who took up weight training increased muscle mass and strengthened bones, both key improvements in preventing falls and injuries and encouraging continued independent living. Yet, only 11 percent of older adults meet strength training recommendations. The vast majority of older adults are missing opportunities to improve their health through strength training. Fortunately, the fix is simple to execute. 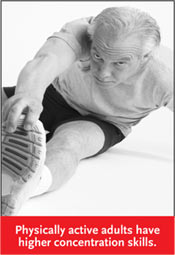 A study conducted by researchers at the University of Michigan should inspire our readers in their 50s and 60s to become physically active, especially if they have conditions or habits that endanger their hearts, like diabetes, high blood pressure, or smoking. In this study, which involved 9,611 older adults, those who were regularly active in their 50s and 60s were 35 percent less likely to die in the next 8 years than those who were sedentary. The reduction in the risk of early death was achieved in study participants who engaged in very moderate physical activity: the reduction was seen among those who walked leisurely, gardened, or went dancing a few times a week. Even those who were obese had a lower risk of dying if they were regularly active. Lead researcher Dr. Richardson observed: “We found across all ranges of cardiovascular risk, everybody got a benefit from regular activity, but the biggest absolute benefit, the biggest reduction in deaths, was among high risk people.” Continuing, Dr. Richardson remarked that, in people who have cardiovascular issues, the risk of remaining sedentary is far greater than “the risk of having an acute problem brought on by exercise.”

Physical exercise has also now been shown to help maintain our mental health. Physically active adults have higher concentration skills, which may help maintain memory and combat dementia. In a study by researchers at Northwestern University's Feinberg School of Medicine, Dr. Benloucif, Dr. Zee and colleagues found that sedentary lifestyles directly contribute to the decline in cognitive abilities and quality of sleep as we age. Twelve men and women, ages 67 to 86, who were functionally independent, participated in a two-week study involving a regimen of 30 minutes of mild physical activity, 30 minutes of social interaction, and a final 30 minutes of mild to moderate physical activity. Sessions began with warm-up stretching and mild to moderate physical activity (walking and stationary upper and lower body exercises). The final period of mild to moderate physical activity included rapid walking, calisthenics or dancing. A 10-minute cool-down concluded the 90-minute regimen. At the end of the two-week period, all participants demonstrated a 4 to 6 percent improvement in cognitive performance and improved sleep quality (including deeper sleep and fewer awakenings).

Exercise is a universally accessible anti-aging modality. The basics of physical exercise are just as much a key part of an anti-aging program as hormone replacement, diet, and nutritional supplementation. It's never too early or too late to start a regimen of physical activity, and the benefits of doing so are wide ranging for you and your loved ones.

For references, send a SASE to totalhealth magazine.

Dr. Robert Goldman and Dr. Ronald Klatz are the physician co-founders of the anti-aging medical movement and of the American Academy of Anti-Aging Medicine (A4M; Chicago, IL USA; www.worldhealth.net), a non-profit medical organization dedicated to the advancement of technology to detect, prevent, and treat aging related disease and to promote research into methods to retard and optimize the human aging process. Contact A4M at 773-528-1000, or by e-mail at This email address is being protected from spambots. You need JavaScript enabled to view it. to inquire about Sports Medicine Certification via the American College of Anti-Aging Sports Medicine Professionals (ACASP). 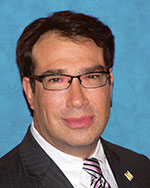 Ronald Klatz, MD, DO, is a physician, medical scientist, futurist, and innovator. He coined the term "anti-aging medicine" and is recognized as a leading authority in the new clinical science of anti-aging medicine. Dr. Klatz is the physician founder and President of the American Academy of Anti-Aging Medicine. In 1984, Dr. Klatz was a pioneer in the clinical specialty of preventative medicine: as a principal founder of the National Academy of Sports Medicine and researcher into elite human performance and physiology. Dr. Klatz is a best-selling author, and is columnist or Senior Medical Editor to several international medical journals.

Since 1981, Dr. Klatz has been integral in the pioneering exploration of new therapies for the treatment and prevention of age-related degenerative diseases. He is the inventor, developer, or administrator of 100-plus scientific patents, including those for technologies for brain resuscitation, trauma and emergency medicine, organ transplant and blood preservation. Today, Dr. Klatz helps to support aging-related biotech research and supervises postgraduate medical training programs for physicians from 120 countries.