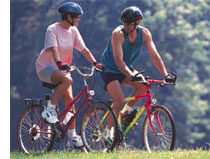 What does it take to actually thrive, not merely survive, in our hectic 21st century world?
The combination of relentless stress, a toxic environment within our bodies and in the outside world, and nutrient-depleted foods have conspired to create a perfect storm that directly impacts on the body’s ability to repair, detoxify and rejuvenate.


Unlike the health challenges of the past, which were predominantly due to infectious diseases, our modern health epidemics such as cardiovascular disease, diabetes, dementia, cancer, and obesity are fueled by a one-two punch of chronic inflammation and extensive free radical damage to our cells.

The Challenge of Inflammation and Free Radical Damage
In the world of medicine, it is now accepted that inflammation and free radical damage are two of the greatest threats to our health.

Inflammation is part of the body’s natural defense against irritation, toxic foods and chemicals, infections and other foreign invaders. However, there are times when the appropriate immune response to subdue infections, allergies and toxins is disrupted. The immune system can then shift into a chronic state of inflammation, which is now recognized as a major factor in most chronic health problems.

Free radicals are the other great threat, causing a condition known as oxidation, or oxidative stress. In the material world oxidation is observed as rust; and a similar process occurs within our bodies. Dr. Ames, from the University of California, Berkeley believes, “Free Radical Oxidant by-products of normal metabolism cause extensive damage to DNA, proteins, and lipids.” He argued that this damage is a major contributor to aging and to degenerative diseases such as cancer, cardiovascular disease, immune system decline, brain dysfunction, and cataracts.

Nutrition from the East Meets Innovation from the West The best solutions to the problems caused by our modern industrialized world come from Mother Nature; but it took a healthy dose of modern innovation and sound science to unlock her true potential.

Eastern medicine has long known that the seeds of nutritionally rich plants like black cumin, black and red raspberries, Chardonnay grapes, pomegranates, blueberries and cranberries contain exceptional amounts of vital health-promoting nutrients. For instance, black cumin has been used for more than 3000 years for its immune system strengthening properties, but it has only been scientifically investigated for the past 40 years. Since then, more than 200 studies have revealed the secrets of its extraordinary healing properties.

The oils from black cumin seeds are exceptionally nourishing, as they are loaded with antioxidants and essential fatty acids (EFAs). In addition, they contain nigellone, which works as an antihistamine to provide allergy relief, and thymoquinone, which has strong anti-inflammatory properties. Another natural powerhouse of nutrition is found in black raspberry seed oil. It is also nutritionally rich, and has powerful anti-inflammatory properties. It contains dozens of powerful antioxidants, as well as high amounts of omega-3 and omega-6 essential fatty acids. Modern science shows us that when combined, black cumin and black raspberry seed oils actually enhance each other, and the result is a terrific synergy that powerfully counteracts both inflammation and free radicals.

Modern innovation has also unlocked the solution to harnessing these oils in their most powerful state. The traditional processing methods employ either high heat or harsh chemicals to separate the seed oils from the flours, but these methods either damage valuable nutrients or contaminate the final products. Fortunately, the development of a chemical-free NatureFRESH Cold-Press™ technology has solved the problem. It gently presses and separates the seeds into oils and flours at low temperatures in an oxygen-free environment. The results are natural ingredients exhibiting unprecedented nutrient concentrations that preserve all of nature’s potency, purity and freshness.

What do you get when you combine the nutritional synergy of concentrated black cumin and black raspberry seed oils with the NatureFRESH Cold-Press technology? You get a superstar health product called Immuno-Viva® Core, providing comprehensive heart, immune and inflammatory support. This synergy is truly unsurpassed as a two-pronged solution for the two most pressing health needs—comprehensive anti-inflammatory support, and antioxidant protection for the entire body.

Balancing the Immune System
Essential fatty acids, as the name implies, are essential for good health, yet a staggering 99 percent of Americans are deficient in them. Why is this a problem? Because EFAs like omega-3 and omega-6 are needed by the body to support immune function, inflammation control, the uptake of nutrients, weight regulation, energy levels, fertility, bone strength, the balance of hormones and mood, regulation of gene expression, and brain, eye, skin and hair health. They are important building block to health, and Americans are not getting enough. 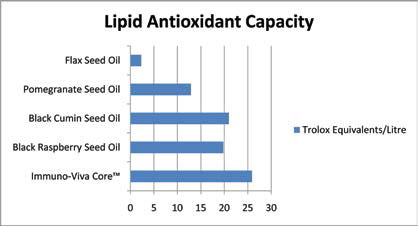 Even more important than the total amount of EFAs we take in is the ratio between the types of EFAs we get from our food. This is where the average American diet really fails us. Experts researching the dietary ratio of omega-6 to omega-3 fatty acids, suggest that in early human history the ratio was about 1:1. Currently most Americans have a dietary ratio that falls between 20:1 and 50:1, while an optimal diet should consist of roughly two–four times more omega-6 fatty acids than omega-3 fatty acids. This ratio imbalance and our overall lack of omega-3 in our diet can be boiled down to this: an omega-3 deficiency may be the single most widespread, health-damaging physical cause of degenerative diseases of our time.

This is where Core comes to the rescue. Its proprietary formulation provides all the necessary essential fatty acids (omega-3, -6, and -9) required on a daily basis, but it has an ideal omega-6/omega-3 ratio of 2:1. Not only that, but it also combines these EFAs with powerful lipid soluble antioxidants. The problem with most EFAs, such as those found in flax and fish oils, is their susceptibility to free radical damage which causes them to quickly become rancid. Core’s potent antioxidants, however, protect the EFAs and keep them stable for over 18 months.

The Highest Amounts of Lipid Antioxidants
Antioxidants are the body’s defenders against free radical damage. In the past we have generated adequate antioxidants from a bountiful diet of fruits and vegetables. However, it is estimated only 10 percent of the U.S. population consumes five servings of fruits and vegetables per day. Our nutrient deficient diets as well as on-going physiological and environmental stressors put us in desperate need of more antioxidant protection.

The unique synergy between black cumin and black raspberry seed oils has resulted in an exceptionally high number of lipid soluble antioxidants, which are the most active in protecting cell membranes from free radical attack. According to Dr. Arnold S. Leonard, a cancer researcher and retired professor of surgery at the University of Minnesota Medical School who has been studying Immuno-Viva Core:

“The real key is the number of different types of antioxidants Core contains. It has dozens of different antioxidants, including, all eight forms of vitamin E. The result is a powerful synergism. In other words, the combination of antioxidants found in Core is much more beneficial than the sum of its parts.”

In fact, Core has more antioxidant diversity than probably any other product available today, and it has 10 times more antioxidants than flax seed oil. (See chart.) This high antioxidant capacity combined with the potent EFAs make Core a unique health product that can help our bodies counteract the problems associated with free radicals and inflammation.

There have been many lab and clinical studies investigating the benefits of Immuno-Viva Core, and their results have revealed that:

Mounting scientific evidence extols the many health benefits of omega-3s and antioxidants. The FDA has approved claims that omega-3 may reduce the risk of heart disease, and that antioxidants can improve immune function. And countless studies have shown the benefits of these nutrients when given to people undergoing chemotherapy or suffering from arthritis or autism or obesity, or countless other conditions.

But perhaps the most important research is focusing on prevention. Core’s dual solution—comprehensive antiinflammatory support and antioxidant protection—can help comprehensively improve our natural defenses, and that makes staying healthy in the 21st century a whole lot easier. For more information visit www.immumo-viva.com, or talk to your health care professional.