The benefits of our modern way of life are many, but they come with a price, the pollution of our planet with its severe impact on health. The silent killers of the 21st century turn out to be the toxic heavy metals and chemicals that accumulate in our bodies over our lifetime.


The legacy of the past century was the creation of more than 80,000 chemicals. Each year the U.S. releases a staggering four billion pounds of these toxins into our environment contaminating the air, water, soil, plants, animals, and, of course, humans.

Mercury, lead, cadmium, arsenic, pesticides, insecticides, dioxins, furans, phthalates, VOCs, and PCBs are just some of the foreign substances that have created an excessive body burden of harmful chemicals.

Just how bad is it? Pretty bad. Most of us have between 400 – 800 potentially toxic, carcinogenic, endocrine-disrupting, and gene-damaging chemicals stored within our cells. Fetuses now grow in a womb contaminated with as many as 287 foreign chemicals, and more than 630,000 of the four million babies born in the United States are at risk for brain damage and learning difficulties due to mercury exposure in the womb. In fact, the level of mercury in umbilical-cord blood is 1.7 times higher than the level in the mother’s blood.

Is the cancer epidemic related to toxins? According to the Columbia University School of Public Health, 95 percent of cancer is caused by poor diet and environmental toxicity.

And it’s not just cancer. The systems most affected by these toxic compounds include the immune, neurological, and endocrine systems. Toxicity in these systems can lead to many chronic health problems including immune dysfunction, autoimmunity, asthma, allergies, cognitive deficits, mood changes, neurological illnesses, changes in libido, reproductive dysfunction, and glucose dysregulation.

Of all the toxic exposures, mercury is without a doubt the most destructive. It is a deadly neurotoxin causing psychological, neurological, enzymatic, and immunological problems. Mercury contributes to or causes all known illnesses including autism, autoimmune diseases, Alzheimer’s disease, cancers, heart disease, endocrine problems, and neurological and behavioral disorders.

The problem with toxins such as mercury and lead is that once they enter the body, they are difficult to remove. Toxic accumulation quickly overwhelms the body’s detoxification pathways and can ultimately result in severe symptoms or a chronic, debilitating illness. The alarming fact is there are simply no safe levels of exposure to any of these toxic contaminants.

One More Piece to the Toxicity Puzzle
A respected pioneer in the field of heavy metal detoxification, Dr. Dietrich Klinghardt, M.D., Ph.D. has determined there is a direct correlation between stored toxins and infectious pathogens. He states that “for each equivalent of stored toxins there is an equal amount of pathogenic microorganisms in the body.” The presence of stored toxins causes immune system deficiency that supports the growth of pathogens such as bacteria, viruses, fungi, and parasites.

The term Toxic Body Burden (TBB) is now being used in reference to toxic heavy metals, synthetic chemicals, and pathogens that enter and accumulate in the body. Retaining and restoring vibrant health requires an effective two-pronged approach that can detoxify toxic substances while simultaneously eliminating infectious microorganisms.

Zeolite—Removes Toxins Naturally
Zeolite is a naturally occurring crystalline structure created from volcanic ash that spewed into the atmosphere during violent eruptions over 300 million years ago. For thousands of years, civilizations throughout the world have used zeolite as a traditional medicine. More recently, zeolite powder was given to victims of the Chernobyl fallout to reduce radiation levels in their bodies. Zeolite is so effective in binding toxins that it is used as a molecular sieve to create purified, medical grade oxygen from air.

What makes zeolite so unique is its cage-like, honeycombed structure which is negatively charged. When ingested, this natural mineral attracts and irreversibly binds and removes toxic heavy metals, chemical elements, and free radicals through the urinary tract. This process is called chelation.

Many toxic poisons are positively charged and these toxins are attracted into the zeolite cage like the strong attraction of steel filings to a magnet.

One of the most significant benefits of zeolite over other detoxification agents is its affinity schedule for toxic heavy metals. Zeolite binds with mercury first and lead second, moving on to additional toxic heavy metals and chemical toxins which may include pesticides, herbicides, plastics, and even radioactive particles without removing precious nutrients such as calcium and magnesium.

However, zeolite goes far beyond the critical job of removing damaging toxins. Research has shown it has many other vital actions in the body. 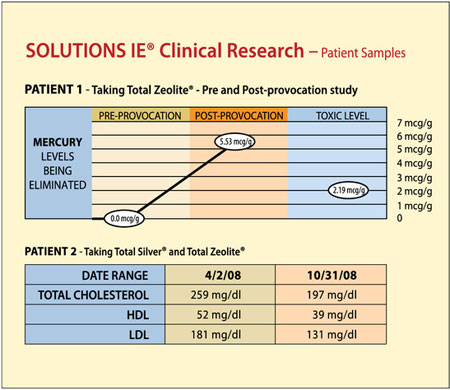 There is growing evidence that suggests zeolite is an immune modulator and can increase specific groups of T cells.

A Silver Lining Against Pathogens
What did doctors prescribe before the advent of antibiotics to combat infections? The medical profession used colloidal silver. In 1914 the medical journal Lancet reported phenomenal results from silver use stating it to be absolutely harmless, non-toxic to humans, and highly germicidal. In 1929 over 5 million prescriptions for silver-based products were issued in the United States alone. In fact, colloidal silver has proven itself useful against all species of fungi, parasites, bacteria, protozoa, and viruses.

For centuries dating back to Hippocrates, silver’s healing properties for both external and internal use for a variety of medical conditions was widely known. Properly formulated colloidal silver is, beyond a shadow of a doubt, one of the most powerful, yet totally safe, antibiotics known to man. With antibiotic resistant strains of bacteria increasing at an alarming rate, efficacious and advanced forms of colloidal silver are once again offering safe solutions.

Total Zeolite
Total Zeolite has many significant qualities which make it a superior choice over other detoxification or chelation methods, including other zeolite-based products. In urine challenge studies, Total Zeolite has been independently proven to increase urinary output of mercury, lead and other toxic metals by over 300 percent. It is interesting to note that extremely toxic mercury levels were recorded in the urine of patients while taking Total Zeolite who had undetectable mercury levels in their urine prior. These significant research results show just how difficult it is for the body to remove mercury and other toxins without an effective chelator present. Urine challenge (pre- and post-provocation) studies are the gold standard in measuring the efficacy of any chelating agent.

Traditional chelating agents have significant limitations in safely removing mercury, lead, cadmium and arsenic. One drawback is agents such as endrate (EDTA) have high affinity for essential nutrient minerals such as calcium and remove them simultaneously with toxins. If not carefully monitored, this removal of calcium can be quite dangerous and bring on rapid muscle weakness and potentially cause heart damage.

Another issue with acid-based chelators such as EDTA, DMSA, and DMPS is the phenomenon known as pull-and-drop. With a weak bond, these chelating agents can pull out a toxin such as mercury from the tissues and then drop the mercury into the bloodstream where it can redeposit in the brain or other vital organs. If this happens the patient’s condition is likely to worsen. With Total Zeolite toxins are tightly and irreversibly bound within the zeolite cage and safely eliminated though the urinary tract from the body within hours.

The strength of the zeolite bond is based upon:

Another quality which makes Total Zeolite such an effective chelating agent is a proprietary nano-technology which provides a significantly greater number of nanomized zeolite crystals per dose. This results in an exponentially greater zeolite surface area providing far more attraction and elimination of toxins than other chelation products.

Total Zeolite is also the only zeolite product manufactured using wetterwater©, a proprietary aqueous solution that is 43 percent lower in surface tension than natural water. This allows micronutrients to be more effectively absorbed through the mucosa to rapidly enter into the blood plasma, continue through the interstitial spaces and into the cells.

Beyond the ability of Total Zeolite to remove toxins from the body, it boosts the immune system, enhances the body’s metabolic function and nutrient absorption, alkalizes the body, and improves the body’s ability to resist disease.

Total Zeolite is demonstrated to be so safe that it can even be used by pregnant women, children, and the elderly. Provided in a 2 ounce Intra-oral spray (most competing zeolite products are more expensive and sold in 1/2 ounce dropper bottles), Total Zeolite is truly a powerful answer to our most pressing health problems.

Total Silver
The other partner of this dynamic duo is a unique silver-based antimicrobial called Total Silver. Extremely effective, Total Silver demonstrates a much broader pathogen kill spectrum than traditional prescription antibiotics, antifungal, or antiviral preparations. Far more advanced in both safety and efficacy than traditional colloidal silver, Total Silver is a 120 ppm (parts per million) cellular silver that has been proven capable of rapidly killing an enormous array of disease causing organisms—literally oxidizing the cell wall of gram positive and gram negative bacteria as well as naked virus/fungus, and all without damaging human tissue.

Covered by over ten patents to date, the unparalleled safety and efficacy of Total Silver makes this silver-based antimicrobial the first choice of health care professionals around the world.

Cleanse and Live Vibrantly
It is possible to live with severe Toxic Body Burden and still not “feel” toxic. This is the equivalent to driving down the freeway at 75 mph with bald tires. Everything seems fine until one of the tires blows. Countless victims of cancer and other life threatening diseases felt fine the day they were diagnosed. This is why toxins and pathogens are called silent killers.

Cleansing your body now is crucial to maintaining and restoring health. The healing powers of nature enhanced with 21st century technology has created Total Body Cleanse—the most effective, safe and affordable solution for the two greatest threats to optimal health today—chemical toxicity and chronic infections.