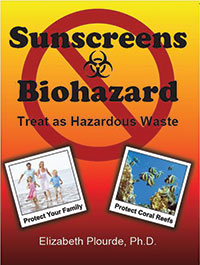 We have been told for years that the sun’s rays are harmful and we all need to slather on sunscreen chemicals to protect from skin cancers and skin aging.

The truths are that sunscreen use actually leads to: increased risks of cancer and increased photoaging.

Being a scuba diver and lover of coral reefs, I became very interested in sunscreens when my research uncovered that sunscreen chemicals kill coral within 96 hours of contact. Proof that sunscreens are involved in their death is that many of the reefs around Grand Cayman Island in the Caribbean have died, while their neighbor, Cuba only about 200 miles away, still has beautiful reefs. (This negates the idea that the death is due to global warming of the water as the difference in water temperature in 200 miles could not be that much. The difference is Grand Cayman has thousands of cruise ship tourists slathered in sunscreen chemicals snorkeling in the their waters every day.) Having witnessed the death of once spectacularly beautiful reefs, I decided to write a book in attempts to save our coral reefs.

I did not realize until I started researching in-depth that my background as a hormone specialist was necessary to understand the harm they are causing humanity as well. The sunscreen chemicals have very potent hormonal effects. They act as estrogens, anti-estrogens, testosterones, and anti-testosterones (some more potent than flutamide, the anti-testosterone medication given to prostate cancer patients to block their testosterone). As such, they disrupt adults’ and children’s, as well as the developing fetuses’ normal hormone balances. Once I saw the damage, I knew the only title for the book was: Sunscreens—Biohazard: Treat As Hazardous Waste.

With the potential of coral and hormonal harm, the use of sunscreens makes no sense. It makes even less sense when I also discovered that the whole premise of using a chemical to block ultraviolet (UV) solar radiation is on the wrong track. UV is only four percent of the total solar radiation that reaches our skin. Of this four percent, 95 percent is UVA and five percent is UVB, which is the portion that creates the sunburn. This means that stopping the sunburn only blocks 0.04– 0.2 percent of the entire solar radiation coming through the atmosphere. By far the most amount of radiation reaching our skin is the near infrared (NIR) rays that make up 47 percent of the solar rays. These rays penetrate much deeper and are capable not only of causing cancer, they breakdown collagen and elastin, which results in photoaging of the skin.

By stating that people can stay in the sun longer and blocking the UVB so they do not experience the sunburn, a false sense of security has been created surrounding sunscreens. What sunscreen use accomplishes is to turn off the body’s natural red warning light—the sunburn. Sunscreen promotion has led to the belief that we can stay in the sun 10, 20, 30, 40, and even 50 times longer than the body can handle safely. We believe it because we are not developing a burn. No sunburn, however, does not mean that damage is not occurring at a deeper level. The incidence of melanoma and basal and squamous cell skin cancers have been increasing since sunscreens were introduced in the mid 1970s, proving that rather than protect they leave us open to developing the cancers.

Since each chemical only blocks a small portion of the UV spectrum, several are added to the formulations in attempts to screen out the entire UV spectrum. Because the metals of titanium dioxide and/or zinc oxide reflect most of the UV radiation, zinc more completely than titanium, sunscreens are formulated with these as well. The metals in their natural state leave thick white residues on the skin. To lessen this effect, manufacturers have reduced their size down to nanometer and micrometer particles, so small they become transparent to the eye. However, this small size (1/5,000 the diameter of a human hair) allows them not only to enter the body, they are capable of crossing cell membranes, nuclear membranes, and the blood-brain barrier. These pieces of metal once inside the cell disrupt DNA and cell division, as well as kill cells in the brain.

Some manufacturers did become aware of the damage that reducing the oxides down to nanosize particles can create, so they developed slightly larger particles, labeled micronized, claiming that the new sizing was safer than nanosized. However, studies comparing their effects identify that whether it is micronized or nanosized, the particles cause increased cell division, abnormal sperm formation, testicular cell death, and abnormal bone marrow cell division. These effects could result in cancers, as well as infertility.

Many research studies (Sunscreen Biohazard has almost 800 references), which should have been done before the FDA approved sunscreen chemicals for use on the body, currently substantiate sunscreen chemicals are toxic and harmful rather than protective. Some of the research that demonstrates hormonal damage to developing fetuses took 12 years to reach publication, well after the message that all needed to use sunscreen to avoid skin cancer was adopted by the public in mass.

Tests on laboratory animals show the chemicals and metals pass through the placenta where they are capable of disrupting fetal programming, resulting in life-time obesity, thyroid metabolism disruption, and ADHD, as well as disrupted sexually dimorphic brain development, which results in young boys identifying they feel like a girl.

When pregnant laboratory animals are exposed to sunscreen chemicals their fetuses undergo developmental alterations that are also demonstrated in autistic children. When exposed to titanium dioxide, the mice offspring have large DNA deletions. The results of these studies make it imperative to stop the use of sunscreens, especially by young girls and women who are planning to have children.

It is also important to realize that the UVB rays that cause the sunburn are also the rays the skin needs to manufacture the body’s essential vitamin D. The continuing drumbeat of being told that the sun’s rays cause cancer, making people fear the sun, has led to a worldwide vitamin D deficiency pandemic. Vitamin D plays many essential roles throughout the body including reducing the risk of cancers, including skin cancers.

Sunscreen Biohazard lists many common sense habits regarding sun safe behavior to assure protective levels of this anti-cancer hormone, vitamin D. In addition, there are safe alternatives to harmful sunscreen chemicals, which are antioxidant foods and herbs. Finding that many studies had been conducted identifying these substances, the book includes a whole chapter, as well as a handy reference guide of all the foods that have been proven to provide natural protection from solar radiation.

Putting harsh chemicals and metals on our bodies to turn off our natural warning system is not the answer. Feeding the body a high antioxidant diet and honoring its warnings will decrease the risk of skin cancers and melanomas. We ask you to share this information for the protection of our vital life in the oceans of the planet, as well as protection of our health and that of our children.

More information regarding the book Sunscreens: Biohazard — Treat as Hazardous Waste can be found at www.sunscreensbiohazard.com

Elizabeth Plourde, CLS, NCMP, PhD is a health educator with degrees in both biological science and psychology. She is a North American Menopause Society certified menopause practitioner (NCMP), a licensed clinical laboratory scientist (CLS), as well as an advisory board member of the American Anti-Cancer Institute. She teaches her clients how to become informed consumers and their own health care advocates; with the goal that everyone obtains life-long vibrant health and vitality. and superior achievement in private practice.