BraTumIA is an actively tested innovative 3D technology that provides doctors with a superior picture of a brain tumor with the potential of improving tumor diagnosis accuracy and reducing costs.

Healthcare systems today can be improved dramatically through information technology such as the invention of the Brain Tumor Image Analysis computer program (BraTumIA). This innovative technology has been developed by a team of doctors and engineers at the University Hospital Bern and University of Bern in Switzerland. BraTumIA is a software tool which, within minutes, can analyze the volume of a malignant brain tumor in a 3D perspective, accurately measuring not only tumor volume but also the position of the pathology in the patient’s brain. This is a significant development in brain imaging technology that will empower doctors and has the potential to facilitate diagnosis and treatment monitoring while reducing health care costs.

Typically radiologists get Magnetic Resonance Imaging scans (MRI) of a patient’s tumor, which are a pile of two-dimensional images. “The appearance of gliomas in MR images can vary greatly, which renders their radiological analysis very challenging. Consequently, clinicians usually apply standardized two-dimensional measures instead of outlining the complete tumor in a three-dimensional fashion to capture tumor size. The latter, when performed manually, is quite cumbersome, it takes hours and can differ from clinician to clinician making the interpretations subjective. BraTumIA instead performs tumor volumetry within five minutes, and most importantly always does it in a consistent manner, so chances for error decrease significantly,” says Raphael Meier, one of the main developers of BraTumIA, a PhD Candidate at the Institute for Surgical Technology and Biomechanics at the University of Bern.

“The three-dimensional measurement of tumor size, called tumor volumetry, is usually desired but difficult to obtain,” says Meier. In clinical studies, volumetry was shown to be superior when compared to two-dimensional measures. The tumor volumetry, presented by BraTumIA program, automatically marks every pixel in an image, detects whether it is a tumor or not and examines it on a three-dimensional basis. Thus, relieving doctors from performing the task manually. In the output of the computer process a doctor obtains information about the volume of the tumor and the exact location in the brain. “Currently it is the only program that’s publicly available and can be downloaded for free and works without the need for human support,” says Meier.

According to the specialist, BraTumIA will not replace the clinician, but can assist him and save up to two hours of work, which gives the opportunity for a doctor to spend more time on other relevant tasks. But, accuracy is still of paramount importance and at the end the clinician will look at the output of the software and double check it.

Even more BraTumIA could also benefit patients suffering from multiple sclerosis, measuring multiple sclerosis lesions, and those who have suffered stroke. The interdisciplinary team in Bern is currently working on these two future versions of the software.

It is expected, for multiple sclerosis, BraTumIA could provide precise analyses of inflamed brain tissue in the white brain matter (plaques). With stroke patients the software will serve the purpose of risk analysis—to determine which parts of the brain are likely to remain damaged subsequent to treatment. BraTumIA has been tested in the research departments of more than 80 institutions worldwide including NHS Foundation Trust and the University of Dundee in the UK.

According to Professor Roland Wiest, Neuroradiologist and Leader of the Support Centre of Advanced Neuroimaging at the Bern University Hospital, “The precision segmenting of the tumor tissue is enabling us to use the image information to optimize the treatment on an ever more precise basis. This is hugely important, as new treatment strategies for gliomas— malignant tumors—can receive exact information on the growth data concerning the tumors.”

The tool was primarily designed for segmenting preoperative images, however, as Raphael Meier says, “The project intends to extend the software’s capability to segment postoperative images and then images overtime.”

The project was started several years ago by researchers Roland Wiest, Stefan Bauer and Mauricio Reyes, as part of Stefan Bauer’s PhD thesis. After completion of the thesis, the work has been continued by Raphael Meier (Institute for Surgical Technology and Biomechanics).

Current development of BraTumIA also benefits from contributions of master’s students who are pursuing their theses within the project group.

Based on request BraTumIA is made available to researchers and clinicians at no charge go to https://sites.google.com/site/stefanpbauer/home/research/bratumia 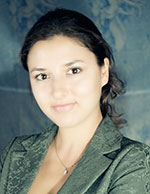 Olga Chiruk after graduating from the Institute of Journalism (Belarusian State University), Olga worked at newspapers in Belarus. She is currently studying MA International Journalism at Brunel University London and writing as a freelance journalist for both print and online media. Her interest in health issues was triggered by participation in Europa Donna’s European Breast Cancer Advocacy Training Course. She is passionate about the arts, and paints with oils in her free time.