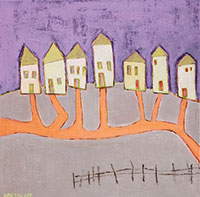 Physical illness is not an isolated incidence that is separate from one’s mental and emotional states. In fact, thoughts and attitudes trigger physiological conditions. For example, when we have a fearful thought, this thought instantly releases “fear” chemicals to specific locations in our bodies. As a result, we experience rushes of panic in our faces or chests. Similarly, when we have hopeful thoughts, chemicals are released that produce the experience of optimism, which might be felt in our hearts expanding with sensations of joy.

In other words, our bodies directly respond to our thinking and our thinking responds to our bodies. It is now widely accepted in scientific communities that the body and mind are indelibly interconnected and researchers have concluded there is no separation between the two. In fact, body and mind, with their mysterious and subtle links are indeed one back and forth, uninterrupted flow of chemical and neurological signals. Although science has acknowledged this fact, no one has been able to discover the precise art of healing utilizing the mind/body connection until the groundbreaking work of Dr. Akhter Ahsen, the world’s leading scientist and theoretician in the field of mental imagery. He has developed precise technology for healing the body through evoking mental and emotional images called Eidetics. According to Dr. Ahsen’s research, the brain is capable of producing all the chemicals needed for healing the body, from a common cold to multiple sclerosis.

Eidetic Images:
An eidetic image is a clear, lucid, visual image seen in the mind’s eye. Visualizing the eidetic not only stimulates a physical and emotional response in the body but also imparts meaning to the observer. Eidetic images are the records of our life that get stored in specific locations in the brain and continuously trigger chemical and neural signals to the body. They were first used by the ancient Greeks who understood their healing properties and called them, “The Gifts From the Gods” and have been scientifically studied at various junctures in history and into modern day. The study of these images reveals how one’s personal history impacts their current mental, physical and emotional health by bringing out hidden areas of conflict residing in the psyche. For example, a woman suffering with asthma was asked to picture an image of her parents in the house she grew up in as a child. She reported seeing them fighting and that she was feeling tension in her body.

When asked to see herself smelling the air in the house, she said that it was stale and hot from all of the human stress. While seeing the image, she noticed her chest contracting and that she was unable to breathe freely. In seeing the image of the house, other images and memories came to her of feeling traumatized by her parent’s stressful relationship. When asked to see herself standing on the threshold of her house and breathe in the pure air from the blue sky, she was able to take deep calming breaths and relax her lungs. Repeating this image many times over, she overcame the habitual somatic tensing of her lungs and was able to breathe freely again. The images of her parents fighting and the hot atmosphere in the house had become stored as eidetic images in her mind that sent neurological and chemical signals to her body, creating the asthma.

This image of one’s childhood home is one of the 30 specific images designed to test a person in order to discover the roots of their symptoms. Alongside the images that lead to illness, healing images are also stored within us. We are all born whole and complete and genetically endowed with all the gifts that nature provides us. The science of eidetic imagery brings forth both the images that reveal the roots of our symptoms as well the precise images that heal them.

House Image:
Here is an exercise involving the house in which you grew up, allowing you to experience an Eidetic image. If you lived in several houses choose the one that most spontaneously comes to your mind. You can see the image with eyes open or closed, whichever feels most comfortable to you.

The image may appear vague or vivid. Notice your emotions and bodily sensations as you do this.

Hopefully, the image of the house evokes a warm and harmonious family relationship. Notice whether the feelings you have in the house are the same feelings you sometimes experience in your life now.

What is Parkinson’s Disease? Parkinson’s is a progressive degenerative disease that affects the central nervous system resulting in the loss of nerve endings in parts of the brain inhibiting the secretion of dopamine to specific areas of the body. Dopamine is a chemical produced by the cells in the brain that is necessary for the smooth coordinated movement of muscles.

Most commonly, Parkinson’s begins with a tremor on one side of the body involving a finger, arm or leg. As the disease progresses more parts of the body are affected. In time physical mobility becomes impaired and the person suffers from increasing tremors, muscle cramps, stiffness, pain and motor imbalance. Simple activities such as crossing a street may become jerky and uncoordinated. Also, dementia occurs in some patients, while not in others.

The medical profession has no known cure for Parkinson’s. It is believed the disease is genetic. The most common form of treatment is the administration of dopamine, which works for a temporary period of time and then looses its efficacy. Unfortunately, the administered dopamine goes through the person’s entire system and cannot be targeted to flow to the specific areas that are failing. Neuro-stimulation treatments may also be utilized by implanting an electrode or pacemaker into the brain in order to stimulate nerve endings. However, this has not yielded effective permanent results.

Eidetic Treatment of Parkinson’s: Dr. Ahsen discovered that the inhibition of one’s natural expression and energy in childhood not only suppresses a person emotionally but also can affect their body manifesting in physical disease.

He found that those suffering from Parkinson’s have a history of childhood control placed upon their natural sensibilities. These mental images of control manifest later on in life in the physical symptoms of Parkinson’s. The images act like mine fields in the psyche influencing the release of inhibiting chemicals to the specific muscles involved in the early experiences of being restricted. For example, Charlie, a man whose father taught him how to throw a ball as a child and would explode in anger each time he did not throw the ball correctly. Charlie became uncertain in his own abilities. Thus, the stored mental images of his father’s outbursts impacted him sending the corresponding chemical and neural signals of tentativeness to his body and most specifically to his throwing hand. When he first developed Parkinson’s as an adult, the tremors began in his right hand, the very hand he originally threw the ball with. His muscle frailty eventually spread to other areas of his body affecting his total physical functioning. Regarding this phenomena, Dr. Ahsen states, “What cannot be carried out effortlessly and smoothly causes agitated shaking of that particular unit of muscles. If one can decipher the original historical event that became the sparking-off point for the symptoms, there is hope for recovery. When this source event cannot be brought into consciousness and developed into its original memory, the Parkinson’s symptoms may begin to spread to other connected muscle areas associated with the memory.”

The goal of the Eidetic treatment for Parkinson’s is twofold. The first is to retrieve the historical images that are at the source of the diminishment of one’s natural expression and vigor. The second is to retrieve the images of one’s innate potent ability that was inhibited by the events of their history.

When these healing images are brought forth, Dr. Ahsen found they not only regrow the injured nerve endings but also produce dopamine and other excitatory chemicals that flow to the specific areas of the body needed. As the success of the treatment showed the mind and body are one continuous flow of chemical and electrical signals and the Eidetic image is the most potent vehicle for accessing the memory mechanisms that directly impact brain functions.

In his article “Parkinson’s Syndrome: The Violence of Uncertainty,” Dr. Ahsen describes his treatment of a man is a condensed description of the treatment, which describes how one’s memory affects physiology.

A man in his 30s who came for Eidetic treatment was experiencing uncontrollable movements of his left arm up to his elbow and was developing slowness and rigidity in his right hand. The source images connected to these symptoms were of his learning to play the piano as a young boy. His father wanted him to become a great pianist and demanded he endure long and difficult practice sessions. As he was practicing, his father would constantly criticize him, which made him nervous.

Finally, he gave up playing completely in utter defeat. Dr. Ahsen asked him to place his hands on the desk in front of him and simulate playing the piano. As he did so, his arms and hands went through many spontaneous movements and he stated he could only play the slow songs.

His hands and fingers could not move in a fast and animated manner.

However, he suddenly expressed the sentiment: “In my heart, I still want to be a great pianist. There is this child in me still who wants to reach the farthest key and to strike the highest note.”

Thus, two image states existed simultaneously in his mind. One, of his playing slowly with impaired mobility, which was the result of his father’s yelling; and the other of his natural high-spirited capacity found in his desire to play the piano exuberantly as a great pianist.

Through various imagery instructions and maneuvers, Dr. Ahsen brought out the images of his natural energy skillfully working through many mental and emotional layers of inhibitions, inaccurate thoughts and perceptions, feelings of unease, states of fear, passivity and negative thoughts until he could play in a “high” state of elated passion with his natural abilities unhindered. He was encouraged to see himself joyfully playing the piano with both hands going fast, expressing himself fully as he had wished to do so as a child. Repetition of this positive image resulted in the cessation of the tremors of his fingers, hands and arms. As the success of the treatment showed, his nerves healed and the dopamine naturally flowed into his injured extremities. In fact, all of his Parkinson’s symptoms ceased and never returned. In addition it gave him the confidence to be his true radiant self in many areas of his life, not the uncertain self that was formed from his history.

Dr. Ahsen’s original scientific article “Parkinson’s Syndrome: The Violence of Uncertainty,” can be found in his book Memory Image published by Brandon House. Order the book by calling 914.476.5796 or emailing This email address is being protected from spambots. You need JavaScript enabled to view it., attention: Irene.