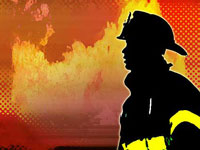 New Orleans, LA. Firefighters have a two- to four-fold higher risk of having a cardiac event—such as a heart attack or sudden death—on the job compared to the general population.

It appears that taking daily capsules of aged garlic extract (AGE) and Coenzyme Q10 (CoQ10) can slow—and may even reverse—the progression of atherosclerosis, a buildup of fatty plaque in the coronaries (heart vessels), within this at-risk population, according to research presented at the American College of Cardiology’s 60th Annual Scientific Session. ACC.11 is the premier cardiovascular medical meeting, bringing together cardiologists and cardiovascular specialists to further advances in cardiovascular medicine.

Firefighters taking this combination supplement were not only less likely to have a stiffening of arteries after one year, but their blood vessels actually became more flexible compared to those who did not.While researchers have previously reported that AGE can reduce the progression of sub-clinical atherosclerosis in an asymptomatic population, this is the first time AGE-CoQ10 was studied in combination and in individuals who are already at risk for atherosclerosis.

“Because of the many complications associated with atherosclerosis, including heart attack and stroke, we know that the best way to limit these outcomes is to prevent the development of atherosclerosis early on,” said Vahid Nabavi Larijani, MD, research fellow, Los Angeles Biomedical Research Institute and co-investigator of the study. “It appears that the earlier an individual starts to use these supplements during the preliminary stages of atherosclerosis, the more beneficial the effects. It can help to reduce vascular stiffness and actually retards the entire atherosclerosis process.”

In this double-blind clinical trial, 65 Los Angeles County firefighters with a moderate risk for plaque build-up (as determined by calcium scoring) were randomly assigned to take a placebo (sugar pill) or AGE-CoQ10 daily for one year. Those in the treatment group took four capsules per day, for a total dose of 1200 mg AGE and 120 mg CoQ10. Participants were not taking any atherosclerosis-preventing medications, such as statins.

Researchers performed coronary calcium scanning (CAC) and carotid-radial pulse wave velocity (PWV) tests at baseline to be able to determine the progression of atherosclerosis in each subject. Participants were then followed every three months to ensure adherence, conduct regular PWV tests and collect other lifestyle information (e.g., changes in stress or physical activity levels), and to report any adverse side effects. CAC scanning was repeated at one year. There were no significant differences between the cardiovascular risk factors between the AGE-CoQ10 and placebo groups at baseline (p>0.5).

At one year, firefighters taking AGE-CoQ10 had nearly half the rate of CAC progression compared to the placebo group (18 versus 31 percent change from baseline CAC measurements, respectively; p=0.01) even after adjusting for all conventional risk factors. The rate of PWV change, on the other hand, decreased by 5.6 percent in the AGE-CoQ10 group, but increased 9.1 percent in placebo group after one year. This was of note to authors because AGE-CoQ10 appeared to help reverse vascular stiffness, while the control group’s PWV measures worsened.

Larijani explains that while there is some uncertainty about garlic’s exact active ingredient and its mechanism of action, some scientists believe it has a similar effect on cholesterol synthesis as statins and can reduce the production of bad cholesterols in the liver. In doing so, it can also deplete natural levels of CoQ10, an antioxidant that can help fend off other chronic diseases such as cancer, coronary heart disease and Parkinson’s disease, which is why the researchers choose the AGE-CoQ10 combination for their study.

“These results are promising and should prompt further research into this treatment,” Larijani said. “For at-risk populations, taking this very cost-effective, easy step may slow down the progress or even prevent many serious complications of atherosclerotic heart disease further down the line. Taking garlic is like having a blood pressure medication, an aspirin and a cholesterol-lowering medication all in one pill.”

Individuals with moderate risk for atherosclerotic heart disease should consult their health care provider before taking this supplement as garlic can interfere with certain medications, and there are some contraindications for its use. It is not recommended for individuals with low blood pressure.

The study was sponsored by Wakunaga of America Co., Ltd. None of the authors on this study report any financial interest in the tablet.

For more information Contact Amy Murphy 240.328.4549 or This email address is being protected from spambots. You need JavaScript enabled to view it..