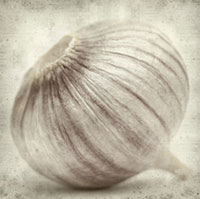 Garlic ranks highly among health promoting herbs. It has been used as a remedy for centuries, in traditional medicine and confirmed for its medicinal qualities by modern science; yet, in spite of the many health benefits of this unique herb many shun it because of the unpleasant side effects. Ingesting fresh garlic results in bad breath and body odor that linger for long periods and may cause gastrointestinal problems, such as flatulence and diarrhea. A popular alternative to the fresh bulb is the supplement Aged Garlic Extract™(Kyolic AGE) that is odorless and provides the health benefits of fresh garlic, and sometimes even more, without the side effects.

Aged Garlic Extract
High in organosulfur compounds and rich in antioxidants, AGE is manufactured by Wakunaga of America, from organic fresh garlic, by extraction and aging at room temperature. The process of extraction and aging converts unstable compounds, such as allicin, to stable substances and produces high levels of water-soluble organosulfur compounds that are powerful antioxidants that block oxidant stress. These include S-allylcysteine (SAC), AGE’s major component, and S-allyl mercaptocysteine, unique to AGE. Among other compounds present that have antioxidant activity are low amounts of oil-soluble organosulfur compounds, flavonoids, a phenol, allixin, selenium, and saponins. AGE is standardized by S-allylcysteine and is highly bioavailable, with a 98 percent bioavailability.

Extensive published research shows AGE to have anti-aging and anti-inflammatory effects with potential to reduce risk factors for heart disease, stroke and dementia. Recent findings show that AGE increases adiponectin, a protein secreted by fat tissue that has anti-inflammatory, anti-atherogenic as well as insulin sensitizing properties. As low levels of adiponectin play a role in the metabolic syndrome (MS) AGE has potential to help protect against this condition.

High cholesterol levels promote an inflammatory response in the arteries, which causes further accumulation of cholesterol in the artery wall. This in turn produces more inflammation. Eventually the deposited cholesterol hardens into a plaque, which can rupture and lead to the blood clots that cause heart attacks and strokes. When stroke occurs and the brain is depleted of nutrients and oxygen, the risk of neuronal death and dementia increase several fold. High cholesterol is also associated with increased levels of free-radical–producing â-amyloid peptides (Abeta), the hallmark of AD. Hypertension, that increases the risk of cardiovascular disease, contributes to cognitive decline seen in AD and the associated loss of memory, by increasing the number of neurofibrilar tangles and amyloid plaques in the brain that are hallmarks of the disease.

AGE Protects the Heart and Brain
Aged garlic extract has been shown to modulate cardiovascular risk factors in both clinical and preclinical settings, in close to 700 scientific and medical publications. The AGE protective effects on the cardiovascular system, also reducing risk factors for dementia, are of a wide range. AGE increases, by 30–40 percent, the production of nitric oxide (NO), a regulator of blood pressure and lowers blood pressure, thus protecting both the heart and the brain. AGE inhibits platelet aggregation and adhesion that play a role in atherosclerotic plaque formation, it lowers LDL and prevent its oxidation, reduces triglycerides and homocysteine. AGE elevates HDL cholesterol (the good cholesterol), and reduces smoking-related oxidative damage.

The lowering of cholesterol occurs in part by AGE blocking an enzyme involved in the production of cholesterol (3-hydroxy-3- methylglutaryl-CoA) by as much as 41 percent. The effect is additive with statins, the cholesterol-lowering medications. Important clinical studies at the University of California Los Angeles, found that AGE significantly inhibits the progression of coronary-artery calcification, a marker for atherosclerosis, thus reducing the risk of plaque formation and a heart attack. The same studies, authored by Dr. M. Budoff and colleagues also showed that AGE lowers homocysteine, triglycerides and LDL cholesterol, and increases HDL.

Protection of Blood Vessels
AGE protects the lining of blood vessels (endothelial cells) from oxidative damage and improves microcirculation, an important factor in lowering the risk of cardiovascular disease and especially significant in protecting patients with diabetes, whose microvasculature is severely damaged and their risk of cardiovascular disease greatly elevated.

AGE protection of the endothelium is mediated in part by lowering plasma homocysteine, an independent risk factor for cardiovascular disease, stroke, and AD. Homocysteine injury to the endothelium leads to vascular inflammation, which in turn may lead to coronary artery disease. Plasma homocysteine is elevated progressively with age, increasing the threat of these diseases in aging individuals and the protection by AGE highlights its importance as an anti-aging supplement.

Recent preclinical studies by Dr. N. Ide and colleagues showed that homocysteine lowered the output of nitric oxide (NO), a regulator of blood pressure and that AGE prevented the decrease, thus preserving NO output; AGE provided an additional defense against oxidative stress by increasing cysteine and glutathione levels, both powerful antioxidants and preventing the oxidation of glutathione by homocysteine.

AGE and Prostaglandins
AGE inhibit the production of the prostaglandins involved in inflammation, that is now considered an important risk factor in heart disease and dementia as well as other diseases such as cancer.

The prostaglandin studied plays a role in cardiovascular disease, by increasing the stickiness and adhesion of platelets and promoting constriction of arteries and atherosclerosis; it has been shown to be present in increased amounts in human atherosclerotic vascular tissue compared with healthy tissue. The decrease in 8-iso-PGF2q following AGE intake goes along with earlier findings of AGE decreasing platelet aggregation. This study further confirmed that dietary supplementation with AGE with its powerful antioxidant capabilities can protect against diseases, such as atherosclerosis and heart disease, which are associated with increased oxidative stress.

AGE and the Metabolic Syndrome
Metabolic syndrome (MS) involves a group of conditions that occur together and include hypertension, high blood sugar, excess body fat, high LDL cholesterol and triglycerides, low HDL and the presence of insulin resistance. MS increases the risk of heart disease, stroke and diabetes as well as cancer. The condition of metabolic syndrome is associated with a decreased production of a protein in fat tissues called adiponectin that is anti-inflammatory, anti-athrogenic and increases sensitivity to Insulin, which aids in controlling diabetes.

AGE has been found to come to the rescue. A clinical study by Dr. Arbelaez and colleagues found that AGE improved adiponectin levels in subjects with MS. In this study 23 patients received 1.2 grams of AGE a day for 12 weeks while another group of 23 received a placebo. After 12 weeks the treatment was reversed, those who received AGE now got the placebo and those on placebo received AGE for 12 weeks. The study found that AGE significantly increases adiponectin, a finding that has wide reaching health effects. Adiponectin modifies inflammation and oxidative stress protecting blood vessels against damage that can lead to cell death. Another mechanism that links the AGE increase in adiponectin to cardiovascular protection is the fact that AGE increases NO production as shown by Dr. N. Ide and colleagues and NO regulates adiponectin levels, which, as shown above, modulates risk factors in MS.

The Bottom Line:
Kyolic Aged Garlic Extract (AGE) is a natural, odorless antioxidant-rich garlic supplement, manufactured by Wakunaga of America from organic garlic. It is the most popular garlic supplement. Highly standardized by stable S-allycysteine, AGE is the preferred form of garlic used in medical and scientific research. AGE has consistently shown ability to lower risk factors for cardiovascular disease and dementia as well a cancer and the metabolic syndrome, offering a wide range of protection against disease, aging and MS.