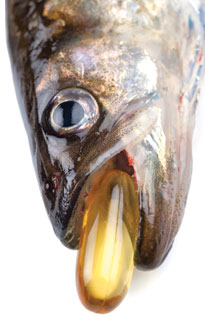 RESEARCH on the incredible health benefits of the omega-3s is published almost on a daily basis. The marine omega-3 fatty acids, DHA and EPA play a crucial role in the development of the brain, nervous system and the eye. Even the medical community has been caught up in the excitement. In 2002, the American Heart Association issued a scientific statement on the effects of omega-3 fatty acids on heart health. The statement endorsed raising our levels of DHA and EPA either by eating fish or by taking a daily fish oil supplement. The American Heart Association statement reviews omega-3s support of healthy heart rhythm, cardiac strength and the health of blood vessels.

Omega-3s strongly support the health of the brain too. Pregnant and nursing mothers are shaping the intelligence and happiness of their babies by supplementing with fish oil. Exciting studies show that children (and adults) with ADD and ADHD, dyslexia, dyspraxia and compulsive disorders experience a greatly improved quality of life when they take a daily dose of approximately 700 mg combined EPA and DHA.

Evidence also suggests EPA and DHA deficiencies may contribute to childhood disorders such as autism. One study examined the effects of 1.5 gram dose per day of omega-3 fatty acids (840 mg EPA and 700 mg DHA) in autistic children ages 5 to 17 years who were exhibiting severe tantrums, aggression, or self-injurious behavior. The children’s behavior improved, suggesting that omega-3 fatty acids may be aneffective treatment for children with autism.

For adults, omega-3s improve mood, memory, recall, reasoning and focus and support the health of the brain as it ages. Rush Medical Center in Chicago found that people with the highest levels of DHA had a 60 percent lower risk of Alzheimer’s than those with the lowest levels! Psychiatry department researchers at the University of Sheffield found that omega-3 fish oil supplements “alleviate” the symptoms of depression, bipolar disorder and psychosis.

The omega-3 EPA has a positive effect on your inflammatory response. EPA competes with pro-inflammatory arachidonic acid in the body. This means that EPA helps to regulate inflammation in the body, which may benefit painful inflammatory conditions like arthritis.

Arthritis is not the only inflammatory condition that benefits when patients take daily doses of DHA and EPA. Patients suffering with psoriasis, atopic dermatitis, and bronchial asthma experienced benefits by supplementing with DHA and EPA.

Reports of the beneficial effects on migraines caused excitement among millions of migraine sufferers. Decreased frequency and severity of migraine attacks were noted in a study at the University of Cincinnati. The majority of persons who took fish oils experienced a 40 to 50 percent reduction in both frequency and severity of migraine attacks while on fish oil supplements. The participants took nine fish oil capsules daily, (each capsule provided 180 mg of EPA and 120 mg of DHA).

Recent studies have found taking fish oils improved insulin sensitivity and reduced insulin resistance in older adults. Since insulin resistance may lead to type 2 diabetes, this is welcome news for those of us who want to stay healthy as we age. This builds on earlier research linking cod liver oil to a reduced risk of juvenile diabetes. The Norwegian Institute of Health established the role of omega-3 fatty acids in controlling diabetes. The study showed that giving cod liver oil to children during their first year of life reduced the risk of juvenile diabetes by as much as 25 percent.

We simply cannot afford to ignore the lifelong benefits of fish oils. At every age from the cradle to our golden years, omega-3s help to keep us vibrantly healthy, strong and sharp!

Jolie Martin Root is a Licensed Practical Nurse, a Licensed Nutritionist and a Medical Journalist in private practice in Denver, Colorado. She counsels and educates about the role of nutrition in integrative medicine. Jolie has been interviewed on dozens of television and radio programs and is one of the Natural Product Industry’s most vibrant public speakers. A prolific writer, Jolie’s articles have been published in many magazines and newsletters including Total Health, Alternative Medicine, Whole Foods, Taste for Life, Senior Living, First for Women, Prescription for Healthy Living, and Health Gems. A highly respected radio personality, Jolie is host of “Food for Thought” heard Thursdays 11am – 12 noon on WWRL AM 1600 New York City