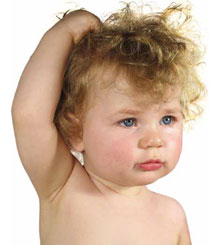 Every day you’re exposed to more than 123 chemicals through your skin and mouth—the vast majority of which have never been screened for safety! They’re even in your children’s personal care products…seriously!


When exposed to toxic chemicals, children are not miniature adults. Even small doses can affect their sensitive developing bodies, leaving them vulnerable to allergies and frequent bouts of infections, colds, and even behavior challenges.

In the February 2008 issue of the journal Pediatrics, it was reported for the first time that infants and children are exposed to toxins from everyday baby products, including shampoo, lotion, and powder. One such toxin is phthalates. The damage is specially harmful among baby boys and their reproductive system. Many other countries ban such ingredients, but unfortunately the U.S. Food and Drug Administration (FDA) does not regulate or assess for safety any personal care products.

The FDA does require testing for food additives and drugs, but personal care and cosmetic companies are not required to test ingredients for safety before they are sold. The Environmental Working Group (EWG), a non-profit research based, consumer advocacy organization based in Washington D.C. reports personal care products expose children to an average of 60 chemicals every day that they can breathe in or that absorb through their skin. EWG conducted product testing in partnership with Health Care Without Harm and other members of the Campaign for Safe Cosmetics. They found phthalates in three-quarters of 72 name-brand products tested. They go on to report that since federal law contains no safety standard for cosmetics, it is legal for companies to use ingredients that are reproductive toxins like phthalates, carcinogens, and other potentially harmful substances.

Depending on what’s in your child’s personal care products, there’s a potential for toxic overload. This means if your child uses only one product with its chemical content, their body’s immune system will be capable of filtering out the toxins. But, if you continually bombard your child’s vulnerable body with more and more chemicals, you may be overworking it!

Let’s look briefly at only one of these chemicals called phthalates (pronounced tha-lates). These have not been banned yet even though they have potential to cause reproductive problems in women as well as birth defects.

Phthalates are primarily used in the manufacture of plastics. But they’re also used as a solvent in a myriad of other materials, including personal care products like soap, shampoo, hair spray and nail polish, reports the Centers for Disease Control (CDC). Phthalates are even found in baby care products. It should come as no surprise, then, that the CDC reported recently that women of childbearing age were found to have high levels of phthalates in their bodies.

What’s more, of all the nearly 10,500 chemicals used in these products today, merely eleven percent of them have available safety data on them. These data, though, may be a formality, since little testing for the effects involving long-term exposure have ever been completed on them.

Phthalates are so pervasive, there is even a condition called “The Phthalate Syndrome”
It’s only been recently that researchers have delved into the possible damage long-term exposure to phthalates has on adults as well as children. For the first time a study has shown that a pregnant woman’s exposure to phthalate may affect the health of her unborn child.

Research actually reveals that being exposed to certain phthalates may trigger a condition in a developing fetus called “the phthalate syndrome.” Symptoms include the de-masculinization of the male reproductive tract. This increases the chances of the child being born with undescended testes, and a lower sperm count. The phthalate syndrome may also increase the man’s likelihood of developing tumors in the testes later in life.

Harmful ingredients in major brands of baby products are not uncommon
Pthalates aren’t the only toxic ingredient in baby personal care products. Perfumes, artificial dyes, BHT along with other harsh preservatives, strong detergents and salicylates are some of the other potentially harmful ingredients. The Feingold Association is a non-profit organization started by a pediatrician dedicated to helping expose how ingredients in foods and personal care products can trigger eczema, hives, asthma, headaches, dyslexia, irritability, infections, autism, PDD, ADHD and ADD.

Sodium lauryl sulfate is a common inactive ingredient in toothpaste as well as shampoos, skin care and bubble baths. It is a surfactant that forms lather to the formulas. Besides finding it in your child’s toothpaste, you may be surprised to learn it is a common industrial detergent used to clean oil off car engines. It’s true. You could use your child’s toothpaste to clean your car engine. Studies report of allergies and outbreak of canker sores with this ingredient.

Artificial sweeteners are another common ingredient in toothpaste for children. It’s amazing that as a culture we have become so addicted to sweets, we can’t even motivate our children to brush unless we add artificial sweeteners to them. Saccharin is the most often used which is banned in many countries. It used to be banned by the FDA, but is now accepted as safe.

Natural ingredients can be toxic too
Synthetic ingredients are not the only ones that contain toxic ingredients. A recent study in the New England Journal of Medicine (NEJM) reported three cases in which young boys aged four to seven began to grow breasts after using skin care products containing lavender oil and tea tree oil. The study concluded the oils appear to be endocrine disruptors. The endocrine system is a system of glands that secrete hormones directly into the bloodstream to control certain functions in the body. The body’s growth hormone, maturation of sex organs and metabolism are some of the functions the endocrine system controls. You can see why it’s important not to use any ingredients which might be endocrine disruptors. The study concluded that more research is needed on the effect of these and other potential endocrine disrupters added to personal care products.

Lavender oil and tea tree oil have been considered pretty safe and routinely found in many personal care products. Most consumers erroneously think herbs are innocuous since they are “natural.” What we don’t consider often is that pharmaceutical drugs are originally founded on herbs and plants. Extracts and essential oils are the most potent with the potential of side effects.

Teenagers are also subject to toxic ingredients since they are heavily marketed to by cosmetic companies. Cosmetics are another multi-billion dollar industry with harmful ingredients that are not regulated or tested for safety by the FDA.

Informed consumers make wise choices
We can’t turn a blind eye to the rise in allergies, cancer and other forms of chronic illness. Informed consumers make wise choices. It’s important to choose personal care products for your family very carefully. Endocrine disrupters and other toxins are found in our food and personal care products. To make wiser choices, you should: