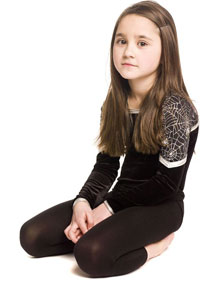 Julianne is a devoted mother to her beautiful and healthy-looking five-year-old daughter. But all is not as it seems-something strange is stirring in Sarah's body.

One night, while putting Sarah to bed, Julianne pulled the pajama top over her daughter's head, when Sarah suddenly exclaimed "Ouch! That hurt when you touched my nipple." Julianne was totally surprised by her daughter's response. Upon taking a closer look, she noticed that her nipples did appear to be different from what she had remembered. In fact, they looked bigger.

Julianne immediately called her pediatrician to schedule tests. The results confirmed that Sarah was going through puberty. The small lumps were, in fact, breast buds. Sarah's breasts were actually developing, but she was only five years old. How could this be possible? The doctor explained that Sarah had a condition called "precocious puberty."

Thinking the Unthinkable Early sexual development in girls, known as precocious puberty, seems to be happening everywhere. Presently one out of six eight-year-old girls in the U.S. are racing into puberty. It is a pattern emerging in young girls all over the world. Reports of early puberty have come from many diverse countries and climates including Australia, Britain, Canada, Europe, Asia and the Caribbean.

A Generation Ago The onset of menstruation has been steadily declining in Western countries. It wasn't very long ago when a teenager's first menstruation would arrive between the ages of 14 and 16. Today the average age of the first menstruation for girls is under 12 years of age.

A groundbreaking study in 1997 on 17,000 girls sent shock waves through the medical community. The study found that the initial signs of puberty were occurring much earlier than previously recorded. The study found that 27 percent of African-American and almost seven percent of Caucasian girls had the onset of secondary sexual characteristics, i.e. either breast development or pubic hair development, by the age of seven. By the time girls turn eight years old, one in seven Caucasian girls and 50 percent of Afro-American girls will be starting puberty. Even more startling was the finding that 1 percent of Caucasian and 3 percent of African-American girls showed these characteristics by the age of three.

How common is this trend? "Young girls in the five-to 10-year-old range with breasts and pubic hair-we encounter this every day in our clinic," says Michael Feemark, chief of pediatric endocrinology at Duke University Medical Center. Similar findings were reported from a study of 14,000 children from Bristol University's Institute of Child Health in the U.K.

The development of secondary sexual characteristics in girls is a significant event, signaling the onset of physiological and psychological ranges of profound importance. Many scientists and doctors are concerned. This is a worrisome trend as well as a very serious public health problem. Before they have outgrown dollhouses, many young girls are being faced with the confusing moods swings, hormonal changes and sexual attention that accompany physical maturation.

The ramifications to public health are dramatic. Studies have found that girls who reach puberty earlier tend to have sex earlier, increase the risk of pregnancy, experience more psychological stress, poor mental health, more behavioral problems, are more likely to drink, smoke, have a lower IQ and commit suicide. For boys, it can mean more aggressive, violent behavior, learning disabilities and more drug and alcohol abuse.

But the most disturbing consequence of early puberty in females is the well-established risk for pre- and postmenopausal breast cancer as well as ovarian cancer. According to a study that was published in the journal Nature (1989), the risk associated with having an early menarche-for instance, one that takes place at the age of 10-is approximately twice that associated with a menarche that occurs much later, say at the age of 16 or so. In addition, girls showing early signs of puberty also have increased risks of polycystic ovarian syndrome, acne, excessive facial hair and infertility.

Precocious puberty is also occurring in boys. It has now been discovered that boys as young as nine years old are developing mature genitalia, are producing sperm and have spontaneous erections. In addition, they have hair growth on the face, under arms and in the pubic area, along with acne problems. With surging testosterone levels, they are also preoccupied with girls.

Early puberty in males can increase their incidence of testicular cancer, lower fertility rates and impair growth, leading to a shorter stature.

What It All Means Since early puberty is a well-established risk for breast cancer, the earlier a woman reaches puberty, the longer her breast tissues will be exposed to potentially harmful-causing agents (chemicals, radiation and estrogen). According to Dr. Emily Banks, deputy director of Cancer Research at the U.K.'s Epidemiology Unit in Oxford, "We have known for some time that the younger a woman is when she starts her periods, the higher her risk of developing breast cancer later in life. The younger a woman is, the longer her overall exposure to high levels of estrogens."

Dr. Carlos Sonnenschein of Tufts University of Medicine warns, "The length and amount of exposure to estrogen is one of the most significant risk factors in breast carcinogenesis. Unless you are exposed to estrogens, you don't get breast cancer. The longer the exposure is, the higher the incidence. Therefore, if you decrease the age of the first menstruation, you are at higher risk."

The experts are confused. It is absurd to think that early puberty is the result of better nutrition, as many scientists assert. An increase in obesity in children and lack of exercise has a direct relationship to this problem. Between the late 1970s and the early 1990s, the percentage of overweight children nearly doubled. A protein called leptin may encourage early breast development. Fat cells produce leptin, which is necessary for the progression of puberty. Also, overweight girls have more insulin circulating in their blood. Those higher levels of insulin appear to stimulate the production of sex hormones from the ovary and adrenals.

Is it just the fast foods and sedentary lifestyle that are piling up the leptin-producing fat? Perhaps not. A 20-year study found that the greater the prenatal level of the hormone disrupter, polychlorinated biphenyl (PCB), the heavier the girls were at age 14 and thus statistically earlier their puberty. Could prenatal exposure to hormone disrupters play a role in obesity?

In fact, the really guilty party is looking more and more like hormone disrupters found in various foods, ingredients in personal care products and environmental toxins.

Events occurring in Puerto Rico helped to unravel this puzzling trend. For the past two decades, Puerto Rico has recorded the highest known incidence of premature breast development. Girls as young as two years of age were developing breasts.

Several reasons have been cited for this situation. First of all, most of these children were fed soy infant formulas. A 1997 Lancet study showed that soy has plant-based chemicals that mimic estrogen, displaying a wide range of hormonal activities. The daily exposure to infants who consume soy formulas was 6-11 times higher than adults who consume soy foods. In fact, the blood concentrations of these hormones in the children were 13,000-22,000 times higher than estrogen normally found in the blood.

Clues have also emerged implicating hormone disrupting chemicals. In a significant study, the breast development of the Puerto Rican children was linked to phthalate exposure, a ubiquitous chemical plasticizer. The researchers measured the presence of certain phthalates in the blood of 41 girls experiencing early breast development with a control group. The average age was 31 months. They found that 68 percent of the precocious puberty girls had high levels of phthalates in their blood.

The Silent Invasion Hormone disruptors, like silent saboteurs, have invaded the highly sensitive endocrine systems of our children. Whether from chemical exposure in the environment or from the hormone laden meats and dairy products, or chemically-laced personal care and household products, exposure to dangerous chemicals has now reached the highest level of exposure in the entire history of human civilization. Is there any wonder why precocious puberty is a worldwide epidemic? The fact that early puberty is a known risk for breast cancer should be of great concern to all parents. No one really knows the long-term consequences of early sexual development. This is an unprecedented experiment on our children.

Hardly a minute goes by without our being exposed to some chemical; perhaps it is car exhaust, room freshener, artificial fragrances, baby shampoo, dry cleaning, colored popcorn, furniture polish, fire retardant on new school clothes, plastic water bottles, fly spray and on and on it goes. Beginning in utero, our children are accumulating chemicals in their bodies, little by little, day in and day out for years and years. For some children the effects may become evident quickly while for others it may take many years or decades before the real harm-the cancers, the multiple sensitivities, the behavioral problems, the learning disabilities, the hormone imbalances and infertility or sterility become apparent.

With the red flags waving you would think that the medical profession would be leading the charge against contamination and exposure to hormone disrupting chemicals. After all, they are in the trenches, daily witnessing the rising number of children with precocious puberty.

It is therefore rather shocking that a report by a nationwide network of physicians suggested that it is perfectly normal for girls as young as six years old to be developing breasts. Perfectly normal? Instead of facing up to the implications of what is contributing to this aberration and leading the charge for immediate investigation into the causes and solutions, the medical community prefers to ignore a looming tragedy.

What can be done? There are solutions to precocious puberty. Holistic healing modalities such as Traditional Chinese Medicine, naturopathy and holistic medical approaches have been able to help get hormonal health back on track. Since children with symptoms of early puberty often have allergies, food intolerances, candida, digestive problems and high levels of toxicity, it is imperative to correct these health problems. The earlier these issues are identified and attended to, the greater the success of reversing early puberty.

In addition, it is imperative to reduce exposure to hormone disruptors. All hormone mimicking chemicals should be avoided, which include non-organic meat, dairy and produce, all commercial personal care products such as suntan lotion, shampoos and bubble bath, hormone disrupting chemicals found in pesticides, herbicides, plasticizers and commercial cleaning products.

Precocious puberty is a side effect of 21st century living. However, there is much that can be done to insure that children do not become teens before their time.

Excerpted from Sherrill Sellman's book Mother Prevent Your Daughters From Getting Breast Cancer (GetWell Int'l, 2004). Available at www.whatwomenmustknow.com or 877-215-1721