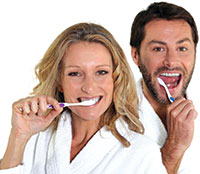 If I had a dollar for every not-so-pleasant discussion I’ve had over fluoride with various dentists over the years, well I’d be a lot better off than I am now. It’s not that I find talking about fluoride unpleasant, despite the fact that there isn’t much good I can say about the stuff, it’s more about the “Oh great another health nut” expression on the dentist’s face every time I refuse to have it anywhere near my mouth. We are led to believe fluoride is healthy for us, so much so that the very establishments that were put in place to protect us, introduce the stuff into the public water system in order to prevent dental decay. How noble of them if it were actually true.

Can’t Get Enough
The United States pioneered the introduction of community water fluoridation in 1945 when Grand Rapids was the first city in the world to fluoride public water.1 The FDA limits the amount of fluoride from 0.7 to 1.2 milligrams per liter of community water2 and today, almost the entire country and many parts of the world follow this practice. In the ensuing years, fluoride found its way into toothpastes, dental implants, dental treatments (think swish and spit), many antibiotics and even food.

If you are someone who doesn’t mind bathing or consuming fluoride, don’t you think you deserve to know; 1) if it’s actually doing anything to prevent tooth decay and 2) if it’s really as safe as you’re being told it is?

Have We Been Lied To?
Well I’m not going to waste a bunch of your precious time on answering question number one other than to say, if fluoride really did work like the American and Canadian Dental Associations would lead us to believe, why then do citizens of numerous cities, towns and countries who snub fluoridation show declining rates of dental decay in spite of increased sugar intake?3,4,5,6

To answer the second question, in spite of numerous potential problems with excess fluoride intake, I’m going to concentrate on one vital area—your hormones. Over the years, researchers have closely monitored the effects of long-term use of increased fluoride through several studies and have found evidence that it might have negative effects on our sex hormones. However, before I get into any specifics, let’s first take a peek into the steadily declining fertility rate in the U.S.

The birth rate in developed countries has been on a steady decline for some time now. Take for instance the decline in the United States, which went from 4,316,233 childbirths in 2007 to 3,941,000 in 2013 as reported by the CDC.7 While there may be several factors contributing to this decline, one cannot ignore the vital importance of our sex hormones when it comes to fertility and the profound ways fluoride impacts them.

Fluoride And Men
Let’s first look at the effect of fluoride on male sex hormones. Male sex hormones are called androgens and testosterone is the main androgen that enables our reproductive function.8 Recent studies have shown that when it comes to testosterone production, men should be quite careful of what they choose to put on their toothbrushes. Researchers from China conducted a study on males between 18 and 50 years of age who lived in three separate villages. While one group was exposed to high levels of fluoride, the other was not. The study results clearly indicated that prolonged exposure to fluoride could greatly reduce testosterone levels in otherwise healthy men.9

Another collaborative study conducted by researchers from Waterloo, Canada, China and Chengdu goes on to show that fluoride causes decreased sperm count, disturbances in the levels of sex hormones, reduced fertility and even alterations in the male reproductive system. The study goes on to say that increased exposure to fluoride can cause deficiency of zinc in the testes leading to testosterone suppression and shrinking of your family jewels.10

Fluoride And Women
Another Chinese study conducted on rats of the lady variety (I had to) brings to light the devastating effect that fluoride can have on female sex hormones and the reproductive system.11 During the study, the rats were divided into three groups and each group was given fluoride in varying degrees over a period of six months. Luteinizing hormone, folliclestimulating hormone, progesterone, testosterone, and estradiol were continuously monitored over this period. The study found that the reproductive hormone concentration in all three groups had significantly declined. The study subjects even demonstrated damage to their uterine and ovarian structures.

The National Center for Toxicological Research released an 18-year study of women (this time of the human variety) between the ages of 10 to 49 from different counties with varying fluoride exposure through the public water systems. Their conclusion was the total fertility rate of women in areas with higher fluoride exposure was significantly lower in comparison to the ones that had lower exposure.12

It’s bad enough that we may be creating hormonal mayhem within our own bodies when it comes to excess fluoride consumption, but what about our mini me’s? According to the official website of the European Union, if a child between the ages of one and six years drinks more than a liter of fluoridated water, that child could be receiving excessive fluoride.13 Now, if we add the amount of fluoride that they take in through toothpaste and other means, it is clear that we are subjecting our children to excessive levels from a very early age. This means that we may be inadvertently pushing our children towards sex hormone imbalances later on in life.

Here’s one last deep thought for when you’re brushing your teeth with your favorite fluoridated toothpaste and gargling afterwards with fluoridated water. If fluoride is so safe, why does every tube of toothpaste that contains it have a warning that reads: Keep out of reach of children under six years of age. If you accidentally swallow more than used for brushing, seek professional help or contact a poison control center immediately. Deep thoughts!