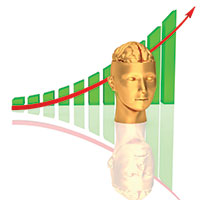 Depression is characterized by low mood, loss of pleasure, or changes in sleep or energy, that are not associated with recent grief or another underlying medical condition. At any time, it affects an estimated 9 percent of the U.S. population, and is projected to have the second greatest contribution to lifetime disability (behind cardiovascular disease) by the end of the decade.1,2 Part of the multimodal approach to management of chronic clinical depression can involve the biochemical balance of brain chemicals to alleviate symptoms; most first-line pharmaceutical treatments function by increasing the activity of one or more neurotransmitters (brain chemicals responsible for many of the aspects of cognitive function), particularly serotonin. In the central nervous system (CNS), serotonin has been implicated in regulation of sleep, depression, anxiety, aggression, appetite, temperature, sexual behavior, and pain sensation. 3

Depression has also been linked to poor nutritional status.4 This is not surprising, as the precursor to serotonin (tryptophan) is itself nutritionally essential, and its conversion into serotonin requires sufficiency of several B-vitamins and minerals. Additionally, deficiencies in other essential dietary constituents (omega-3 fatty acids, folate, vitamin B12) adversely affect mood by mechanisms that are not fully understood. Here, we discuss the role of several of the nutrients involved in mood regulation, and survey clinical data, which suggest a potential role for supplemental nutrients in mitigating the symptoms of depression.

Tryptophan and 5-hydroxytryptophan
Tryptophan is an essential amino acid (one which humans cannot synthesize, and must therefore be obtained directly from the diet). It is the precursor to the neurotransmitters serotonin and melatonin (the hormone involved in the sleep-wake cycle), as well as niacin (B3), the vitamin critical to a myriad of metabolic reactions ranging from energy production to hormone synthesis. Tryptophan is also used in the construction of many of the hundreds of structural proteins and enzymes required for life. The World Health Organization recommends a dietary tryptophan intake of 4 mg /kg/day for adults (about 270 mg for a 150 lb. adult); the average Western diet contains about 0.5 g of tryptophan daily.5 Despite the relative abundance of tryptophan in the diet, typically only 2–3 percent is used for serotonin production in the central nervous system.6

To synthesize serotonin, tryptophan must first be converted into 5-hydroxytryptophan (5-HTP). The formation of 5-HTP is the rate-limiting step in serotonin production (the most time-consuming part of the conversion process and the step most likely to be disrupted by nutritional and physiological factors including stress, insulin resistance, vitamin B6 or C deficiency, or insufficient magnesium.)7 5-HTP is available as a dietary supplement; it is produced commercially by extraction from the seeds of the African plant, Griffonia simplicifolia and has been used clinically for over 30 years. 5-HTP is well absorbed from an oral dose (with about 70 percent ending up in the bloodstream) and is not affected by other amino acids in the diet, so it can be taken with meals.8 Additionally, unlike tryptophan, supplemental 5-HTP cannot be used to make niacin, or incorporated into proteins, so the entire dose is restricted to serotonin production.

Although over one hundred trials have examined the efficacy of supplemental tryptophan or 5-HTP for treating depressive disorders in adults, only a few have been scientifically rigorous (randomized, blinded, and placebo controlled).9,10 These controlled trials have been generally positive: over half of volunteers taking 5-HTP (ranging from 50 mg–3 grams/day) or tryptophan (3 g/day) saw moderate to marked improvement in symptoms of depression, and this antidepressant effect was superior to that of placebo.11

Increases in brain levels of serotonin also signal satiety, while decreases signal the desire to eat.12 Multiple studies have shown that dieting can reduce circulating tryptophan levels by 14–23 percent; this can lead to increased hunger, depressed mood, and difficulty in maintaining weight loss.13 Both supplemental tryptophan and 5-HTP have been successful in increasing the feeling of fullness in obese volunteers when taken before a meal, leading to deceased calorie intake and a possible reduction in carbohydrate cravings.14,15

S-Adenosylmethionine (SAMe)
SAMe is central to several important synthetic reactions, including those that produce some amino acids, DNA bases, and natural antioxidants. Although the exact mechanism for SAMe’s antidepressant activity is unclear,16 it is thought to involve its role in the production of neurotransmitters. 17 SAMe is also important for the synthesis of phospholipids (the components of the lipid membranes that surround cells. Proper phospholipid metabolism, particularly in neurons (nerve cells), may positively affect brain function and mood.18

A number of studies suggest a role for SAMe in improving depression symptoms. Three meta-analyses of SAMe supplementation (critical reviews of several clinical trials on a particular treatment, which try to determine whether claims of positive benefits are generally supported by high-quality data) have shown it more effective than placebo in the treatment of major depressive disorders.19,20,21 Effective dosages in these studies ranged from 200 to 1600 mg per day, and most were short-term studies (six weeks or less; the long term efficacy of SAMe has not been as thoroughly studied). SAMe has also been compared with the older tricyclic antidepressants in several studies, and has shown an equivalent degree of efficacy (studies comparing it with newer antidepressants are lacking). When combined with conventional antidepressant treatments (selective serotonin reuptake inhibitors), SAMe could improve the rate or speed in which depressed individuals responded to these drugs.22

It is important to note that in many of the trials of SAMe in depressed patients, the nutrient was given by intravenous or intramuscular injection; the lower oral bioavailability of SAMe should be considered when interpreting the results of these clinical trials. 23

B-vitamins. Several B-vitamins, particularly vitamin B3, B6 B12 and folate, are directly or indirectly involved in the production of serotonin and other neurotransmitters. Vitamin B3 (niacin/ nicotinic acid) has roles throughout human metabolism, most notably in the production of chemical energy, and the metabolic reactions that both break down and create fats, proteins, and carbohydrates. Because of its ubiquitous role in metabolism, sufficient levels of niacin are paramount. While usually thought of as a nutrient that must be obtained through the diet, niacin can be synthesized in the body from dietary tryptophan. Under conditions of niacin deficiency, available tryptophan may be diverted from serotonin synthesis to make vitamin B3, because the body prioritizes niacin manufacture over serotonin.24

The three dietary forms of vitamin B6 (pyridoxine/pyriydoxal/ pyridoxamine) are converted in the liver to pyridoxal 5’-phosphate (P5P), the main circulating form of the vitamin. P5P is the coenzyme for several important reactions in amino acid metabolism, including their synthesis, breakdown into energy, and their conversion into other neurotransmitters and hormones. In particular, vitamin B6 is required for the enzymatic conversion of 5-HTP to serotonin. Age can increase the likelihood of B6 deficiency.

Both folic acid and vitamin B12 (cobalamin), along with SAMe, are important cofactors for several reactions that figure heavily in central nervous system metabolism, including neurotransmitter synthesis, and the maintenance of fluid cell membrane that preserves the activities of neurons. Deficiency of cobalamin or folate has been linked to depression in some studies (although results have not always been consistent)25 and experimental and clinical studies have shown that folic acid deficiency can cause irregularities in neurotransmitter synthesis.26 Although folate may not work as an antidepressant therapy on its own, patients with sufficient folate levels tend to have shorter and less frequent depressive episodes, and better responses to conventional anti-depressant treatments.