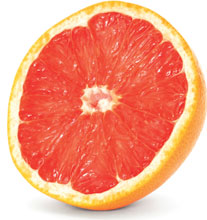 Let’s get real. Some foods make it really difficult to lose weight. They create their own self-sustaining cravings (“Betcha can’t eat just one!”) and play havoc with your blood sugar and, ultimately, your waistline.

But some foods do just the opposite.

By now almost everyone knows how great foods like broccoli and blueberries are and how they can help you lose weight, but here are some foods you may not have thought of when you first saw the title of this article. Yet every one of these foods (and one beverage) meets at least one major criteria of being a superfood for weight loss. Make these foods part of your daily diet and watch the pounds come off!

1. Grapefruit.
Remember the old “grapefruit diet”? Turns out there may actually be something to back up grapefruit’s reputation as a fat fighter. In a recent study at the Scripps Clinic in La Jolla, researchers studied the effect of grapefruit on weight loss and found that eating half a grapefruit before meals actually helped people drop weight. The researchers studied the effect of grapefruit capsules, grapefruit juice and real grapefruit. All three seemed to help, but the folks eating the real grapefruit got the best results. The mechanism isn’t completely understood but the results speak for themselves. As an added benefit grapefruit contains cancer fighting compounds like liminoids and lycopene, and red grapefruit has been shown to help lower triglycerides. And a half of a grapefruit has only 39 calories!

2. Sardines.
I call sardines one of the greatest health bargains of all times, and it’s definitely a boon to anyone wanting to lose weight. Why? First of all it’s loaded with protein, which helps stabilize blood sugar, makes you feel full (and less like overeating) and helps stimulate metabolism. Second, it’s a great source of omega-s, which not only strengthen the cardiovascular system, but are helpful in boosting mood. (When you’re in a good mood, you tend to crave less junk food!) Third, sardines are convenient, easy to find and cheap! And because they’re very low on the food chain, they’re remarkably free of contaminants.

3. Pumpkin.
You may only know this vegetable for its central role in Thanksgiving celebrations, but it’s one of the great weight loss foods of all time. Plain old canned pumpkin is absolutely loaded with fiber- each 1/2 cup serving has a whopping eight grams and only a mere 40 calories. Dozens of studies confirm that high fiber intake is associated with a host of health benefits, not the least of which is weight management. And here’s the deal: it’s the easiest food in the world to prepare. You can sweeten it with some Xylitol (or even Splenda), sprinkle it with blood-sugar lowering cinnamon (and nutmeg for good measure), throw in some healthy almonds, and make it into one of the best tasting weight loss treats around. It’s filling and it’s delicious.

4. Grass Fed Beef.
I’ll be honest with you—meat is a great weight loss food, but it’s hard to recommend it if it’s filled with antibiotics, steroids, and hormones. Get grass-fed and avoid the problems while getting all the terrific benefits. (Buffalo burgers are a good alternative if you can’t find grassfed beef). Higher protein diets are associated with weight loss for a variety of reasons. Protein stimulates the metabolism, helps you feel fuller longer, and helps decrease the desire to overeat. High-protein breakfasts are one of the best weight loss tricks in the book (try a buffalo burger for breakfast sometime and see what I mean!). And grass-fed beef has a high omega-3 content giving you multiple health benefits as a bargain.

5. Green Tea.
OK technically it’s not a food, but it’s one of the great weight loss beverages of all time. Rich in antioxidants, promotes heart health, aids digestion and regulates blood sugar and body temperature. It raises the metabolic rate and speeds up fat oxidation thus helping people lose weight. Drink daily to boost your metabolism. Some research has shown that five cups a day is the magic number for fat loss. As an added benefit, the theanine in green tea is also a great natural de-stressor.

Again, let’s be clear. Just eating (or drinking!) these foods won’t automatically “cause” weight loss. But these five selections are outstanding examples of the type of foods that do not create their own cravings or leave you wanting to eat more, that are low in sugar, and that will fill you up and satisfy (thus cutting down on the possibility of overeating a few hours later).

And they’re hardly the only foods available that will do that. By choosing meals that are high in protein and fat, relatively low in carbs and reasonable in calories, you will be creating a hormonal environment that is favorable to fat loss and inhospitable to fat storage. In my program, “Unleash Your Thin,” available starting in September on my website, www.jonnybowden.com we call this favorable hormonal environment your “fat burning switch.”

If your “fat burning switch” is disabled or permanently in the “off position,” it’s going to be fiendishly difficult to lose weight. And what disables your fat burning switch are meals that are high in sugar, calories, carbs or some combination thereof. These foods raise your levels of insulin which not only stores fat, but also “locks” the doors of the fat cells so that they can’t release their goodies into the bloodstream to be “burned” and excreted. To turn your fat-burning switch to “on” you need to bring down your insulin levels and the only way to do that is with diet.

Choose low sugar, high fiber, high protein foods and don’t worry so much about fat. Eliminate the obvious sources of sugar (candy, soda, desserts) and the insidious sources of sugar that aren’t as obvious but which have just as profound an effect on your hormonal environment and your insulin levels (i.e. cereals, pasta, rice, potatoes, bread). Stock up on metabolism-boosting protein, neutral fats (saturated and unsaturated—just no trans-fats!) and high fiber carbs like vegetables, or fruits like apples, berries, grapefruit and avocado.

Before you know it, the weight will be dropping off and you’ll find yourself feeling healthier, more energetic and trimmer than you’ve ever been in your life!