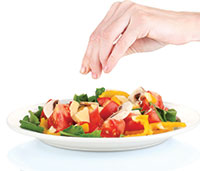 The Cochrane Library is a widely respected scientific organization that analyzes previous studies (a so-called meta-analysis) on a topic and reaches “evidence-based” conclusions about what’s likely to work and not work in medical practice. In May 2012, they published a meta-analysis that looked at seven studies on salt and health involving more than 6,000 people. Their conclusion? “We didn’t see big benefits” from salt restriction, said the lead author of the study, Professor Rod Taylor from the Peninsula College of Medicine and Dentistry at the University of Exeter. No lower risk of heart disease. No lower rate of early death.

Another recent study analyzed data from the government’s National Health and Nutrition Examination Survey (NHANES)—one of the most respected (if not the most respected) nutritional databases in the country. It found the lower the intake of salt, the higher the risk of death!

So do take the advice to “restrict” the salt in your diet with a grain of salt—in fact, a lot of grains of salt! Now, I’m not saying that the insane amounts of salt added by food processing is a good thing—it’s not. But I am saying that of all the things we need to worry about for better health, salt isn’t that big of a deal—with the exception of people who already have high blood pressure or congestive heart failure.

Bottom line: let your taste buds be your guide to the right level of salt. If you want more salt, salt away!

Most importantly, for people with CFS and fibromyalgia, restricting salt is a setup for crashing and burning, and is very ill-advised—especially in summertime, when you sweat and have more salt loss.

Salt restriction is also a terrible idea if you have adrenal exhaustion. How do you know if you’ve got that problem? The symptoms include intense irritability when hungry, low blood pressure, and a tendency to collapse physically, mentally and emotionally when you’re under too much stress. Salt supports the adrenals.

And when I’m talking about salt, I’m not just talking about sodium chloride, or table salt. Saying sodium chloride is the be-all and end-all of salt is sort of like saying the human being is $5 worth of chemicals and nothing more. When you’re at home, consider using sea salt, which is a complex combination of minerals. I think it has many health benefits that are not yet understood by our current medical technology.