Although I typically write about nutraceuticals, I thought I’d address a different topic for this issue: whether or not organic foods are actually better than conventional foods. It’s a question I’m often asked.

Statistics & Definition
Over the past few decades, sales of organic foods have consistently increased. U.S. organic food sales in 2018 were no exception. According to Nielsen Homescan household projected data, organic food sales during the 52 weeks ending November 28, 2018, rose nearly nine percent over the previous period, surpassing $21 billion.1 Clearly, consumers are willing to pay the typical 10 to 40 percent higher price for organic foods over conventionally produced foods. But why? According to one survey2, the main reasons consumers purchased organic foods were for the avoidance of pesticides (70 percent), for freshness (68 percent), for health and nutrition (67 percent), and to avoid genetically modified foods (55 percent).

Now that we know why consumers buy organic food, let’s define organic food. According to the U.S. Department of Agriculture:

Organic food is produced by farmers who emphasize the use of renewable resources and the conservation of soil and water to enhance environmental quality for future generations. Organic meat, poultry, eggs, and dairy products come from animals that are given no antibiotics or growth hormones. Organic food is produced without using most conventional pesticides; fertilizers made with synthetic ingredients or sewage sludge; bioengineering; or ionizing radiation. Before a product can be labeled “organic,” a Government-approved certifier inspects the farm where the food is grown to make sure the farmer is following all the rules necessary to meet USDA organic standards. Companies that handle or process organic food before it gets to your local supermarket or restaurant must be certified, too.3

After reading the USDA’s definition of organic and the results of the previously cited consumer survey, one might think that organic foods would be universally accepted as being healthier than conventionally grown foods. However, this is not necessarily the case. For example, the USDA “makes no claims that organically produced food is safer or more nutritious than conventionally produced food.”4 So, does this mean that the public has been duped and there is really no significant benefit to using organic foods over conventional foods? To answer this question from a scientific perspective, let’s examine the research.

The Research on Organic Foods

In a study on the “Nutritional Quality of Organic Versus Conventional Fruits, Vegetables, and Grains,”5 organic crops were found to contain significantly more vitamin C, iron, magnesium, and phosphorus and significantly fewer nitrates than conventional crops (see chart on following page). There were nonsignificant trends showing less protein but of better quality and a higher content of nutritionally significant minerals with lower amounts of some heavy metals in organic crops compared to conventional ones.

In other research, organic crops contained a significantly higher amount of certain antioxidants (vitamin C, polyphenols and flavonoids) and minerals than conventional ones. Moreover, there was a lower level of pesticide residues, nitrate and some heavy metal contaminations in organic crops compared to conventional ones. A relationship was seen between the different fertilization and plant protection methods of these two plant production systems and the nutritional composition of crops. The conclusion was that organically produced plant-derived food products have a higher nutritional value, including antioxidants than conventional ones.7 Furthermore, due to the lower level of contamination in organic crops, the risk of diseases caused by contaminated food was thought to be significantly reduced. 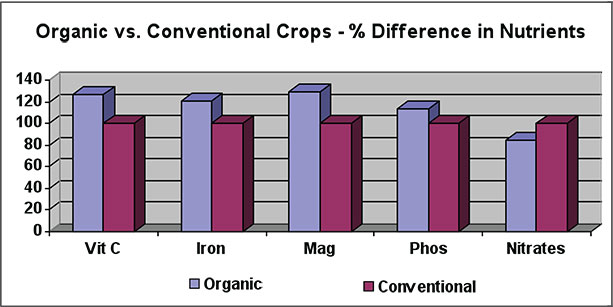 According to Organic farming, food quality and, human health: A review of the evidence8, “A comprehensive review of existing research reveals significant differences between organically and nonorganically grown food. These differences relate to food safety, primary nutrients, secondary nutrients [aka, phytochemicals] and health outcomes demonstrated by feeding trials.” With regard to food safety:

Nevertheless, not all studies have shown higher levels of nutrients or phytochemicals in organic goods. In a review9 of eleven studies comparing organic and conventional foods with respect to nutrient/phytochemical levels, nine of the studies demonstrated higher levels while two of the studies found no differences. Of course, nine out of eleven studies are still reasonably impressive.

Even in research that did not find strong evidence that organic and conventional foods differ in concentrations of various nutrients, other health benefits were still seen in organic foods (e.g., a reduction in nitrate content10), and reasonably consistent findings were still seen for higher nitrate and lower vitamin C contents of conventionally-produced vegetables.11

On August 22, 2002, Dr. Erik Steen Kristensen of the Danish Research Centre for Organic Farming presented data on food safety from an organic perspective at the 14th International In a presentation given at a European conference on organic food and farming12, the impact of organic foods on health and safety was addressed. The data presented showed overwhelmingly positive results for both health and safety (see table below). 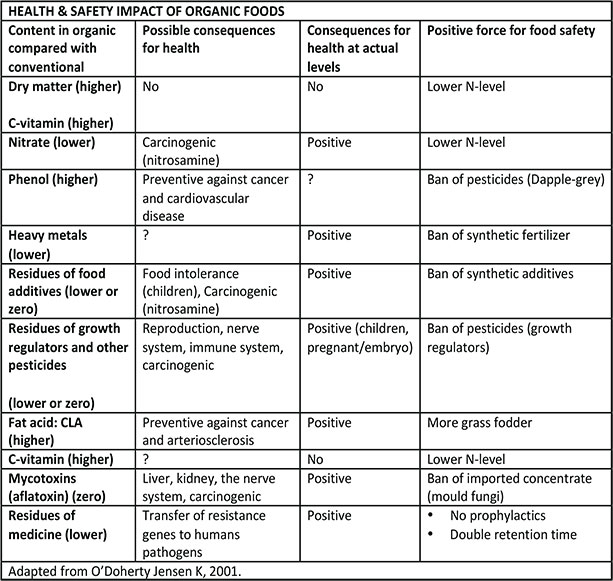 The Research on Organic Farming

In addition to nutrition and health, another area of consideration associated with the benefits of organic foods, or more specifically organic farming, is biodiversity. Organic agriculture has been confirmed as environmentally sound and more sustainable than mainstream agriculture. In fact, the World Wildlife Fund supports organic farming because it benefits people and nature:

It is a system that is essential for conserving biodiversity, especially in the center of fields. It avoids the release of toxic pesticide residues into the environment, and it supports rural development, fair trade, food safety, animal welfare, and market-oriented production. No other farming system encapsulates all these benefits and in a way that the public can easily recognize.15

A research project conducted by Britain's Soil Association and sponsored by the World Wildlife Fund indicated that in most studies important differences have been found between the biodiversity on the organic and conventional farms, generally with substantially greater levels of both abundance and diversity of species on the organic farms. This includes:16

The general consensus of other research17,18 comparing conventional and organic systems of farming was that organic farming is less damaging to the environment for the following reasons:

Further to this last point, one study19 found a 20 percent smaller yield from organic farms using 50 percent less fertilizer and 97 percent less pesticide. In addition, a study20 in 2007 compiled research from 293 different comparisons between organic and conventional farming to assess the overall efficiency of the two agricultural systems. The authors concluded, "Organic methods could produce enough food on a global per capita basis to sustain the current human population, and potentially an even larger population, without increasing the agricultural land base."

One researcher pointed out that, related to the environmentally sound nature of organic farming, the consumers' well-being is based on the certainty "that by purchasing, eating and enjoying organic food, one has contributed to a better future and an improved environment. These effects with their social implications along with improved animal welfare may, in the end, be more important than any measurable contribution of balanced Western diets to individual nutritional health."21

Conclusion
To answer the earlier posed question, no the public has not been duped. There really are significant benefits to using organic foods over their conventional counterparts. These include health, nutrition and environmental benefits.