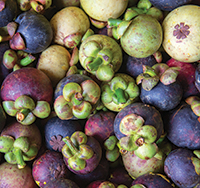 In nutrition, is there evidence for a category of “super” fruit and vegetables? Are there accepted definitions that make “superfruit” more than just a marketing term?

Unfortunately, the answer to both questions is a firm “maybe.” In retrospect from the vantage of late 2014, the “super” in “superfruit” seems to have arisen chiefly from the novelty of a small number of ingredients that have not typically been part of Western diets. Also important was a period of giddy promotion by The Oprah Winfrey Show and The Dr. Oz Show circa 2008. The primary initial objects of the “buzz” and, let’s face it, hype, were probably only a handful of items that included acai berry, acerola, goji berry and pomegranate that were promoted as exhibiting unique health benefits.

By late 2009, the producers of The Oprah Winfrey and Dr. Oz Shows were backpedaling from promotions that were widely presented as endorsements of superfruit greater nutrition and health advantages not shared by ordinary fruit and vegetables. Today the pendulum, after years of enthusiasm and attempts to add ever more exotic fruit and vegetables to the category, has swung back the opposite direction due to consumer fatigue.

Novelty is important to the category. There are some superfruits, such as sea-buckthorn berries, which are widely consumed in Europe and Asia, yet barely known in America. Black currant is another item with tremendous nutritional value that is widely consumed in Europe, but has not taken off here. Given that black currant is equivalent in nutrition to recognized superfruits such as bilberry and cranberry, and far superior to acai berry, its slow launch into this market is a bit of a mystery.

The next interesting developments in super foods at this point likely will not involve actual superfruit, but may encompass vegetables, as well. The “fruit” side of the category has been expanded very far already. Instead, emerging foods such as the extremely anthocyanin-rich black rice (the “forbidden” “longevity” rice) and the new black garlic may be the next wave to capture consumer attention. Asia, the source of many items considered to be superfruit in the US, is not immune to the category, as black garlic and black rice attest. Another super food in parts of Asia, again a vegetable, are “wild” and “mountain” varieties of bitter melon.

Pomegranate, bilberry, blueberry, goji, cranberry and grape will continue to be popular because they have defined niches and histories of use. Moreover, each is backed by considerable science and on-going research. Other current superfruit entries may not continue to be so successful in the marketplace. Acai, despite its current presence, may not endure because there remains little or even no science behind it. In its native Brazil, acai is used for weight gain; in America, it is sold for weight loss. Both of these uses cannot be right and the lack of science already has caught up with many acai products.

Superfruit As A Category
The idea behind this marketing term is that these fruits are exceptionally rich in nutrients, perhaps especially antioxidants. Commonly known fruits seldom have been marketed as superfruits despite the nutrient density of many of them; the key is exoticism and marketing plus, usually, new taste or aroma sensations.

Quality control can represent difficulties. Fruits from exotic locales may be hard to police for continuity in color, taste, nutrient content, and so forth. Fruits sourced from areas that continue to use leaded gasoline can bring special issues for testing and quality control. Moreover, many of the so-called superfruit are the subjects of limited cultivation, which means that suddenly demand can seriously distort availability and pricing.

Superfruit As Antioxidants And The Changing Acceptance Of Orac Testing
One common promotion of superfruit has been for antioxidant capacity, something often measured as ORAC. Oxygen radical absorbance capacity (ORAC) is a method of measuring antioxidant capacities in samples. ORAC includes more than just antioxidant capacity. Testing labs can break out fast- and slow-acting antioxidants, the status of free radical generation in terms of peroxide and hydroxyl radicals, and so forth and so on. At one point in time, it was thought that ORAC values of total antioxidant capacity of supplements would provide good guides to the overall health promoting capacities of these products. However, today it is realized that the role of antioxidants in the body is not so simple. For instance, supposed ORAC measures of the antioxidant value of vitamin E vary widely. Vitamin E has been reported as only slightly inferior to astaxanthin as an antioxidant and also as 550 percent less potent. Moreover, although vitamin E is a great antioxidant, two decades of clinical research has failed to demonstrate unequivocal health benefits. The consensus today is that there is no direct relationship between antioxidant activity per se and health activity.

Matters get worse. Antioxidant claims are made for hundreds of nutrients, but this leads to a marketing paradox. To paraphrase a famous observation, if every supplement is an antioxidant, then being an antioxidant no longer is anything special. ORAC claims today do not carry the marketing punch that they carried a decade ago. ORAC claims may still be useful, but nutrients now need to demonstrate specific benefits. For instance, black currant offers more than just an extremely potent ORAC value — it also offers potent and proven protection for the brain and the eyes from its content of particular anthocyanins, including delphinidin-3-rutinoside and cyanidin- 3-glucoside. Similar protection is found with bilberry. Just presenting a high ORAC value will not confer these protections.

Some Superfruits And Vegetables Of Note

No matter how one looks at American eating habits, it is clear that additional nutrition of the sort supplied by fruits and vegetables should be welcomed. For instance, less than ten percent of American teenagers consume the recommended daily allotment of fruits and vegetables. Here are some of the choices currently available:

Bilberry — Wild blueberry (Vaccinium angustifolium) is a lowgrowing shrubs in the genus Vaccinium (family Ericaceae); it is a rich source of several different anthocyanins, bilberry is famous for supporting night vision and intestinal health as well as neurologic, metabolic and cardiovascular health; a similar fruit in terms of benefits and contents is the maqui berry (Aristotelia chilensis).

Bitter Melon — Also known as bitter gourd (Momordica charantia), this vegetable is widely viewed as providing significant benefits in diabetes and, in its wild and mountain forms, for promoting longevity (see the Total Health website article on this topic).

Cherries — The dark varieties are rich in anthocyanins, with tart cherries (Prunus cerasus) being especially rich in these nutrients; significant anti-inflammatory, especially for joint aches and pains and muscle pain and stress from exercise and overexertion; cardioprotective.

Cranberry — Cranberries (Vaccinium macrocarpon) are best known for supporting urinary health, in particular inhibiting bacteria from attaching to the bladder wall Goji — Goji or wolfberry (Lycium barbarum) has been promoted for a large variety of benefits and conditions, including diabetes, high blood pressure, fever, and age-related eye problems.

Pomegranate — Pomegranate (Punica granatum) is an ancient fruit famous for its healthful properties since ancient times; supports cardiovascular health, prostate health, metabolic health, exercise recovery and many other benefits; is on the coat of arms of many medical organizations stretching back to the high Middle Ages in Europe.

Conclusion
Many or even most of the superfruits and vegetables beginning to make their names in the US have long records of promoting health in other parts of the world. These foods provide concentrated nutrition based on healthful phytochemical components. Some of the superfruits and vegetables, although exotic in origin, can readily be made a part of the daily diet. This, of course, is the best way to approach superfruits, i.e., move them out of the “exotic” category and into a daily use category. Small changes in habits can then be harnessed to provide real health benefits over the long run.