In this age of marketing of new fruits of every stripe—“super,” “exotic,” “rainforest,” etc. — it is easy to overlook the fact the best of the fruits for many purposes may be those long known. Bilberry is a good example. Black currant is another. Also called the cassis berry (Ribes nigrum), black currant offers many benefits similar to those found with bilberry and blueberry. Indeed, the list of benefits is quite impressive and includes brain, digestive and eye health along with positive influences in the areas of asthma and overall lung function, colds and flu, and women’s health.

The black currant is a small shrub standing up to six feet tall. It grows in Europe, European Asia, North America and, as a cultivated crop, is especially well represented in New Zealand. The berry comes in vivid shades of deep red, purple and black. It is quite small, being similar is size to the bilberry, and is similarly nutrient dense. It is particularly high in anthocyanins, which are the purple-black pigments that color the skin of the black currant, giving it its name. Anthocyanins are powerful plant or phyto-antioxidants. In addition to the anthocyanins found primarily in the skin, black currant by way of its seeds is a rich source of both the omega-3 fatty acid alpha-linolenic acid (ALA) and the omega-6 fatty acid gamma-linolenic acid (GLA). The origin of the fruit can have a strong bearing on its nutrient content. New Zealand’s pristine conditions and mineral-rich environment combined with its elevated exposure to ultraviolet light results in black currants that exceed the fruit grown in other areas in terms of anthocyanin content. The protective delphinidin-3-rutinoside constitutes 40 percent of the total anthocyanin content of the New Zealand fruit. Black currant also is a source of proanthocyanidins, compounds more commonly associated with grape seed and pine bark extracts.

Epidemiology studies, including both regional incidence and the analysis of specific risk factors for Alzheimer’s disease, indicate that substantial prevention of the disease in the 50 –70 percent range is a practical possibility for the United States. Brain aging, including conditions such as Alzheimer’s disease, should not be viewed as if it takes place separately from the deterioration of other bodily systems. It long has been established that elevated blood sugar levels, which is to say, diabetes and pre-diabetes, are linked to the rate of various forms of dementia. Glycation, a deleterious form of modification of protein and lipid macromolecules in which a sugar inappropriately binds to the molecules, has been linked to diseases such as diabetes, Alzheimer’s, and Parkinson’s as well as physiological aging more generally. Therefore, controlling weight and preventing blood sugar spikes are candidate courses of action for anyone seriously interested in preventing dementias.

Although we have grown accustomed to blaming cholesterol for almost any condition, cholesterol is linked to Alzheimer’s disease only when certain contributors to oxidative stress are present. Such findings corroborate the hardly novel observation that only twenty percent of Americans eat the recommended five-a-day fruits and vegetables: it is phytonutrients from the diet that typically control free radical-inducing conditions.

This is where black currant enters the picture. Certain areas of the brain, such as the areas that involves the neurotransmitter dopamine, are particularly vulnerable to oxidative damage, in part as a result of the neurotransmitter itself. This damage is significant in the manifestation of Alzheimer’s disease and is associated with reduced dopamine levels. Perhaps surprisingly, dopamine inhibits the formation of amyloidbeta peptide fibrils. Researchers have found anthocyanins are powerful protectors against oxidative stressors, with whole fruit extracts more powerful than single fractions. James Joseph of Tufts has been quoted to the effect that black currant is effective in increasing dopamine levels, which are low in Alzheimer’s patients. Dilip Gosh of HortResearch, New Zealand, has performed related research that suggests the ability of brain cells to control calcium concentrations is central to their ability to recover from dopamine cytotoxicity. Animal experiments suggest that anthocyanins taken orally can deliver their benefits centrally, which is to say, to the brain, to protect memory and motor coordination. The polyphenolics in fruits and vegetables, especially those of berries, have been shown to retard and even reverse age-related decrements in motor and cognitive performance.

Eye Health
For eye health, the black currant may be even more protective than the bilberry. The bilberry has many historical or traditional uses based upon both the dried berries and the leaves. Used as a medicinal herb since the 16th century, modern interest in the bilberry is partly based on the fruit’s use by British pilots during the Second World War. These pilots noticed that their night vision improved when they ate bilberry jam prior to night bombing raids. In the intervening years, scientists discovered that anthocyanosides, the bioflavonoid complex in bilberries, black currant and a number of other berries, are potent antioxidants.

Anthocyanosides, i.e., anthocyanins (the name changes based on whether a sugar molecule is attached), provide three primary benefits to the eyes. First, these highly colored plant pigments nourish the retina. Night vision depends on the retina’s ability to constantly regenerate visual purple (rhodopsin), and anthocyanins serve as “building blocks” for this important substance. Tests have confirmed these benefits. When subjects with normal vision supplemented with either black currant or bilberry extract, it was found the acuity of their nighttime vision improved, as did the speed at which they adjusted to darkness and the rate at which they recovered from blinding glare. However, it is important to bear in mind that positive results in trials required the ingestion of 50 mg or more per day of anthocyanins. A prudent level of intake would be on the order of 90 or 100 mg of the anthocyanins per day.

Another area of benefit involves the inducement of short distance vision and/or its aggravation or exacerbation if already present. Continual close range visual tasking, such as extended viewing of computer screens, leads to the development of tension of the ciliary smooth muscle, which impairs the eye’s refractory adjustment function. One result is axial length elongation, an aspect of myopia or “nearsightedness.” Bilberry extracts may help counter axial length elongation and at least one in vivo test provides evidence black currant is superior to bilberry in this regard. Related to ciliary smooth muscle tension is visual fatigue. As most computer users know well, the fatigue of the eyes can extend to the neck, head, arms, shoulders and lower back. Anthocyanin ingestion may be helpful.

Several types of deterioration that are typical of aging eyes, such as cataracts and macular degeneration, appear to be influenced by the rate of generation of free radicals. In laboratory trials, changing the diets from commercial laboratory chow to “well-defined” diets rich in flavonoids has shown to be beneficial. Interesting results have been found with human trials in which anthocyanins were supplemented, either alone or in combination with vitamin E.

Digestive Health
One of the more unexpected benefits of black currant extract is in the area of digestive health. When researchers at Massey University of New Zealand used an animal model to examine the impact of supplementation of the diet with inulin, 30 percent anthocyanin extract concentrate (BCE) or cassis infused dried fruit (IDF), they found significant results. Desirable bacteria, in this test meaning Bifidobacteria and Lactobacilli, were increased and unwanted gut inhabitants, meaning Bacteriodes and Clostridia, were reduced. Other research has shown black currant may support gastrointestinal health by reducing the activity of â-glucuronidase and increasing that of â-glucosidase. 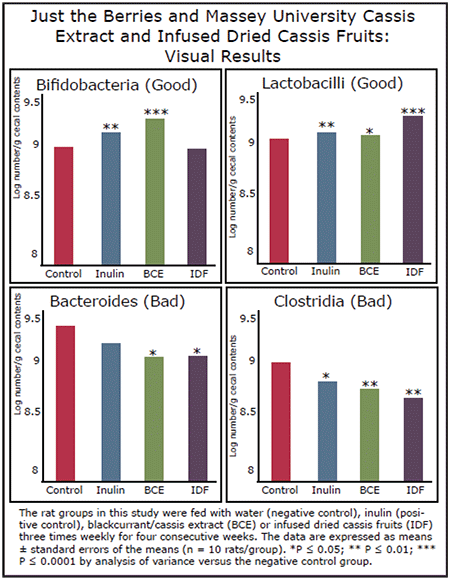 Colds and Flu
Elderberry has been used in folk medicine for centuries to treat influenza, colds and sinusitis, and has been reported to have antiviral activity against influenza and herpes simplex. Many people are familiar with these uses. However, relatively few individuals are aware of the fact many anthocyanins are active against viruses. Researchers at the Department of Microbiology, Asahikawa Medical College in Japan looked at the effects of black currant against influenza virus types A and B in vitro. According to the study results, both IVA and IVB were inactivated up to 99.9 percent by 10 ìg/ml of the black currant extract at pH 2.8, and 95 to 98 percent by this concentration at pH 7.2. The growth of IVA in cells treated with 10 and 100 ìg/ ml of the extract after infection was completely suppressed in six hours. The results indicated that the extract was effective under test conditions in inhibiting the release of the virus from infected cells.

Women’s Health
Every part of the black currant berry can be used, not just the anthocyanidins and proanthocyanidins found chiefly in the skin. The seed oil is a source of both the omega-3 fatty acid alpha-linolenic acid (ALA) and the omega-6 fatty acid gammalinolenic acid (GLA). GLA is recognized as one of the “good” essential fatty acids used to enhance cell membrane fluidity and function. Although the body can manufacture GLA from dietary linoleic acid, it can be more efficiently utilized for body functions when supplied directly by dietary sources. GLA supports a balanced inflammatory response and has been shown to be important for lung, joint, and eye health. According to authorities such as Andrew Weil, MD, the combination of essential fatty acids found in black currant seeds may influence the production of prostaglandins and assist hormone production to support women during menopause.

Conclusions
Black currant has earned its place in the ranks of the “super” fruits. Its range of benefits is similar to that found with bilberry and far better documented than those often asserted rather than demonstrated for acai and other recently promoted fruits. For the health of the brain and eyes, black currant is a winner. It supports normal immune and inflammatory functions. Starting at an intake as low as 50 mg per day of the concentrated anthocyanins, it is compact health insurance against a world of health challenges.