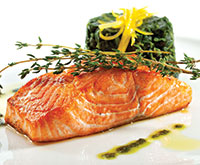 A recent study in the Journal of the American Medical Association found eating a low-protein diet makes your body more likely to store fat around your liver, kidneys, and other organs. You might not think any type of body fat could be good, but trust me: fat hanging around these organs is especially bad. On the other hand, researchers here found a higher-protein diet increases muscle and boosts your metabolism.

The study recorded everything 25 people ate over 12 weeks. And I mean everything: these people were confined to a hospital ward and closely monitored. None of them were smuggling in Little Debbies or anything else not on the well-regulated menu. Researchers gave these participants about a thousand extra calories every day. One group got those extra calories as protein, the other from carbs.

Not surprisingly, both groups gained weight…

Now, imagine you didn’t eat those extra thousand calories like participants did in this study. The reality is, eating the right amount of carbs or protein can help you lose weight. But you don’t want to lose weight. You want to lose fat and gain muscle.

No contest: you want to eat a higher protein diet.

But this study also reveals something more profound, which cutting-edge nutritionists like myself have argued for decades:

A calorie is not a calorie.

Let’s take a look at two different dinner scenarios with the same amount of calories:

Both meals have the same amount of calories. But they have completely different effects in your body.

I could trot out dozens of studies that prove protein is far superior to carbs to curb appetite, build muscle, spike metabolism, and burn fat.

A study in The American Journal of Nutrition, for instance, concluded a high-protein breakfast keeps you fuller longer than whatever low-fat/high-carb concoction passes as breakfast food these days.

And a study in The New England Journal of Medicine that looked at 1,209 adults over six months concluded a protein-rich diet helps you burn fat and maintain fat loss much more effectively than carbohydrates. You get it. Protein is that important. It burns fat and aids in about a zillion other things in your body, from building hormones and antibodies to preventing muscle breakdown.

Want to lose weight? You could choose any number of diets, from lowering calories to eating a high-carb, lower-fat diet. But want to lose fat? No contest: higher-protein, reduced-carb eating is your most effective fat burning, muscle-building option.