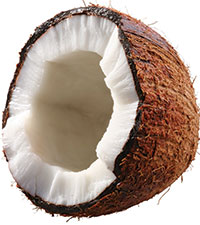 In mid-2012, Nestlé Health Science acquired a stake in Accera®, the U.S. maker of Axona®, a medical food targeted at people with mild to moderate Alzheimer’s. Aside from the fact that the purchase shows that Nestlé is placing a strategic bet on the future direction of medical food demand, this acquisition also is interesting for its potential validation of a tropical oil that alternately has been damned and praised for its role in health: coconut oil.

On the one hand, there are those who still maintain that coconut oil, a source of more saturated fat than butter, lard or beef tallow, is the devil incarnate for brain and heart health. On the other hand, current science is in the process of validating the high regard that the coconut oil enjoys in the Ayurvedic and Chinese traditions of healing.

Indeed, coconut oil bears a striking overlap in its metabolic implications, in this case for Alzheimer’s disease, with medical foods designed to provide the brain alternate fuel sources. A nice introduction to this topic is Alzheimer’s Disease: What If There Was a Cure? by Mary Newport, MD.

The scientific backtracking regarding coconut oil recently was put in a nutshell in a New York Times interview of Thomas Brenna, a professor of nutritional sciences at Cornell University.1 Dr. Brenna observed that coconut oil’s bad reputation for cardiovascular health rested mostly on partially hydrogenated coconut oil, oil designed specifically to raise cholesterol levels in the rabbits being used in experiments. Virgin coconut oil differs dramatically in a large number of ways from the trans-fat laden partially hydrogenated item. Even the health dangers of the saturated aspect of coconut oil currently are being debated. As Dr. Brenna remarks in the interview, “I think we in the nutrition field are beginning to say that saturated fats are not so bad, and the evidence that said they were is not so strong.”

Coconut Oil—A “Good” Saturated Fat
Coconut oil is saturated (it is solid up to 76° F), consisting of 86.5 percent saturated fatty acids and 5.8 percent monounsaturated fatty acids.2 Lauric acid makes up approximately 46 percent of coconut oil and generally is considered to be the villain in terms of serum cholesterol. However, in clinical trials, the effects of dietary supplementation with coconut oil usually have been found to be either no effect or a small increase in LDL cholesterol and a significant increase in HDL cholesterol, meaning that the ratio—and cardiovascular risk—improves with supplementation.3,4

Moreover, extra virgin coconut oil consists mostly of medium-chain fatty acids (MCFA), with 50 percent being lauric acid. Medium-chain fatty acids have been used for many years for special health purposes. They have attracted attention as part of a healthful diet because they are absorbed and transported directly into the liver via the portal vein and thereafter metabolized rapidly by beta-oxidation, thus increasing diet-induced thermogenesis.5

One derivative of coconut MCFA is medium-chain triglyceride (MCT) oil, which is 75 percent caprylic and 25 percent capric acids, fatty acids very similar to lauric acid and present in virgin coconut oil in smaller amounts. MCT oil often is found in the hospital nutrient mixtures for bedridden patients who are dependent upon intravenous nutrition. These fats were developed in part because they do not require the action of bile for digestion, but rather are absorbed directly through the walls of the small intestine and transported to the liver to be used immediately as fuel.

The special characteristics of coconut MCFA mean that the body prefers to burn it for fuel rather than to store it. You might say that the body treats coconut fatty acids more like it does carbohydrates, but without getting involved with insulin. Scientists know this because of experience with MCT oils. In my book Anti-Fat Nutrients (revised 4th edition, Basic Media), I discuss MCT oil at length. In seriously catabolic patients, MCT oil was found to help prevent the body from depleting lean and muscle tissues. Again, MCT fatty acids are not readily stored as body fat, but rather they are preferentially burned in the mitochondria of the cells to provide energy.6 For some athletes and bodybuilders, this quality has proved useful since excess training depletes the glycogen stores of the muscles, and continued training after that point can only take place partially through the break down of muscle protein for fuel.7 Coconut oil medium-chain fatty acids have properties similar to those of MCT oil, but not as pronounced.

Does this mean that coconut oil can help dieters? Yes, as long as there are not too many expectations. Indeed, the nutrition author Ray Peat, PhD, has remarked that in the 1940s farmers attempted to use coconut oil for fattening their animals, but they found that it made them lean, active and hungry instead! The fatty acids found in coconut seem to promote the burning of fat for fuel and, as already noted, have a pronounced thermogenic effect. However, the thermogenic and fat-burning qualities of medium-chain fatty acids seem to be more significant for healthy subjects of normal weight and for those moderately overweight than for those who are clinically obese (fortunately, a category that excludes most of us). Moreover, medium-chain fatty acids serve to protect the body’s protein in the lean tissues during the use of low calorie and low carbohydrate diets.8

Immune and Digestive Benefits
Coconut oil has many other benefits. Two names are closely associated with the research in this area. These are Jon J. Kabara, PhD, one of the primary researchers into the benefits of lauric acid, and Mary G. Enig, PhD, the great researcher in the area of fats and one of the first (literally decades before the mainstream medical researchers) to point out the health dangers of trans-fatty acids.

Dr. Enig was the keynote speaker in 2001 at the 36th Annual Conference of the Asian Pacific Coconut Community. There she gave her talk on the benefits of the coconut as a functional food. She noted that approximately 50 percent of the fatty acids in coconut fat are lauric acid, which has the additional beneficial function of being formed into monolaurin in the human body. Monolaurin is a monoglyceride used by the human metabolism to destroy lipid-coated (that is, fat-coated) viruses and a number of other undesirable organisms.

Approximately 6–7 percent of the fatty acids in coconut fat are capric acid. Dr. Enig points out that capric acid is another medium-chain fatty acid that has a similar beneficial function when it is formed into monocaprin in the human or animal body. Monocaprin has beneficial effects similar to those found with monolaurin.

The work of Dr. Jon Kabara and others shows that coconut oil components exert their health benefits in a way that is very safe to humans. In general, it is reported that the fatty acids and monoglycerides produce their inactivating effects by destabilizing the membrane that surrounds pathogens, for instance, by causing the disintegration of the virus envelope. Despite such sometimes quite potent actions against unwanted microbes, there is no evidence of any negative effect on probiotic organisms in the gastrointestinal tract.

In his accessible, yet thoroughly researched book, The Healing Miracles of Coconut Oil (HealthWise), author Bruce Fife, ND, ranges across a number of health topics for which coconut oils has proven to be effective. He notes that coconut oil is so stable that it helps to preserve other oils, thereby reducing antioxidant requirements. Populations that eat large amounts of coconut and coconut products, such as the oil, are characterized by low rates of heart disease. Lauric acid and other medium-chain fatty acids are found in mother’s milk, where among other things, they improve the uptake by the baby of nutrients such as amino acids, calcium and magnesium. Similar effects upon nutrient assimilation have been found in the very ill and in the elderly. Moreover, these health benefits do not even take into account the long accepted uses of coconut oil to nourish the skin and the hair.

Benefits for Brain Health?
Let’s return to Nestlé Health Science acquired a stake in Accera, the U.S. maker of Axona, a medical food targeted at people with mild to moderate Alzheimer’s. The basic argument for this medicinal food is that in Alzheimer’s disease, the brain is starved for energy because it has a reduced ability to metabolize glucose. Reduced energy means reduced levels of cognition and memory. Fortunately, there is an alternative to glucose known as ketone bodies. Axona is a proprietary formulation of caprylic triglyceride that is converted by the liver into ketone bodies.

Recall that coconut oil is a good source of medium-chain triglycerides (MCTs), the fatty acids that are converted in the liver to ketones. Ketones can provide energy to cells without the need for insulin. This is important for several reasons, not the least being that Alzheimer’s is related to insulin resistance and the attempt to get glucose to the brain with a high carbohydrate diet is counterproductive.9 Moreover, access to ketones may more generally promote neurologic health—several neurologic conditions have shown promising results with ketogenic diets. Ketogenic diets may help treat difficult cases of epilepsy and Parkinson’s disease as well as other neurological disorders, indeed perhaps improve cognition and health in general.

The use of coconut oil with the conditions above at this point is promising, but hardly proven. Moreover, there are not yet much in the way of set rules or recommendations. Dr. Newport was giving her husband as much as 11 tablespoonsful per day, with four to eight tablespoonsful seeming to be a regular recommendation. At 115 calories per tablespoon, a coconut oil supplemented diet should not otherwise continue to be the standard American diet built upon a foundation of refined carbohydrates. Those wanting to add serious amounts of coconut oil to their everyday diets, as opposed to merely switching to it as a cooking oil, might find it useful to explore high protein/low carbohydrate options more generally. The chief warning to those who would try such diets is that Paleolithic-type diets need to include plenty of vegetables and reasonable amounts of whole fruit (avoiding fruit juice).

Summing Up
In his book, Bruce Fife asks the rhetorical questions, “If there was [sic] an oil you could use for your daily cooking needs that helped protect you from heart disease...other degenerative conditions, improved your digestion, strengthened your immune system, protected you from infectious diseases, and helped you lose excess weight, would you be interested?” Surely this is a good question. Aside from the record of traditional use, numerous research papers and United States Patents argue for the health-promoting benefits of coconut oil. Now that organic coconut oil/extra virgin coconut oil is readily available in health food stores, perhaps it is time for health-conscious shoppers to give it a try.