My patients and entire test kitchen crew (male and female) love this easy, tasty and oh so filling one-dish meal—we often serve it with salad, fruit or slices of avocado to complete the course.

Although quiche is considered a classically French dish, it actually originated in Germany. It started in the medieval kingdom of Lothringian, under German rule, which the French later renamed Lorraine (sound familiar?). The word 'quiche' is from the German word 'kuchen,' meaning cake or cake-like dish. Quiche Lorraine (named after Lorraine region of France) is a popular variant that was originally an open pie with eggs, cream and lardons (strip of bacon).

Quiche is essentially custard made with milk and eggs poured into a pie crust and baked. You want just enough eggs to set the milk, but not so many that the quiche becomes rubbery.

Quiche has a crust, but it doesn't have to; this one doesn't. Frittatas have no crust and little, if any, milk or cream. Frittatas are cooked first on the stovetop and then finished in the oven or broiler. The word frittata is Italian for "fried."

What's a Strata?
Strata's are eggs, cheese, milk, and bread casserole that puff-up when baking.anything goes that you would put into a quiche or frittata.

This easy crust-less zucchini spinach quiche only takes 10 minutes of prep time and about 45 minutes to cook. It won't spike your blood sugar, feed candida or "ignite" inflammation! 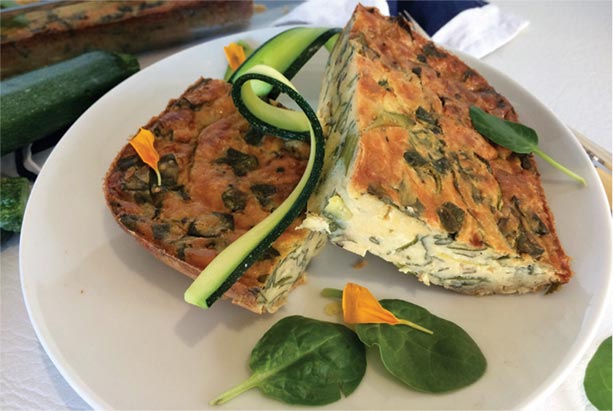 Preheat oven to 350°F and grease a 9.5-inch pie plate. Best to squeeze excess moisture from grated zucchini before using.

Combine all ingredients in a large bowl, reserving some parmesan for the top, pour into a prepared pie plate or oven-proof casserole. Top with Parmesan or a combination of Parmesan and Gruyere.

Bake at 350°F for 45–60 minutes or until fully set. Remove from oven, slightly cool on a rack, garnish with greens.

*Many people are not familiar with Gruyère cheese, it’s one of my favorites especially when you need a cheese that easily melts yet doesn’t get rubbery. This nutty, melty, Swiss Cheese variety is GREAT for making fondue as well. It was named for the town of Gruyères in Switzerland where it was originally made; Gruyère cheese is a firm cheese with a pale-yellow color and a rich, creamy, slightly nutty taste.