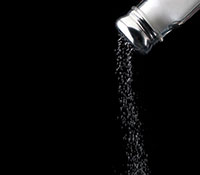 I’m being sarcastic, right? The official health wisdom — the wisdom everybody knows is right (because all the top health officials repeat it over and over again) — is that if you “restrict” the salt in your diet, you’ll live longer.

That’s because (once again, according to those official pronouncements) your blood pressure will be lower, putting you at less risk for a heart attack or stroke, the #1 and #3 causes of death in the U.S.

There’s only one problem with that widespread “health wisdom,” as I’ve been telling my patients and readers for many years. It’s not true! And a recent article in the May 4, 2011 issue of the Journal of the American Medical Association is the latest evidence to run counter to the medical (and mistaken) myth of “Low Salt Good, High Salt Bad.”

Low-Salt Diet = 4X Death Rate From Heart Disease
The study was conducted by researchers at the University of Leuven in Belgium. First, they measured the urinary sodium levels of 3,681 healthy people in their 40s. Then they tracked their health for the next eight years. The folks with the highest urinary sodium levels — a sign of a higher dietary intake of salt — had the lowest risk of developing heart disease. Looked at another way, the low-sodium folks had four times the rate of dying from heart disease, compared to the high-salt folks.

The conclusion of the researchers was straightforward: “Our current findings refute the estimates of lives saved and health care costs reduced with lower salt intake. They do not support the current recommendations of a generalized and indiscriminate reduction of salt intake.”

The recommendations they’re talking about are those from the American Heart Association (AHA), which suggests you limit your intake of salt to 1,500 milligrams (mg) per day — way down from the 4,000 or so mg most of us eat every day.

What did the study researchers have to say about the lowsalt pronouncements of U.S. heart honchos? Yes, they agree, salt restriction may be a good idea if you already have high blood pressure or congestive heart failure. But for the rest of us? Previous scientific research has overestimated the effect of salt intake on healthy people, they say. And, they point out; hardly anyone actually achieves the level of salt restriction suggested by the AHA — a sign that the salt-needing body naturally triggers you to eat more salt when you try to cut back.

Of course, this isn’t the first study to report that salt isn’t bad for you. (And, in fact, it’s good for you.) Many other studies say the same thing.