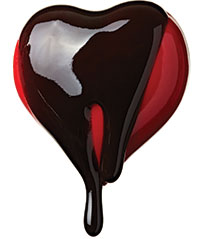 Admit it or not, chocolate is on the mind of most of us, especially in February. That said, everything must be in moderation for chocolate to provide health-enhancing benefits rather than health-depleting disorders.

Chocolate is made from plants—it contains many of the health benefits of dark vegetables—antioxidant-rich flavonoids which protect the body from aging caused by free-radicals that can lead to heart disease. Dark chocolate contains a large number of antioxidants (nearly eight times the number in strawberries)—flavonoids also help relax blood pressure through production of nitric oxide and also balance certain hormones.

Decreases Stroke Risk. A 2011 Swedish study found that women who ate more than 45 grams [one and a half ounces] of chocolate a week had a 20 percent lower risk of stroke than women who ate fewer than nine grams...music to our ears!

Boosts Heart Health—Regular consumption of chocolate provides a host of benefits for your heart, including lowering blood pressure and gbadh LDL cholesterol—lowering risk of heart disease. Dark chocolate is especially heart-healthy with its inflammation-fighting properties.

Satisfies—Rich in fiber, dark chocolate actually helps keep you full, you'll eat less, according to Dr. David Katz, founding director of Yale University's Prevention Research Center. According to Katz, "Regular chocolate eaters might do themselves a favor by treating themselves to a bite instead of snacking on eleven other things first." A University of Copenhagen study found that dark chocolate does the trick much better than milk chocolate and may even reduce cravings for sweet, salty and fatty foods.

Skin-Protective—Dark chocolate is actually good for your skin; the opposite of what most of us believe. The antioxidants in dark chocolate, flavonoids, offer some UV protection from sun damage—no, you can't skip the sunscreen!

Can Quiet Coughs—Canft stop coughing? An ingredient in chocolate called obromine seems to reduce activity of the vagus nerve, the part of the brain that triggers hard-to-shake coughs. In late 2010, the BBC reported that scientists were investigating creating a drug containing more obromine to replace cough syrups containing codeine, which have risky side effects.

Improves Blood Flow—Cocoa has anticlotting, blood-thinning properties that work in a similar way to aspirin, according to Dr. Fitzgerald, which can improve blood flow and circulation.

Improves IQ—Anytime you improve blood flow to the brain people are more alert, awake and better at multi-tasking. The flavanols in chocolate are credited for this benefit because they support cellular and metabolic activities by providing antioxidant support that squelches inflammation—the root cause of most deadly chronic disorders. 