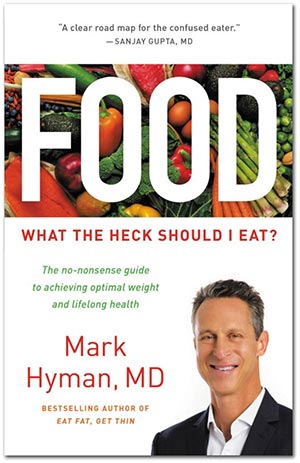 Bacon and eggs are healthy and oatmeal is not. That's just one revelation from cardiologist Dr. Mark Hyman's new bestseller, "FOOD What The Heck Should I Eat." It typifies the book's thesis and its attacks on conventional wisdom surrounding modern day Western society's search for the best diet. By best I mean healthy and least likely to cause heart disease, obesity, diabetes, inflammatory bowel disease, arthritis, autoimmune illnesses, and cancer. And by best I do not mean the tastiest or easiest to follow.

But first, as a recently retired cardiologist, I, and most of my colleagues owe the general public a huge apology. The diet theory of heart disease, i.e. fat and cholesterol in our diet inevitably contributes to cardiovascular disease, was wrong. This much Dr. Hyman and I agree upon. Flawed research and assumptions lead us down a rabbit hole for decades making patients, and ourselves, afraid to eat anything that to be frank, tasted good. The low fat, high carbohydrate diet espoused for decades by the heart associations and government nutritional boards was wrong. It produced more obesity and diabetes and probably not greater heart health. It created anxiety, fear, angst, and guilt in Americans as we de-selected any foods that were high in fat or cholesterol, in favor of largely unhealthy amounts of carbohydrates.

I freely admit that I have a carb addiction. For me a slice of crusty bread or a hot soft pretzel stimulates the part of my brain that could lead to opiate addiction. So the subject of diet and heart disease is personal. My now deceased father was an internist when in the 1960's the diet theory of cholesterol was first promulgated. I remember him telling me eggs were poison. He ate fish or chicken every night. Although he did eventually succumb to coronary artery disease and bypass graft surgery, it was cancer that killed him.

So if all of the experts were so wrong for so long, is it any surprise that we still are in search of the best diet for longevity and good health; or that we distrust mainstream nutritional authorities? If you want to know how desperate we are to find the answer, just Google the word "diet" and you will get over 210,000,000 hits.

Throughout the course of "FOOD," Dr. Hyman likes to tell us what the "experts" got right and what they got wrong. His book is well written with many footnotes. However, some references are suspect for being less than authoritative, let alone based upon good science. Here is what I think the author got right and wrong.

Yes the diet theory of cholesterol was wrong. Refined carbohydrates (think white—like white bread, white rice, etc) are converted into sugar by the body. The body then stores excess sugars as fat. So unless you are burning off 4,000 calories a day with intense exercise, you will gain weight with a diet rich in carbs even if you watch how much sugar you eat. Dr. Hyman is also correct in assigning blame to big food companies who disguise and include sugar in everything we buy, from ketchup to salad dressings.

He cites the PURE study that found there was, "...no link between total fat and saturated fat and heart disease." However, to quote the Harvard School of Public Health, "PURE study makes headlines, but the conclusions are misleading." The jury is still out on this. I also question his enthusiasm for coconut fats and oil. They are extremely high in saturated fats. Dr. Hyman and the PURE study notwithstanding, I think the science behind coconuts and heart disease is far from settled. If you look at countries that consume lots of coconuts, like Guyana and Malaysia, heart disease incidences are quite high. Dr. Hyman states, "...cultures with more than 60 percent of their diet as coconut oil have no heart disease..." is wrong. For me coconut oil is not a health food. He defends saturated fats by noting, "Breast milk is 24 percent saturated fat—higher than the six percent the AHA recommends." Infants need lots of fat. Adults, not as much. To infer otherwise is bad science.

Dr. Hyman applauds, or at least approves of, governmental regulations and taxes on sugar-laden sodas. However when it comes to consuming raw unpasteurized milk, which has killed and made people ill, his response is, "In the end, this fight is as much about the freedom to choose the foods we want..." He criticizes BPA containing tin cans, but doesn't explain how to buy ones that are not. It's not that easy. Trust me, I have tried. He takes issue with lobster since it has moderate amounts of mercury, yet it has less than 10 percent of the heavy metal in swordfish and is in the middle zone of fish and shellfish when examined for mercury content.

He urges caution about eating "nightshades" (potatoes, peppers, tomatoes, and eggplant), as "some people react badly to them." Yet, these are important and integral parts of a proven healthy Mediterranean diet. He goes further and says they have "negative effects..." that "...include pain, inflammation, and arthritis." Yet again in the southern Mediterranean nations, where lots of these are consumed, there is no greater incidence of arthritis or inflammatory bowel disease than the rest of the world.

Not even beans and legumes are safe from his bad food list and he states that most of us should have no more than 1/2 cup per week. He gives hints about how to make food healthier that may in fact be true—like chopping up garlic and letting it sit for forty minutes before using it. Or letting rice cool and then reheat it to alter the resistant starch content. But one has to question how practical this is in a nation where we cook at home less, and eat out more, than we ever did before.

Some of his suggestions are easy, like steaming vegetables for only four minutes rather than letting them soak away in boiling water. His advice about buying organic is well meaning but with umpteen families struggling to pay food bills, how many realistically can afford a 10-20 percent surcharge on their food budget for this? In fact, there is little data to show that "covered" fruits, such as bananas or avocados, are healthier when buying the organic version.

One of his more extreme contentions is, "Thanks to soda, now even kids have fatty livers and need liver transplants." I can't disagree with the first part, but as to needing liver transplants, I am not sold on this. I question how many and where is the reference for this. He cites none.

He contends that the American Heart Association gets funding from cereal makers and therefore is not objective when assessing heart-healthy food sources. This may be true. However in citing Kevin Michael Geary's article on Medium.com, "Is the American Heart Association a Terrorist Organization?" his only apology is, "The title is a bit inflammatory, but the content is accurate." This web site is an open blogging platform.

He of course does not believe that we should be eating gluten. He implies that whether we have Celiac disease or not, gluten is bad and our bodies react poorly to it. This is not new information and his inference that "Celiac is a root cause of... everything from cancer to dementia and autism" is without good documentation. But this isn't even the most absurd statement he offers about gluten or wheat. He states, "...because (of) our environment, habits, and medications—(there has been) a rise in Cesarean sections..." The only "habit" that has created a rise in C-sections is our habit of suing doctors. The rise in C-section rates correlated exactly with the rise in malpractice suits against OB doctors delivering less than perfect babies via the vaginal route. It has zero to do with our diet.

For just a moment let's forget the science here. His "Pegan" diet, (part Paleo and part Vegan) is just not easy to maintain. And even if you can succeed with it at home, just try following his advice when you eat out, travel, or go to a friend's home for dinner.

He begins the book with a story of visiting a poor South Carolina family and spending time with them demonstrating how to shop and cook healthy. One wonders how well that family has been able to adhere to his advice long after he has gone. There is much to admire in this work, and his attacks on many of our long-held dietary beliefs and nutritional dogma are well deserved. But in the end this may be just another in a long line of tomes dealing with our bipolar love and fear relationship to eating and food. I wonder if it will survive the test of time.

Dr. David Mokotoff is a retired MD-Cardiologist with a passion for writing. He has authored many scientific as well as medical interest articles. His publications include "Remembering Earl" in The Journal of the American Medical Association (JAMA), "Why I'm Leaving Private Practice" in Physicians Practice Magazine, "Why I Brought Spirituality to My Medical Practice" in Integrative Medicine: A Clinician's Journal, and "Never Too Late to Fall in Love" in Florida Sportsman. He has been interviewed many times in local Tampa and St. Petersburg newspapers and on television and radio. He has authored a memoir and most recently "Dark and Light: A Short Story Collection." He may be contacted via twitter @DavidMokotoff, his website, www.drdavidmokotoff.com, or email davidmmokotoff@gmail.com.