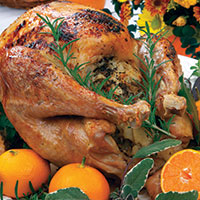 Okay, so you're wondering what in the heck is Dr. Gloria going to dissect now in her Health Detective investigative work? Well, it’s about helping you to choose healthy choices during the holidays rather than health-depleting ones. I’m going to provide you with gluten-free, nightshade-free, dairy-free alternatives to make those holiday meals just as tasty as the traditional unhealthy, high fat ones.

Here it goes…quick and easy…

(Healthy Alternative)
Gluten-free bread—toasted and cut into small pieces, coconut oil or olive oil instead of butter, fresh chopped herbs (the same as used in the basting formula provided above), all natural (no nitrates or additives) pork sausage browned in onions and garlic, an abundance of fresh chopped garlic and onions, dried cranberries (no sulfites), chopped fresh parsley, chopped pecans or walnuts, all natural chicken broth to moisten entire stuffing mixture, two strips of peppercorn thick sliced bacon (fried until crispy and then crumbled and added to mixture.

Mashed Potatoes (Traditional)
Any variety of potatoes cooked and mashed with added butter and/or milk or cream.

(Healthy Alternative)
Peel and cube yams and mix or layer in a baking dish with: coconut butter, plenty of ground cinnamon, 1–2 whole cloves or a sprinkle of ground cloves, natural sweetener like that made from LoHan. Bake at 350 degrees until soft with a light brown crust.

(Healthy Alternative)
Take turkey drippings and freeze until fat rises to the top. Skim off fat and use remainder for the gravy base. Dissolve either white rice flour or arrowroot in organic non-fat milk or milk alternative like Flax milk and dissolve all lumps.

Place gravy base in skillet until bubbling, add cold liquid with dissolved flour quickly and continue to stir to avoid lumps. Slowly boil until thick. If not thick enough repeat flour in milk and add more to mixture but make sure it’s cold when you add to hot mixture. Then add about 2 TB of Bragg’s Aminos (tastes just like soy sauce)—gives the gravy a wonderful rich taste as well as the salt so don’t salt until after you’ve added and taste. Season with salt and pepper to taste. This is simply meant to be a sampling of alternatives and, hopefully, serves to "plant the seed" of inspiration to create healthier meals anytime.