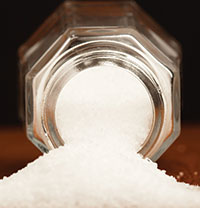 If you answered iodine, you’re correct. Before the widespread use of synthetic drugs, iodine was practically a universal medicine for everything, even in assisting the body to fight off cancer. Today, we find ourselves with skyrocketing cancer rates, an epidemic of thyroid dysfunction and auto-immune disorders, and toxic build-up in our bodies—could an iodine deficiency be to blame? I believe it is!

Iodine was discovered in 1811, isolated from the soda ash of seaweed, by the French scientist Courtors and used as a medical tincture in the Civil War. By 1874, it was found to be one of the most efficacious antiseptics, due in part to its low reactivity to proteins—allowing its I2 molecules to rapidly and thoroughly penetrate the cell wall of microorganisms.

Credit of its discovery also goes to an East Indian, Sunker Bisey, who ushered iodine into the Medical Hall of Fame. Iodine is one of the four elements in the body that also include water, salt and soda—the basic elements and from these all the rest are made in one form or another.

Iodine is a “trace element”— modern science and medicine consider it to be essential for healthy maintenance of life. The single most important use of iodine, in animal and human biology, is for the formation of two hormones in the thyroid gland (actually an endocrine gland). The hormones are thyroxine (called T4) and triiodothyronine (called T3). T4 and T3 contain four and three atoms of iodine per molecule of hormone respectively.

The thyroid gland absorbs iodide from the blood to form these hormones from the amino acid tyrosine. They are then stored prior to being released into the bloodstream in an iodine-containing protein called thyroglobulin. The production and release of hormones T3 and T4 by the thyroid gland are regulated by another hormone called thyroid-stimulating hormone (TSH)—produced by the pituitary gland located in your head.

Both T4 and T3 hormones perform several important functions including the regulation of the body’s basal metabolic rate (BMR), which determines the amount of energy the body uses simply to function. Therefore, insufficient or excess quantities of these hormones can lead to weight-related as well as many other chronic health disorders.

These days, most of the iodine we get in our diets is from table salt. Iodine was actually added to salt to reduce incidence of goiter (enlarged thyroid gland) in the 1920s. And that worked for a while. Currently people are cutting back on table salt for other health reasons so they aren’t getting much, if any, iodine. What little they do consume may not work effectively, either, even when it’s natural sea salt. Iodine depletion has occurred because other minerals like chlorine, fluoride, and bromide, which lower iodine levels in the body by blocking iodine receptors, are increasingly consumed through foods and environmental exposure. Chlorine is now used to purify water instead of iodine. Fluoride, almost universally found in toothpaste and drinking water, blocks the ability of the thyroid gland to concentrate iodine. Bromines, which began replacing iodine in commercial baked goods over 30 years ago, can cause depression, headaches, and even hallucinations.

Luckily, not everyone has forgotten what this amazing mineral does for our health. Integrative medical practitioners are bringing iodine back in their clinical protocols. And researchers suggest that boosting iodine consumption improves thyroid health, lowers incidence of breast and fibrocystic disease, prostate dysfunction and promotes overall well-being. The current minimum daily requirement is 150 micrograms (mcg). Typically, we in the United States consume 240 mcg per day— just enough to prevent goiter, but not enough for other truly beneficial health effects. In my practice we do an easy patch test that’s been done for centuries to determine if the current amount of iodine is sufficient in the body…remember… what goes ON the skin goes IN the body so this test is extremely accurate as a guide for natural supplementation. I use approximately 12,000 to 10,000 mcgs daily in a homeopathic blend when hypothyroid is indicated. My book, “Your Thyroid” that explains the home testing method as well as suggested amounts for supplementation depending on your results.*

Basically, when the thyroid gland doesn’t receive the “fuel” that it needs to function, a thyroid deficiency called hypothyroid develops. The World Health Organization (WHO) estimates over 2 billion people are iodine deficient—with up to 50 million experiencing serious symptoms of imbalance that go undiagnosed and untreated.

Iodine is especially vital for pregnant women, their unborn babies and young babies as a deficiency can lead to severe developmental issues. Recently, iodine deficiency has been linked to autism in children.

When you consider that industrial farming methods, lack of minerals in the soil, and environmental pollutants have all robbed the soil of natural mineral resources, it translates into poor iodine-content in foods and equates to health disorders that have their roots in iodine deficiency.

THE FOLLOWING ARE THE MOST COMMON DISORDERS/ DISEASES KNOWN TO INCLUDE IODINE DEFICIENCY:

By comparison, people in Japan consume more than 12 mg (12,000 mcg) of iodine per day, 50 times more than the average American. Life expectancy in Japan is just over 82 years old—in the United States it's about 78 years and infant mortality there is half of that of the United States. And...American deaths from breast cancer are three times the number in Japan.

Beyond thyroid support, iodine's anti-cancer functions may be among its most important benefits. Scientific tests exposing estrogen-sensitive breast cancer cells to iodine show the cells are less likely to grow and spread. Fibrocystic breast disease is a common condition involving swelling, tenderness, and discomfort of the breasts. In one study, 98 percent of women receiving iodine treatment were pain-free by the study's end, and 72 percent had improvements in breast tissue.

Iodine is available in various forms, each of which affects specific tissues in the body. If thyroid issues are your concern, potassium iodide is best absorbed by the thyroid. Breast tissue uses iodine most efficiently in the form of molecular iodine. Consider a supplement that includes more than one form like that found in a homeopathic blend. The most effective formula I've used and recommended is a homeopathic proprietary blend called Wholistic Thyroid Balance.** If you're extra-sensitive to cold, put on weight easily, have dry skin, or feel "foggy", you may be deficient in iodine. Other easy-to-recognize signs include a thinning of the outer third of the eyebrows, stiff joints, and dull, lusterless hair. If these sound like common symptoms, it's no surprise—most people don't get the iodine they need! 

* "Your Thyroid" available in eBook and paper version both $9.95 at www.gloriagilbere.com