Carrageenan, an extract of red seaweed, is a good source of soluble fiber. It is widely used in the food industry, for its gelling, thickening, and stabilizing properties. Carrageenan is a vegetarian and vegan alternative to gelatin in some applications. It has also been the subject of many long-term dietary studies under defined regulatory conditions en route to its current global regulatory status. While some indicate that carrageenan safely passes through rat GI tracts without adverse effect when it is a dietary ingredient, other animal dietary studies have observed colitis-like disease and tumor promotion. This has caused some people to be concerned about the safety of carrageenan when used in dietary supplements.

The question of safety
So what is the bottom line? Is carrageenan a safe or unsafe dietary ingredient for humans? To answer this question, it is important to consider the amount of carrageenan used in animal studies. In a published scientific review called, "Review of Harmful Gastrointestinal Effects of Carrageenan in Animal Experiments,"1 the author discusses a variety of studies. When examining those in which the animals consumed carrageenan in water or food, negative effects were observed at levels of 0.2 to 15 grams per kilogram of body weight. That would translate to 15 to 1,125 grams of carrageenan daily for a 165 pound human being. At the high end of that range, that's the equivalent of eating 4500 calories a day just from carrageenan alone. My point is, the amounts used in these studies are typically far more than people would likely consume on a daily basis in dietary supplements; and speaking of people, it is important to note that the concerns about the use of carrageenan are based solely upon animal studies, not human studies. Nevertheless, there are human studies on carrageenan, and the results are different than those of the animal studies.

Human studies on carrageenan
In a double-blind, placebo-controlled study,2 255 patients with peptic ulcers received 0.75 g of carrageenan or a placebo each day for 22 months. The results were that, compared to placebo, carrageenan was effective for the treatment of peptic ulcer without noticeable side effects (p<0.025). The global judgment of effectiveness was made based chiefly on the x-ray and gastroscopic findings, and then on the outcome of such subjective symptoms as retching, vomiting, nausea, and anorexia.

Another randomized crossover study3 aimed to determine the effect of carrageenan incorporation into a meal on carbohydrate absorption in human subjects. The concept being that soluble fiber decreases the amount of carbohydrates that reach the bloodstream by delaying their absorption in the small intestine. This was tested by measuring blood glucose levels, a reflection of carbohydrate absorption. The total dietary fiber (TDF) content of the carrageenan (2.03 percent) meal was about three times that of the control meal (0.68 percent). The meal provided 14.84g (meal with carrageenan) and 3.45 g of TDF (meal without carrageenan), and were fed to the same ten fasting subjects at different times. The results showed the average blood glucose levels of subjects were significantly lower after consuming the carrageenan meal than when consuming the regular meal (P <or = 0.05 at 15, 45, and 90 minutes). Likewise, there was a significant lowering of total cholesterol (P <0.0014) and triglyceride (P <0.0006) levels after eight weeks with carrageenan. In fact, levels of HDL cholesterol (the "good cholesterol") increased significantly (P <0.0071) after eight weeks with carrageenan. 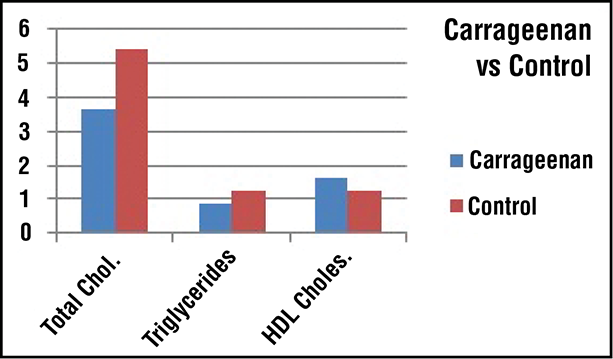 No side effects were reported in the study. The researchers concluded that the blood sugar lowering-effects of carrageenan could prove useful in the prevention and management of metabolic conditions such as diabetes.

There are also some human cell line studies, but I didn't include data on those because they don't necessarily reflect what happens in a live human body.