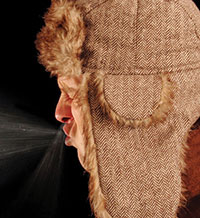 The U.S. government spends about one fifth of its budget on defense. In the same way, your body “spends” a lot of its resources to protect you from outside invaders—using your military-like immune system.

Yes, you can think of your immune system as a kind of military organization. And its mission is to protect you from outside invaders called antigens. Antigens include not only infections, but can include any protein that looks foreign to your immune system, including toxins, allergens, and even (and especially!) incompletely digested food.

Your immune system does not believe in the Geneva Convention, and it will kill outside invaders by any means possible, including chemical warfare (antibodies and cytokines), tank divisions (made up of whole armies of white blood cells), and more. This makes your immune system very complex—and very effective. But it remains so only as long as it has the resources needed to fight, and as long as it’s not constantly getting overwhelmed. In this article, I discuss the eight key factors that can sabotage your immune system—and nine tips that can help keep your system strong.

Okay, those are the potential problems. The good news is that some simple measures can help you maintain a healthy and strong immune system.