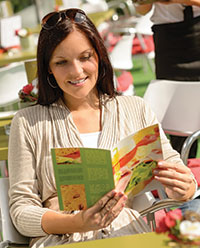 A recent study in the Journal of Nutrition Education and Behavior concludes you can eat out and still burn fat.

In this study, 35 healthy middle-aged women participated in a six-week program called Mindful Restaurant Eating, which teaches people how to eat out healthfully.

Now, keep in mind the goal of Mindful Restaurant Eating was to prevent weight gain in women, who fell into that perimenopausal age range where weight gain and ensuing problems like diabetes and heart disease more frequently occur.

In other words, researchers did not intend Mindful Restaurant Eating as a weight-loss program.

But that’s exactly what happened.

Researchers found these women who completed this program lost much more weight, ate fewer calories, and had fewer issues when they ate out. The program taught them how to choose healthy entrees and resist going face down in the peanut butter brownie bottom cheesecake.

You’re probably asking how these women lost weight eating out. After all, restaurant food often proves notorious for being loaded with sugar, trans fat, heavy sauces, and all kind of other things that don’t promote fat loss.

The answer is hardly groundbreaking. These women learned to make smart choices in restaurants with fewer calories and lower fat. While I’m all for reducing the gargantuan portion sizes most restaurants serve, I don’t think you need to focus so scrupulously on calories, and you need to worry even less on fat.

Don’t get me wrong. Some of those entrees at places like Cheesecake Factory have 3,000 calories and are loaded with damaged and even trans fats. You definitely need to pay attention to those things.

But rather than obsess over numbers, I want you to focus on quality foods when you eat out. Choose whole, unprocessed foods your great-grandparents might have prepared. By making smart substitutions, you can easily customize your plate in restaurants for optimal fat loss.

Employ these five strategies the next time you eat out and you’ll get similar (and maybe even better) benefits as the women did in that study: