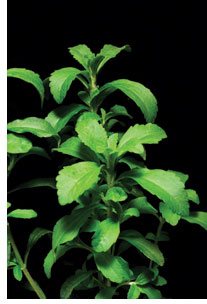 Stevia, sold as a “dietary supplement,” is no stranger to the health food world and under this heading one finds extracts of quite varying composition and purity. More narrowly, stevia also is used to indicate an extract consisting only of stevioside. The leaves of stevia rebaudiana Bertoni are the primary source, but related species are native from Mexico to throughout South America and known by names such as sweetleaf, sweet leaf and sugarleaf, as well as stevia. The leaves of the plant are 30–45 times as sweet as table sugar and stevioside is 200–300 times as sweet as sucrose. In Paraguay the plant has been used for centuries as a medicinal herb and as a sweetener for mate and other beverages. Stevia extracts of varying composition have been used widely as sweeteners in Japan since 1971 without restriction or reported health hazards. Indeed, there are both animal and human data that suggest that stevia extracts may increase insulin sensitivity and improve blood glucose control without side effects. Most health food shoppers no doubt assume that stevia is officially accepted as a natural, calorie free herbal extract that can be used as a sugar substitute or as an alternative to artificial sweeteners. After all, stevia in all of its forms can be purchased freely as a dietary supplement.

Those making this assumption would be wrong. To this day, stevia remains on a total United States FDA Import Alert as an “unsafe food additive”— the FDA technical category that includes sugar substitutes. The exception, as of December 2008, is the steviol glycoside called rebaudioside A, which is allowed to be sold as a “food additive,” that is, as a sugar substitute or sweetener. Rebaudioside A is available under trade names including Only Sweet, PureVia, Reb-A, Rebiana, SweetLeaf and Truvia. The developers of all allowed versions are Cargill and The Coca-Cola Company (in the case of Truvia), or PepsiCo and the Whole Earth Sweetener Company, a subsidiary of Merisant (in the case of PureVia).

In other words, stevia is safe if it is sold as a dietary supplement, but it is unsafe if sold as a food additive, which is to say, as a sweetener. The sole exception is rebaudioside A. How this state of affairs came about requires a bit of explanation.

No one doubts that there are incentives for the adoption of natural sweeteners. Our sweet tooth has created an enormous market, but one with an equally great downside. More than 60 percent of adult Americans are overweight or obese; moreover, year-by-year the epidemic of weight gain seems to claim a growing percentage of younger individuals. Artificial sugar substitutes have capitalized on our love/hate relationship with all things sweet, yet many consumers feel at least vaguely uneasy about habitually ingesting saccharin, aspartame, acesulfame K or sucralose. Despite this unease, natural sweeteners as of yet have not been able to break out of comparatively tiny niche markets.

Reasons for the failure of sales of natural sweeteners to expand fall under several headings. Taste is one of these.

Quite a number of carbohydrate sugar substitutes exist, but, along with varying amounts of calories, most of these provide less sweetness and a poorer flavor profile than is found with sucrose, much to the consumer’s chagrin. An example of this is tagatose, which is 90 percent as sweet as sucrose and has 1.5 calories per gram. Sugar alcohols would appear to be better candidates. Indeed, one well-known sugar alcohol, xylitol, is roughly as sweet as sucrose. It also offers the advantages of protecting against tooth decay while supplying 2.4 calories per gram. However, sugar alcohols can have a laxative effect in many individuals when ingested in significant quantities at one time. Another prominent concern is that sugar substitutes often are not useful in cooking because of flavor changes, a failure to lead to desired developments in texture and color when baked, and so forth. Stevia’s flavor profile typically exhibits a slower onset and longer duration than that of sugar; some extracts at high concentrations, however, can leave a bitter aftertaste.

Another hurdle is regulatory definitions, as in the case of stevia. In order to be labeled a “natural” sugar substitute as opposed to being a synthetic “food additive,” such as aspartame, a natural compound should also be a carbohydrate. Steviol glycosides in chemical terms have a glucose component, but this “sugar” is not readily cleaved and thus it is questionable whether stevia can be characterized as a carbohydrate any more than the flavonoid rutin can be characterized as a carbohydrate even though it is a flavonoid glycoside. Therefore according to some regulatory thinking, stevia must be labeled a “dietary supplement” and not a sweetener or sugar substitute.

In retrospect, the definitional hurdle for stevia seems to have played no role in the troubles the compound has faced in achieving acceptance by the FDA as a sugar substitute. Instead, a concern over safety was raised. The manner in which this came about and the attendant controversy could be expanded to fill many pages.

IS STEVIA SAFE?
Stevia leaves have been used for hundreds of years in Paraguay and Brazil to sweeten local teas and medicines and as a “sweet treat.” In the modern period, the Japanese have been using stevia as an at-home sugar substitute, in food products and in soft drinks (including Coca Cola) since 1971. Stevia accounts for 40 percent of the Japanese sweetener market. Stevia is widely used in East Asian countries and in many other states around the world. At the very least, it has been consumed safely by millions in Japan for approaching four decades without reports of toxicity.

Given its record of a long history of use, both traditionally and in modern industrial countries, the issue of stevia’s safety seems a bit of a stretch. Indeed, the circumstances surrounding the FDA’s declaring stevia an “unsafe food additive” and restricting its import led one Congressman to label the FDA’s action against stevia “a restraint of trade to benefit the artificial sweetener industry.” The FDA total Import Alert and restriction on stevia as a sweetener resulted from an anonymous 1991 “industry” complaint. Giving verisimilitude to the charge of collusion with industry is the fact the FDA deleted names in the original complaint in its responses to requests filed under the Freedom of Information Act. The FDA’s stated reason for forbidding importation in the Import Alert was and remains “toxicological information on stevia is inadequate to demonstrate its safety.” As many reviews have pointed out, the 1994 Dietary Supplement Health and Education Act forced the FDA to permit stevia’s use as a dietary supplement, although not as a food additive, a position that simultaneously labels stevia as both safe and unsafe depending on how it is sold. Tellingly, the FDA has never issued any document that declares in a binding fashion that stevia is unsafe and cannot be sold, only that it cannot be sold as a sweetener.

It has been observed that the study originally credited with leading to the import ban on stevia was so badly done that even distilled water would have been labeled a mutagen under its conditions. Be that as it may, at one point results of animal studies were adequate to raise the issue of whether processes in the gut are sufficient to produce a mutagen from stevia glycosides. The European Commission in 1999 banned the use of stevia in the European Union until these questions were answered. As of this writing, a variety of international and national health bodies all have dismissed the earlier concerns and given stevia a clean bill of health. Most recently, the European Food Safety Authority issued its allowance in a 2010 safety review establishing an Acceptable Daily Intake (ADI) for steviol glycosides expressed as steviol equivalents of four mg/ kg bodyweight/day.

The United States now, as it were, is the “odd man out” in its bifurcated assessment of stevia as safe as a dietary supplement and potentially dangerous as a food additive. As of 2008, this picture became more complicated in that the FDA accepted that a particular extract of stevia can be imported, labeled and sold as a sweetener. In that year, the FDA gave a “no objection” approval for GRAS status to Truvia and PureVia, both of which use stevia-derived rebaudioside A.

STEVIA FOR HEALTH
Today in the United States it is possible to purchase freely stevia in various forms as a dietary supplement and in the form of rebaudioside A as a sweetener. One issue of interest is whether stevia is more than merely a sugar substitute. Traditional use in South America with those suffering from diabetes supports the argument that stevia is potentially useful to those with blood sugar regulation issues. Modern research shows that rebaudioside A possesses insulinotropic effects. As noted in the outset, stevia supports blood glucose and insulin regulation and may even be useful for blood pressure support. In other words, stevia may be much more than merely a sugar substitute for those hoping to escape sucrose, fructose and artificial options. Sweet!