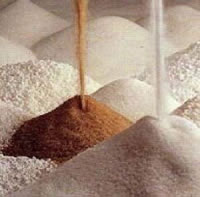 The Nurses' Health Study may answer this question, as researchers looked at intakes of sweetened soft drinks, refined grain, diet soft drinks and processed meats (and low in vegetables), and found that the "dietary pattern identified may increase chronic inflammation and raise the risk of developing type 2 diabetes." (Schulze 2005)

According to Sorensen of Denmark, observational studies have found that increased sugar intake is associated with high levels of CRP (C-reactive protein). (Sorensen 2005) CRP is a marker for cardiovascular disease, and in fact, a recent study linked high carbohydrate diets, oxidative stress, endothelial dysfunction and low-grade inflammation. (Dickinson 2006) We know that metabolic syndrome is a risk factor for heart disease, and among US youth, the development of this complex of symptoms is associated with CRP.

So we see a clear research link between our American love affair with sugar and the development of inflammation—which then leads directly to the development of both adult and juvenile-onset diabetes and cardiovascular disease. It is undoubtedly linked to inflammation-related diseases wherever they occur in the body.

There may be several reasons that sugar incites pain. We saw in earlier articles that sugar leaves an acidic ash in the body and hyperacidity is pro-inflammatory. Sugar effectively disables certain aspects of the immune system for several hours, depending on the amount of sugar consumed. A small human trial with participants between 20 and 34 years of age received 100-gram portions of carbohydrates in different forms. Results showed that all forms of simple carbohydrates resulted in a significant decrease in the ability of neutrophils to engulf bacteria, an effect that occurred rapidly after the ingestion of the sugars, and lasting at least five hours. (Sanchez 1973)

Sugar stimulates the secretion and response of insulin. Moderately elevated insulin elevates inflammatory markers throughout the tissues and the brain (possibly increasing the risk of Alzheimer disease).

What About Other Sweeteners?

The question will be asked, "If I cannot eat sugar, what about artificial sweeteners?" We never recommend artificial anything, especially sweeteners and fats. Aspartame is linked to many neurological and other disorders. Some researchers are trying, however, to see if aspartame can be used as an anti-inflammatory. A Sprague-Dawley rat study showed that aspartame did not reduce inflammation or increase motor activity. (LaBuda 2001) This same study suggested that the sweetener could be used as an analgesic, similar to aspirin but these results have been shown in only one study and should be considered extremely preliminary. Again, I do not recommend using artificial sweeteners because of the long history of pathological effects.

Xylitol, a natural non-caloric sweetener, may assist the immune system, if only topically. Researchers are looking at oral applications of xylitol in chewing gums and mints, and reduced risk of gingivitis, periodontitis and other diseases of the mouth. A Korean study indicates that Xylitol inhibits the growth of the bacteria, P. gingivalis, and inhibits a pro-inflammatory cytokine expression. (Han 2005) Cytokines are messengers of the immune system.

We do not have any information on stevia, an herbal non-caloric nutritious sweetener from Paraguay, nor do we have any information on lo han, a natural sweetener from China. Because these two sugar substitutes do not raise blood sugar levels, they would have no impact on insulin levels, which is hopeful. But we have no primary research on these two products as of yet.

Carol Simontacchi, CCN, MS, is the host of "Your Personal Health," a nationally syndicated radio show that airs on over 200 stations. An online columnist for Vitalcast.com, she is a certified clinical nutritionist in private practice in Portland, Ore., and the author of a number of books on nutrition. She lives in Vancouver, Wash.