If you love coconut and treasure its taste and health benefits as I do, this dessert is one you'll add to your list of easy favorite healthy treats.

TEMBLEQUE gets its name from the Spanish word tiembla which means to shake—also likened to the Spanish word temblor which is used to describe an earthquake or trembling—very appropriate for Ecuador known for its earthquakes. It's a pudding thickened with cornstarch resulting in a slightly firm pudding with a custard texture that has a little jiggle when shakenâ€”similar to Mexican flan but with its own unique flavor and texture.

This healthy (and admittingly habit-forming) delight is creamy, cool and most of all intensely coconut. The pudding can be poured into individual molds or into a 9 x 9 square pan and served in slices. I like to do the individual servings if I'm making them as a daily snack or serving to dinner guests. However, if I'm taking it to a party I make it in a pan for easy slicing and serving. It's very versatile because you can top with any fruit.

Health Benefits of Key Ingredients:
Coconut milk—Coconuts are highly nutritious and rich in fiber, vitamins C, E, B1, B3, B5 and B6 and minerals including iron, selenium, sodium, calcium, magnesium and phosphorous.

Unlike cow's milk, coconut milk is lactose free so can be used as a milk substitute by those with lactose intolerance.

Cornstarch—strictly used as a vegetable source for thickening, has little food value and is a carbohydrate; doesn't essentially add food value. If you are avoiding corn products you can use arrowroot.

Lakanto (Monk fruit) Sweetener—an all-natural sweetener used in the same quantity as sugar in a recipe. It comes in Original (white like refined sugar) or Golden (like brown sugar). Over a thousand years ago, in remote mountain highlands of Asia, a group of Buddhist monks, called the LoHan, achieved enlightenment through meditation, prayer and pure living. On the slopes of a primeval forest, the monks discovered and cultivated a rare fruit prized for its sweetness. This sacred fruit was named Monk Fruit, or LoHan Guo, after its devoted caretakers and was used in elixirs to increase chi, or life energy.

Monk Fruit was used for centuries in eastern traditional herbalism to increase chi and well-being, earning it the nickname "The Immortals' Fruit." We still grow and harvest Monk Fruit for LAKANTO® in the same pristine area and according to traditional and environmental methods.

Born from a proprietary mixture of the high-purity Monk Fruit extract and Erythritol, LAKANTO® is a delicious, all-natural, zero calorie, zero glycemic sweetener with the sumptuous rich taste of sugar. Unlike most fruits, whose sweetness comes from fructose, Monk Fruit's sweetness comes from natural mogrosides that are much sweeter than sugar. Modern research shows that Monk Fruit extract does not elevate blood sugar or insulin, making it a perfect sweetener for blood sugar and weight management. And it does NOT feed yeast or induce inflammation as sugar does.

Grand Marnier—an orange-flavored liqueur created in 1880 by Alexandre Marnier-Lapostolle. It's made by blending cognac brandy, distilled essence of bitter orange, and sugar. Yes, it's liquor. If you are avoiding liquor you can substitute pure essential oil of orange.

Cinnamon is a powerful spice used medicinally around the world for thousands of years. This ancient spice was once so prized that civilizations went to war over it. History dates the use of cinnamon to over 4,000 years. In the 1800's, supplies of cinnamon were discovered and planted in the Indonesian islands; later, trees were successfully grown in South America where it once was the spice of the elite. Today it is used daily in many cultures, specifically Latin and Asian cuisine because of its widespread health benefits, not to mention its distinctly sweet, warming taste and ease of availability and use.

According to researchers, out of twenty-six of the most popular herbs and medicinal spices in the world, cinnamon actually ranks number one in terms of its protective antioxidant levels!

The unique smell, color, and flavor of cinnamon is due to the oily part of the tree on which it grows. The health benefits of cinnamon come from the bark of the Cinnamomum tree—the bark contains several special compounds responsible for its many health promoting properties—including cinnamaldehyde, cinnamic acid, and cinnamate. 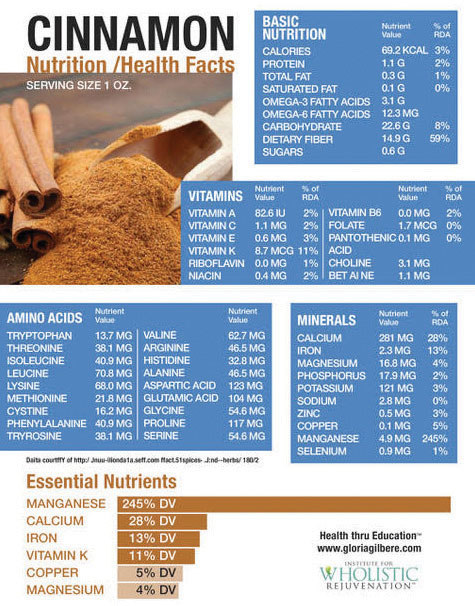 Researchers concluded that the health benefits of cinnamon can be obtained in the form of its pure bark, essential oils, in ground spice form (which is bark powder), or in extract form when its special phenolic compounds, flavonoids, and antioxidants are isolated. These compounds make cinnamon one of the most beneficial spices on earth, giving it antioxidant, anti-inflammatory, anti-diabetic, antimicrobial, immunity-boosting, cancer and heart disease-protecting abilities.