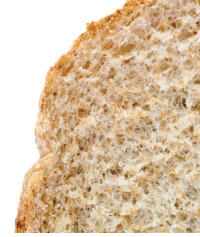 You can’t swing a rope without hearing some spokesperson for the American Dietetic Association tell you how great whole grains are and how you should make them a big part of your diet.

“Whole grains” are definitely better than processed grains. The question is “how much better” and the answer is… not so much.

Sure, this sounds like nutritional heresy, but consider the facts. Processed grains—like most cereals, pastas and breads—are bad because...

Whole grains are supposed to offer the solution to the problems of processed grains, but the truth of the matter is... they don’t. Grains—unlike fruits, vegetables and most nuts—can never be eaten without some processing. You can’t pluck a stalk of wheat and start chowing down. Even a natural, whole grain has to be turned into a food, and its “natural” state is much farther from “edible” than a berry or a carrot.

“If your whole grains have been ground into flour, then it’s not whole grain anymore,” says Todd Narson, DC. “The flour in these products was once a whole grain but it isn’t anymore.” Big food companies love to proclaim their products are a “good source of whole grains” but read the ingredients, not the advertising copy on the package. “Whole grain flour” is only marginally better than regular flour.

Then there’s the blood sugar issue. Because whole grains— in theory—are higher in fiber, they are supposed to have a much more muted effect on blood sugar.

But that’s not always the case. A quick glance at the glycemic load tables shows there’s only a few points difference between white spaghetti and whole wheat spaghetti, and brown rice and white rice are within spitting distance of each other. That doesn’t mean there aren’t good things in brown rice that aren’t found in white rice, but it does mean if you’re trying to control your blood sugar, whole grains are very far from a “free lunch”.

Finally, there’s the gluten issue. Gluten—a protein found in wheat, barley and rye—is a very reactive substance that causes a lot of problems for an awful lot of people. Shari Lieberman, PhD, CNS linked gluten to an enormous range of symptoms and disorders including neurological disorders, autoimmune disorders, and digestive disorders, and that’s just for openers. Dr. Leiberman suspected gluten sensitivity may be an issue in chronic fatigue, fibromyalgia, anemia, asthma and many other conditions.

Many people who have tried going off gluten report remarkable improvements in a host of symptoms they hadn’t suspected were linked to their food. If gluten might be a problem for you, whole grains won’t solve it.

So does this mean you should discard the concept of eating whole grains? No. But read labels carefully. Try to find “flourless” breads, or those made from sprouted grains. Check the fiber content on the nutritional facts label.

And remember, there’s no basic physiological need for grains in the human diet, so don’t worry too much about it if grains just aren’t doing it for you.

Eat them if you like—but if you’re one of the many people who feel better without them, don’t give it a second thought.