Looking through the world’s history books, honey pops up time and time again, including in records from the ancient Greeks, Romans and Egyptians. As well as being a desired food, it is also one of the oldest known medicines, with famous philosophers, such as Aristotle and Dioscorides, mentioning it being used for ulcers, wounds and even a salve for sore eyes.

In more recent years, MGO Manuka honey, sourced from the wildest, most beautiful areas of New Zealand, has developed a reputation for being the most powerful of all and it’s easy to see why. Manuka honey is widely believed to soothe, moisturize and nourish troublesome skin, and support digestive health. Studies have also shown that it is effective at treating upper-throat infections and wounds. It has been the go-to health and beauty product for health enthusiasts for years with stars such as Scarlett Johansson, Gwyneth Paltrow, Lizzie Jagger and world number one tennis player, Novak Djokovic, raving about it.

How To Identify Manuka Honey
Typically a dark brown color, Manuka honey is a thick, smooth, rich tasting honey. It is produced by honeybees feeding on Manuka tree nectar, a beautiful plant with white flowers, that grows uncultivated and flowers for just 2–6 weeks a year, in some of the most scenic and untouched areas of New Zealand. Maori, the indigenous people of New Zealand, have long treasured the Manuka tree (Leptospermum scoparium) for its special powers. Their medicine men boiled the bark and leaves for colds, using Manuka steeped in water for rheumatism, stomach upsets and dysentery and the bark for skin ailments. They even presented Captain Cook with a Manuka tea when he landed on New Zealand shores, which he continued to take after their meeting, as did his crewmen, to promote good health.

In more modern times, the power of Manuka honey was discovered when New Zealand farmers supplementing cattle feed with the honey realized that their stock never fell ill. Since then, it has become firmly associated with New Zealand and celebrated throughout the world as a naturally powerful ingredient and remedy.

Bees are faultless in their work but despite their best efforts, the quality and potency of the end product can vary. Honey can be damaged if it isn’t stored, processed or packaged properly, and there are also strict guidelines around what can be labeled as genuine Manuka honey. As with any food or health product, it’s important to be informed on how to identify the real deal. Along with taste, color and texture, there are several other factors that distinguish good quality Manuka honey from other honey varieties.

Shopping For Authentic Manuka Honey—Look For MGO
Those wanting to purchase the best Manuka honey products can find genuine, undamaged, premium New Zealand Manuka honey by following a few simple rules. One way to distinguish authentic Manuka is to look for honey with proven methylglyoxal (MGO) content. MGO is a naturally occurring compound found in high concentrations in Manuka honey—up to 100 times greater than ordinary honey—according to the University of Dresden in Germany—and is thought to be responsible for the unique bioactive and antibacterial properties of genuine Manuka honey.

The MGO system was first launched in 2008 and has since come to be the most widely accepted measure of determining genuine Manuka honey. It is supported by industry groups and organizations, such as the Ministry for Primary Industries in New Zealand, and leading international scientists, such as Professors Molan—founder of the Honey Research Unit at the University of Waikato, New Zealand and Henle—the head of the Institute of Food and Chemistry at the Technical University of Dresden, Germany. The higher the level of MGO in a product, the more potent the Manuka honey. For example, MGO 100+ Manuka honey is guaranteed to contain at least 100 mg of methylglyoxal per kilogram of honey. The MGO scale runs from 30 –1000, though experts recommend opting for at least MGO 100+ to enjoy the health benefits associated with Manuka honey. MGO 550+ is the highest level of methylglyoxal available from most producers and indicates an exceptionally strong and powerful Manuka honey.

It is also important to determine that Manuka honey has come from New Zealand, renowned for its native Manuka plant, and for producing honey untainted by antibiotics, additives and other chemicals. With some brands, this information can be found on the back of the jar or packet. If consumers choose a honey that is proven to be of a high MGO level and is produced from Manuka plants grown in New Zealand, they can be confident that they will get the genuine Manuka honey experience.

How Cyclodextrins Can Turbo-Charge Manuka Honey
Another exciting recent discovery is that the already powerful qualities of Manuka honey can be boosted further when combined with other beneficial natural ingredients. One of these complementary ingredients is cyclodextrins; a plant starch derivative that Japanese scientists at the highly regarded Kobe University discovered can aid the transportation of bioactives into the body.

When combined with active ingredients (such as the methylglyoxal molecules found in Manuka honey), it has been shown that the naturally fibrous cyclodextrin molecules can substantially elevate the beneficial activity by making them more stable, soluble and bioavailable for more efficient delivery over a longer period of time. Cyclodextrins also actively lower the glycemic index of Manuka honey, meaning this combination is an ideal solution for diabetics or people on low sugar diets. Like Manuka honey, cyclodextrin is a prebiotic to help aid in digestion.

Some pioneering Manuka honey producers in New Zealand are combining Manuka honey and cyclodextrins in tablets and capsules for more effective supplementation. This protected delivery system means it is now much easier to deliver the benefits of Manuka honey where it is needed most. Other delivery systems, such as nasal sprays and eye ointment are also likely to be developed in the future as the technology and capability of the ingredients is even better understood.

ENERGY: Manuka honey has a lower glycemic index (GI) than sugar, which means it is a good natural source of long-lasting energy. Try switching out white sugar for Manuka honey in teas and coffees. It’s also a great addition to a pre-workout breakfast. Blend into a delicious fruit smoothie with banana and ginger or a ripe mango.

SKIN HEALTH AND HEALING: Manuka honey is known to be anti-inflammatory and have antibacterial properties when applied to the skin. Clinical research has supported the idea that Manuka honey helps heal skin burns and wounds, it even works against some of the superbugs. This means that it may help in treating sore throats and irritated skin. To soothe skin, add Manuka honey to a homemade face mask. Leave on the skin for 10–20 minutes, and then gently wash it away with warm water.

DIGESTIVE HEALTH: It is widely believed that Manuka honey can assist with digestive health. Scientific studies have shown that Manuka honey may be effective in the stimulation and growth of beneficial bacteria in our digestive tract. Mix with warm water and enjoy as a healthy drink to kick off the day. Make sure the water isn’t boiling as this will damage the nutrients in the honey. Alternatively, eat straight off the spoon! 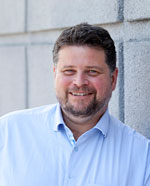 Dr. Mike Durbin has a PhD in Microbiology/Immunology and is General Manager–Wellness at Manuka Health New Zealand. He has extensive experience in multiple business environments including pharmaceuticals, biotechnology and healthcare.

He is passionate about raising awareness of the bioactive properties contained in Manuka honey and other native New Zealand flora and fauna, and supporting that with strong science-based research and new delivery technologies.