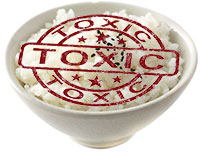 All major news agencies are reporting the latest warning about levels of arsenic in a food staple for most of the world—rice. I’ve previously written blogs on this topic in order to particularly warn mothers to limit the amount of rice fed to infants and children. Now with another round of new findings and warnings, it’s important we take note and learn some precautions that could help reduce this carcinogenic toxic element in our food supply.

SCIENTIFICALLY SPEAKING: Arsenic is a naturally-occurring element unavoidably present everywhere in the environment for thousands of years—it's in air, water, rocks and soil, which is how all plant foods, including rice, take it up—in other words absorb it through its roots—regardless of whether the farming method is conventional or organic. All plant foods unavoidably contain some level of arsenic.

Deadly Carcinogen…
Inorganic arsenic is considered a level one carcinogen, linked to lung and bladder cancer. On September 19, 2012, the FDA announced it has concerns about rice and arsenic and is studying the issue, meanwhile, recommending a varied diet. This “let’s wait and see” attitude is fueling the fire of controversy for consumers and reporting agencies who monitor our food supply.

Consumer Reports questions why safe standards are not already in place when the facts have been identified. According to Rangan, "Foods really shouldn't be any different. As we look at the levels we're finding in these products there needs to be a standard set for these foods. We called for standards on apple juice in January; we're calling for that again in rice products today." His concerns refer to a January investigation of data released by the FDA of arsenic levels in apple and grape juice.

Food for Thought…
If you have any doubt that arsenic is toxic…at any level…below is a direct quote from the government’s own website on its position:

Arsenic occurs naturally in the environment as an element of the earth's crust. Arsenic is combined with other elements such as oxygen, chlorine, and sulfur to form inorganic arsenic compounds. Exposure to higher-than-average levels of arsenic occurs mainly in workplaces, near or in hazardous waste sites, and areas with high levels naturally occurring in soil, rocks, and water. Exposure to high levels of arsenic can cause death. Exposure to arsenic at low levels for extended periods of time can cause a discoloration of the skin and the appearance of small corns or warts. OSHA.gov.

As a medical researcher-health detective, health professional, mother and grandmother I ask, “If our regulatory agencies acknowledge that low levels of exposure can cause outward manifestation on the skin, isn’t it long over-due to study exactly what it’s causing internally, including within the brain and that of developing fetuses?

Brown or White?
Health care practitioners recommend eating brown rice products rather than the carb-intense white rice for overall better health, especially those consumers limiting their carbs because of diabetes, yeast overgrowth and other immune disorders. That said, when it comes to arsenic-containing foods, the less nutritional and higher in glycemic index white rice is actually healthier than the brown variety. Why? Because toxic levels of arsenic are most prevalent in the outer layers of the grain and white rice is polished—removing some of those layers.

How Much is Too Much?
According to Consumer Reports, consumption of rice products (whether organic or conventional) should be limited to one serving a day, especially for babies and those with compromised immunity.

You can, however, do your part to remove as much arsenic as possible by implementing the following:

CAUTION: Current reports caution that children under the age of 5 should not be given rice drinks or rice snacks as part of their daily diet. "We're not saying never eat rice products, we’re saying its consumption should be VERY infrequent," stated Michael Hansen, senior scientist on the Consumer Reports study.

Although no products were named in the report, Nestle, the parent company of Gerber, said in an unsolicited statement to ABC News, "All Gerber products are safe to consume, including Gerber rice cereal and Gerber SmartNourish organic brown rice cereal." They specifically added that although they monitor arsenic levels, consumer concern led them to "exclusively use California rice in the production of our rice-containing infant nutrition products because California rice has the lowest naturally occurring arsenic levels for rice grown in the United States." The USA rice federation does not dispute the findings, but says the results are overblown since there is no documented evidence of actual illness linked to rice…sound familiar?

According to experts, rice contains more arsenic than other grains because it is grown while submerged in water. Arsenic does appear naturally in the earth, but Consumer Report says levels have been increased by the use of arsenic-laced fertilizers. Consumer Report scientists explain that arsenic is fed to chickens, turkey, and pigs, and their manure is used as fertilizer for rice and other crops.

The legal widespread use of arsenic through so many forms introduces it into our environment, our food supply and eventually into our bodies—it is beyond comprehension why our agencies whose responsibilities are to protect us still allow a “little bit of carcinogenic poison” to enter our food chain—Poison is Poison!

The United States has established federal limits for arsenic in drinking water at 10 parts per billion (ppb). However, when it comes to monitoring arsenic levels in most foods, it has not set limits.

Arsenic is naturally present in water, air, food and soil in two forms, organic and inorganic. According to the FDA, organic arsenic passes through the body quickly and is essentially harmless. Inorganic arsenic—the type found in some pesticides and insecticides—can be toxic and may pose a cancer risk if consumed at high levels or over a long period.

Inorganic arsenic is deadly at high doses—a known carcinogen linked to a variety of human cancers, including skin, lung and bladder, as well as heart disease and other illnesses.

Organic arsenic is believed to be far less harmful, but two organic forms measured—called DMA and MMA—are classified as possible carcinogens, according to Consumer Reports.

Food is a major source of arsenic in the American diet. Besides being found in rice, it can be found in fruits, vegetables, and seafood.

It is almost impossible to say how dangerous these levels are without a benchmark from the federal government. Consumer Reports uses New Jersey's drinking water standard—a maximum of 5 micrograms in a liter of water—as a comparison, because it is one of the strictest in the country. But it is unclear how accurate it is to compare arsenic levels in water and arsenic levels in rice—most people consume more water than rice, so drinking water standards may need to be much tougher in view of new findings and concerns for long-term health risks.

How much organic and inorganic arsenic rice eaters are consuming, and whether those levels are dangerous, remains to be seen. I know one thing; I’ve limited my rice consumption and I’m using a lot of H2O2.

Balance, Balance, Balance…
One thing I emphasize a great deal in consulting with clients is to constantly rotate the foods and supplements they consume. Why? Because everything in life requires balance in order for our body to perform at its best. If you eat the same nuts, for instance, eventually you’re likely to become allergic to them and all nuts in that genre. The applies to supplements. That said, I am not recommending we all stop eating rice, God forbid. What I am advising is that we look closer at a balanced diet. Health thru Education© is what I teach and practice…that’s what it’s all about—armed with the knowledge of foods that have potential toxicity, you can choose how much exposure you’re willing to subject you and your family to.

The Way I See It… 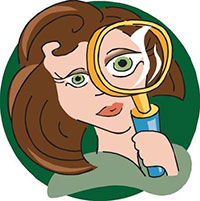 I mostly consult with clients whose immune systems are no longer able to protect them or are severely compromised. When I see results from their Tissue Mineral Analysis, performed on many of those I consult with, the levels of arsenic are higher and higher through the more than three decades of working with chemically-induced immune system disorders, digestive and inflammatory disorder—these new reports are shedding light on some of the sources of high arsenic levels when previously it was a test result that had clients and practitioners of natural health continually “digging” for more clues.

Scientists have known for decades that arsenic is present in rice, but the issue has renewed interest as consumers are more interested than ever in what they eat, and that technology has advanced to the point that inorganic and organic arsenic can be measured separately.

In closing, “A little WILL hurt” after all, it IS Arsenic!