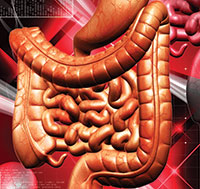 The gut is the largest immune system organ—if your gut is unhealthy…so are your immune responses. For an organ that will digest approximately 23,000 pounds of solid waste in a lifetime, it is still misunderstood, abused, ridiculed and neglected. The immune system is a complex, multilevel defense system that protects the body from foreign invaders—a virtual army of defenders— containing more than 70 percent of our immune system in the gut.

It’s also important to note that half of the body’s nerve cells are located in the gut! That said it’s no wonder scientists finally validated that we have a gut-brain connection inherent to the nervous system within our bowel. This nervous system is able to mediate reflexes in the digestive system without input from the brain or spinal cord—another example of our creator’s “magic”. Because of this, the so-called “nervous system in the gut” is able to accomplish some very important jobs without our conscious thought, hence, our second brain.

Feelings and Emotions Count…
What has a greater health-depleting impact/influence on your digestive system – NOT counting food? It might surprise you that numerous studies show that stress, anger, fear, anxiety/ panic, and depression have a profound effect on our digestive system…particularly our gut. Sorting out those “gut feelings” will go a long way to assisting overall gut health.

Because digestive function has an impact on the brain it’s important we understand that without taking natural methods of reducing the overall toxic burden within the body—emotionally and in our gut—we cannot expect to achieve wellness. Digestive disorders occur for a number of reasons such as from medications, toxic exposure, poor diet, excessive yeast (Candida), enzyme deficiency, and leaky gut (autointoxication). According to Leonard Smith, MD, “Virtually any chronic disease can have its roots in poor digestion and absorption of nutrients, increased intestinal permeability and dysbiosis—the hallmarks of digestive dysfunction.”

Brew a Better You…
According to, Charlotte Gerson, daughter of the late Dr. Max Gerson, “It is difficult to describe the incredulous facial expressions which ripple across a medical school lecture audience as the topic of coffee enemas is introduced.” Embarrassed sniggering is heard from several seats in the hall. Just then, a wise guy heckles, “How do you take it?” Charlotte Gerson didn’t miss a beat, answering, “Black—without cream and sugar.” After the laughter relaxes the entire room, Charlotte goes on to explain the aspect of reducing the body’s overall toxic load by administering coffee enemas—a practice brought to the forefront by her famous father at his world-renowned clinic.

Our bowel is intimately connected to most of our organs— in one way or another. That said, the practice of colon cleansing with coffee was investigated, studied and applied by two German professors who took interest in introducing caffeine, via coffee, into the rectum of laboratory animals. They found that the caffeine entered the liver via the portal system and caused an increased bile flow. This bile, in turn, allowed accumulated poisons and toxins to be released and evacuated from the body. Years later, realizing the importance of detoxification, Dr. Gerson incorporated coffee enemas in his therapy protocols, particularly for his cancer patients. Gerson observed that the coffee enema, to the patient, means relief from depression, confusion, stress/anxiety, multiple allergy symptoms, alleviation of liver pain, and relief from generalized severe pain. Caffeine enemas, coffee dialysis, cause dilation of the bile ducts, which then facilitates excretion of toxic products by the liver and the dialysis of those toxic products from blood across the colonic wall.

Coffee, Your Way!
There are now a growing number of consumers, physicians and integrative health professionals who are more responsive to discovering and implementing newer and rediscovered therapeutic options that have been used for centuries, especially in cultures outside the U.S. Not until now has a book been written with a repository of information and recommendations for the layperson to take advantage of a therapy used worldwide for decades. A book just released by author Mark Buse— Coffee Dialysis: The Supreme Detoxification is written from Buse’s more than 40 years of experience in colon therapy and as a nationally board certified colon hydrotherapist, about coffee dialysis and the wellness benefits he and those he counsels have benefited from. Buse’s book will enable every reader to find practical therapeutic approaches to their dis-orders and adapt those approaches in the reader’s own evolution towards obtaining a better level of health, wellness and the ability to age without looking or feeling old. Other books on the subject and perspective are not comprehensive; this one is! Buse has taken a bold step in providing a sound wholistic outline that has benefited the masses with dis-orders that are now in epidemic proportions because of living in a toxic world and a toxic life-style.

This book came at the perfect time—an invaluable asset to not only those affected by dis-orders, but also for medical professionals to assist the affected in better understanding one of the rarely addressed or practiced critical issues in U.S. health today—toxic overload and how to safely and effectively reduce it.

You, the patient, control the frequency and administration of this life-enhancing therapy—the only process of its kind that is not self-limiting by its own toxicity. Combined with any natural herbal or nutraceutical detox protocols, under the guidance of your natural health professional, to reach individual cells, unlimited detox is enabled. No detox program should be undertaken absent the coffee dialysis enema!

Caffeine WITHOUT the Usual Side Effects…
Many clients react negatively to caffeine—I do. With a coffee dialysis enema the expected caffeine rush and racing heart are usually avoided because the caffeine chemical enters the large intestine without going through the digestive tract. When you drink caffeine you put the chemical directly into your digestive system—causing the side effects of caffeine as well as it being counterproductive to the entire detox processes.

In the book, Coffee Dialysis, Buse also shares the research from integrative medical professionals, natural health practitioners and clinics that apply coffee dialysis to instantly remove all pain killer medications from incoming terminal cancer patients and those with acute illnesses. Gerson reported that by administering coffee dialysis in his clinic the pain relief is immediate and persistent.

“The inflammation of the liver, specifically in cirrhosis, can be due to ongoing viral infection, toxic exposure (often alcohol or drugs) and absorption of toxins from the gut.”

Scientifically Speaking…
According to researchers at the University of Minnesota, Department of Pathology, coffee dialysis stimulates an enzyme system in the liver; glutathione-S-transferase—capable of removing a vast variety of electrophiles from the bloodstream— electrophiles are free-radicals.

Under the influence of a coffee dialysis enema, the glutathione-5-transferase enzyme system, which accounts for about three percent of all liver enzymes and is responsible for removing electrophiles from the blood system, will be increased in activity from 600—700 percent above normal. No substances/materials other than coffee are known to stimulate it as much!

And during the time the coffee dialysis enema is being held in the colon, all the blood in the body passes through the liver at least five times and all the blood in your body passes through the liver every three minutes. In addition to stimulating the enzyme system, the theobromine, theophylline, and the caffeine in the coffee all have physiological effects. Among these are the dilation of blood vessel and bile ducts, the relaxation of smooth muscles, and the increase of bile flow.

“I’ve been using…coffee dialysis enemas…for 14 years with only one effect: I felt better from the first one I did. I’ve never looked back and I feel great when I do them. All the terrible things that are supposed to happen don’t happen. Coffee enemas don’t destroy bowel function or wipe out your intestinal flora, but what they do is help the liver work better. They are extremely powerful, one of the most powerful detox procedures that we use—my whole staff does them; they simply feel better when they do.”

What Does Coffee Dialysis Benefit?
According to Gerson’s caffeine dialysis enema research and clinical experiences, the mechanism that facilitates this therapy to work includes, but is not limited, to the following:

According to Gerson, the above mechanisms are the ultimate detoxification—where all other forms of in-depth detox efforts ultimately fail to avoid the Herxheimer Effect – the “traffic jam syndrome” that, at times, can be fatal.

The Way I See It…
After counseling thousands worldwide with chronic disorders that include, fibromyalgia, chemical sensitivities, autoimmune disorders, inflammatory and digestive disorders, I can assure you that the clients that do not recover, or do not regain full quality of life, are those who refuse to detoxify their liver, particularly via the colon. The road to health is paved with good intestines—are you ready to embark on a path of wellness? If you are, consider coffee dialysis—it is the missing piece in recovery and wellness protocols.