With gluten-free products readily available in most stores, you might think that the understanding of Celiac Disease would be at an all-time high. However, there is still a little known side to this autoimmune disease, called Dermatitis Herpetiformis (DH).

For most celiacs, the symptoms of the disease are digestive, for example: bloating, upset stomach, and vomiting. However people can also experience sudden or unexpected weight loss, hair loss, depression, tiredness, and anemia. With these symptoms, your doctor might carry out a diagnostic test for Celiac Disease and you will get a definitive yes or no answer as to whether Celiac Disease is the cause of your symptoms. However, there is more to Celiac Disease than digestive symptoms, one which I have personal experience.

In my early 20’s, during a period of stress, I developed little clusters of very itchy blisters that crusted over. They appeared on pressure points, so elbows, knees and buttocks. It is difficult to explain just how itchy this rash is, but it has been compared to being whipped with stinging nettles, so you can imagine the intensity of the discomfort. This carried on for weeks then months in varying degrees of cover.

In trying to identify the source of the problem, I visited my Doctor and, at that time, the usual causes were discussed, e.g. contact dermatitis, (so perhaps changing washing powders as it’s irritating my skin, or new clothing or a product I was applying to my skin), alternatively a side effect to an existing medication, or a fungal disease, etc. Rashes are notoriously difficult to diagnose and this rash was going to challenge the most astute of the medical profession.

After a prolonged period, it was suspected my rash might be an unusual, but not unheard of, skin manifestation of Celiac Disease: Dermatitis Herpetiformis (DH). The small blisters occur anywhere on the body and can appear at any age, but are most common in people in their thirties. This condition is more common in men than women, and effecting (UK data) 1 in 10,000 people. This suspicion resulted in my having the standard test for Celiac Disease (blood test and endoscopy in the UK) and also a skin biopsy, which was actually painless and carried out under local anaesthetic.

When all my results came back I was a celiac with the skin manifestation DH. This meant for me some Dapsone tablets to address the rash (with regular blood tests), until the gluten-free diet kicked in and the Dapsone could be phased out. In time and following a strict diet, symptoms would fade and my skin would eventually return to normal.

Both the skin and the abdominal symptoms, which do not always present together, are a life long condition with the gluten-free diet also a life long commitment for both manifestations of the same condition.

Small intestine damage
There is an even more serious side to Celiac Disease; it is not an allergy but an autoimmune disease. That means the body’s immune system is triggered in error to the proteins in the grains of wheat, rye and barley (and for some people oats too) believing it to be an enemy entering the body, like a virus for example. As the body attacks the gluten it damages the small gut, and this is the unseen damage that will cause long term and potentially serious health issues.

It is this unseen damage to the small gut that is really the main reason to go gluten- free and to stay gluten-free after diagnosis.

To show the source of the problem, the following images show the villi, which are the hairs in the small gut that absorb the goodness in your food. A celiac ingesting gluten will cause the immune response which will in turn damage the villi. This damage will flatten the villi and can result in poor absorption of nutrients, which can result in: malnutrition, anemia, osteoporosis, possible fertility problems and cancers. This area of damage exists in both Celiac Disease sufferers with abdominal symptoms and those suffering with DH symptoms: 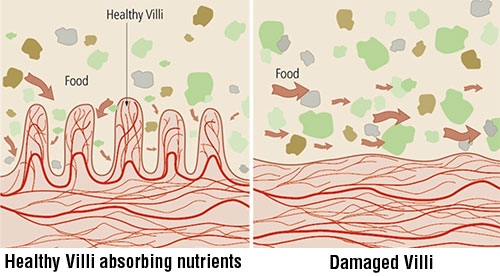 If you suspect you may have symptoms of Celiac Disease or DH it is important to continue eating gluten foods until you are tested. This is because the tests look for the antibodies produced by the body in response to gluten.

Although initially alarming, Celiac Disease and DH are both manageable. Maintaining a strict gluten-free diet will allow the body to recover and remain healthy.

For my own story, my gut healed and I was able to stop taking Dapsone tablets. In times of extreme stress my rash does sometimes return despite following a strict gluten-free diet. Dapsone is still available to me, but I usually find that the rash subsides on its own now once the stress reduces.

It was also recommended at the time that family members with any similar symptoms also be tested for Celiac Disease as it can run in families, and my mother was also found to be a sufferer, after many years of undiagnosed sickness and irritable bowel.

Hopefully as awareness is raised of all the symptoms of this condition, many people will be able to live happier lives. If in doubt, please speak to your doctor about the initial blood test for Celiac Disease and Dermatitis Herpetiformis (DH).

Photographs and some factual information from:
Coeliac UK, photographs and images copyright. Permission provided to author, Jennifer Smith Contact at Coeliac UK: Kate Newman, PR: This email address is being protected from spambots. You need JavaScript enabled to view it.

Jennifer is a freelance writer and health journalist with over 20 years personal experience of Celiac Disease/Dermatitis Herpetiformis (DH). A resident of the UK, Jennifer Smith is a member of its national charity ‘Coeliac UK’: an organization for people with Coeliac Disease and DH, striving to raise awareness of this autoimmune disease. A graduate of psychology and sociology, she uses her skills to examine the broader issues of diet and health. In her spare time she is a Peer Mentor at a children’s charity.