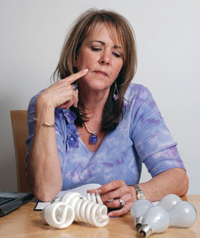 Do you have florescent light bulbs in your home or business? If so, congratulations, you are now a “hazardous waste handler.” The energy savings of fluorescent bulbs are definitely NOT worth the health risks that I’m sharing with you in this investigative piece.

Do you know if one breaks over carpet, you’d have to replace the entire carpet to remove mercury contained in the bulb? Some consumers have become so ill they’ve actually had to seal-off the contaminated room until it can be safely de-contaminated by environmental remediation specialists.

The media and lawmakers encourage us to purchase compact fluorescent lights (CFLs) instead of incandescent because they use less energy—new, low-energy, compact fluorescent bulbs do use 30 percent less energy than incandescent bulbs, despite their higher initial cost. Granted, we each must do our part to conserve energy, but not at the cost of our health! The missing link is that they are not telling us the dangers of CFLs particularly when handling them, or when they break.

With help from the media, proponents of CFLs convinced Congress to ban incandescent bulbs in the energy bill President Bush signed into law Dec. 19, 2007. The bill increases efficiency standards and bans traditional bulbs by 2014—some countries, including Great Britain, ban the use of traditional light bulbs by 2012. In the U.S., laws passed by Congress demand that all light bulbs be 25 percent to 35 percent more efficient by 2014, citing $40 billion in savings between 2012 and 2040, and the need for 14 fewer coal-fired power plants.

Each CFL contains about 5 mg of mercury—enough for state environmental agencies to recommend complicated and expensive cleanup for accidental bulb breaks in homes! The 5 mg of mercury are enough to contaminate 6,000 gallons of water beyond safe drinking levels, according to research from Stanford University. ALWAYS use disposable gloves when handling CFLs—the oil from our skin can cause them to break or even explode.

Other Health Hazards of CFLs
The low-energy CFL light bulb is replacing the staple incandescent bulb that has illuminated our homes and offices for over a hundred years. Now, researchers and physicians are discovering that use of CFLs are causing disorders such as rashes and swelling for thousands of people.

In addition to concerns over mercury pollution that broken compact bulbs present, Dr. Robert Sarkany, a photo-dermatologist at St. John's Institute of Dermatology, St. Thomas' Hospital in London, told a Daily Mail investigative reporter that he's treated patients who have skin rashes due to exposure to low-light fluorescent bulbs.

Physicians now worry the new bulbs could even cause skin cancer. "It is important that patients with photosensitive skin eruptions are allowed to use lights that don't exacerbate their condition," said Dr. Colin Holden, president of the British Association of Dermatologists. "Photosensitive eruptions range from disabling eczema-like reactions, to light sensitivities that can lead to skin cancer."

Those who have lupus, scleroderma, and some forms of dermatitis, eczema, and psoriasis are especially at risk, and British charities say that the light from low-energy light bulbs are also triggering migraines, epilepsy, disorientation, brain-fog, and lethargy, to name a few symptoms. Sufferers have appealed to the British Parliament to exempt them from having to use the new bulbs.

I do not use or recommend any type of fluorescent bulbs because of health-related side-effects as cited above to mention a few. In addition, I have found other conditions are accelerated when the individual is exposed to fluorescent lighting of any variety including, but not limited to, fibromyalgia pain, arthritis, general inflammatory conditions, muscle/joint stiffness, eye disorders, and, I believe, it may even lower immune responses and trigger allergies.

I hope, after reading this article, you will use incandescent, LED, or Halogen lighting and conserve energy by only using lights as needed. If you've ever lived in a home powered by solar energy, as I have, you'd be acutely aware of how to live with comfortable conveniences while conserving your health and energy, naturally.