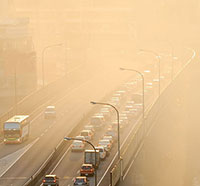 As a doctor of natural health, specializing in identifying causes, effects and non-drug solutions to chemically-induced immune system disorders, most of my clients are extremely sensitive to environmental pollutants. I, for one, nearly lost my life due to liver damage from prescription drugs necessary after a life-threatening accident. This immune system dysfunction caused me to be allergic to everything I ingested as well as to chemicals in the environment. I experienced anaphylactic responses five to seven times a day until I practiced what I teach and regained my health. That said, I was housebound for several months and diesel and all petrochemical exposures were as reactive to my shattered immune system as they are to those I consult with to assist in regaining their health after their immune defenses no longer protect them.

It's no secret diesel emissions can cause adverse health effects; I see it daily in my clients. The effects, to mention a few, include:

Diesel Emissions and Health…
Emissions from diesel engines found in trucks, ships, locomotives, agricultural and construction equipment-especially the microscopic soot known as "particulate matter" (PM)-create serious health problems for adults and have extremely harmful effects on children, the elderly and those with compromised immune systems. Children are particularly adversely affected by diesel emissions because their respiratory systems are still developing; and they have a faster breathing rate. Public health authorities associate exposure to PM with an increased risk of premature death, greater number of hospital admissions for heart and lung disease, and amplified adverse respiratory symptoms such as asthma and COPD. Long-term exposure to diesel exhaust may also pose a lung cancer hazard to humans.

Statistically Speaking…
According to the California Air Resources Board and the American Lung Association, nationwide particulate matter from diesel emissions causes 15,000 premature deaths every year.

Premature deaths linked to particulate matter are now at levels comparable to deaths from traffic accidents and second-hand smoke in California, for example.

Recent studies of children's health conducted in California have demonstrated that particle pollution may significantly reduce lung function growth in children because particulate matter becomes embedded in the deepest recesses of the lung where it can disrupt overall cellular processes.

Seeing What You Breathe…
Diesel exhaust also contains nitrogen oxide (NOx) - a precursor to ozone, or "smog." In sufficient doses, ozone increases the permeability of lung cells, rendering them more susceptible to toxins and microorganisms. Recent evidence links the onset of asthma to exposure to elevated ozone levels in children who exercise.

Attaining PM standards in California, for example, would annually prevent about 6,500 premature deaths, or 3 percent of all deaths. These premature deaths shorten lives by an average of 14 years, roughly equivalent to the same number of deaths (4,200 - 7,400) linked to second-hand smoke in just the year 2000.

The Way I See It…The time is now for safe, green solutions that can be added to our diesel fuel at a fraction of the cost of any of the other modifications or retrofit options presented by the EPA and other regulatory agencies.