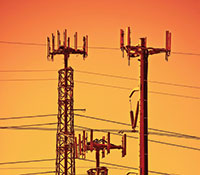 The latest form of environmental pollution—and one that industry, government and wireless consumers don’t like to acknowledge—may be the most devastating threat to health yet: electromagnetic fields (EMFs). A few years ago, I was so concerned that I took a certification course in the detection and harmful effects of EMFs. What it taught me, above all, was how much the scientific community is learning daily, and how little we in the medical profession knew. This area was both frightening and daunting in its scope. I’m grateful that following Devra Davis’ Disconnect: The Truth About Cell Phone Radiation we now have Zapped to educate the public on this serious issue.

That’s not all: Although actual tissue heating does not occur, EMFs also cause breaks in DNA, speed up cell division, disrupting the orderly process of chromosome matching and detaching, and activate stress protein or heat shock proteins. And as Anne Louise Gittleman writes in Zapped: Most disturbing of all, the Swedish National Institute for Working Life found that people using cell phones for 2,000 hours—a total most of us could easily rack up over the years—had a 240 percent increased risk for malignant brain tumors on the side of the head where they usually held their phone.

So, what do we do to avoid these dangers? I’m relieved that Gittleman, my friend and colleague and author of over 30 bestselling books, has tackled this topic. We’ll learn that most of us don’t need to give up all the digital and electronic gadgets that make life so much easier. To protect ourselves, we first need to recognize the risks and then make smart choices in how we use all the available technological wonders.

Why Are EMFs So Dangerous?
What most people don’t realize is the human body is naturally electrified. From the organic computer that is your brain, which sends out sensory messages like hunger and pain, to the energy that pumps your heart and makes your muscles contract, electricity powers your body. This innate electromagnetism within you is so critical to your daily functioning that modern medicine uses it in diagnostic testing (including electrocardiograms and MRIs) and, increasingly, to heal.

The “body electric” is an exquisitely tuned and sensitive creation, but unfortunately, human beings (and animals) respond favorably to only a very small range of electromagnetic frequencies. And there’s a big difference between the body’s natural electricity and the man-made electromagnetic frequencies that surround us 24/7 today. According to New York Times reporter B. Blake Levitt in Public Health SOS: Most living things are fantastically sensitive to vanishingly small EMF exposures. Living cells interpret such exposures as part of our normal cellular activities (think heartbeats, brainwaves, cell division itself, etc.). The problem is, manmade electromagnetic exposures aren’t “normal.” They are artifacts, with unusual intensities, signaling characteristics, pulsing patterns, and wave forms. And they can misdirect cells in myriad ways.

Some of this radiation—extremely low frequency (ELF) radiation in power lines, the radio frequency (RF)/ microwave range where all things wireless live, intermediate frequencies (“dirty electricity” or freaky frequencies linked to sick building syndrome), and the highest frequencies (gamma and X-rays)—is more damaging than natural frequencies to which humans (and animals) have adapted over millennia. Today, most Americans are constantly exposed to artificial frequencies, given the rapidly escalating pace of microwave and wireless expansion.

The bottom line is that electropollution—from cell towers, computers, cordless and mobile phones, PDAs, Wi-Fi, even the electrical appliances and wiring in our homes, offices and public buildings—continuously disturbs the sympathetic nervous system. This, in turn, elevates the body’s fight-andflight response, raising levels of the stress hormone cortisol. Fluctuations in cortisol lead to a wide range of health concerns ranging from belly fat and thinning skin to accelerated aging, blood sugar imbalance, cardiovascular problems, erratic sleep patterns and mood disturbances. Dr. Stephen Sinatra elaborates on this issue in his new book, Earthing.

Your body responds to EMFs as though they were public enemy number-one, triggering what two-time Nobel Prize nominee Robert Becker, MD, in his 1998 book The Body Electric, called “subliminal stress.” While intellectually you don’t recognize this kind of stealth stress the way you would overwork or being stuck in traffic when you’re late for an important appointment, your body’s internal antennae pick up on it in several ways, according to the late scientist, Dr. W. R. Adey, from Loma Linda University:

Recent research by Magda Havas, PhD, associate professor of Environmental and Resource Studies at Trent University in Canada, shows that dirty electricity—EMFs in electrical wiring—can raise blood sugar levels in diabetics and people at risk for diabetes. “Exposure to electromagnetic pollution in its various forms may account for higher plasma glucose levels and contribute to the misdiagnosis of diabetes,” she writes. Dr. Havas’ Web site is a gold mine of information on the entire topic of EMF pollution, as is Dr. Mercola’s EMF site.

Electromagnetic Hypersensitivity
There are “canaries in the coal mine”—hypersensitive individuals who are severely weakened by EMFs, and find themselves marginalized by the medical profession and society in general. Some must live in areas far from cell towers, Wi-Fi and the like. On a cellular level, these individuals have measurable damage to the mitochondria, the energy factories in each cell, and require reparative nutrients, for starters. I recently heard from a concerned family member of a man who had been exposed over time to a cell tower beaming through his office window. Quite ill, he was nonetheless unwilling to move his office location as I suggested, and I didn’t hear from them again. Ignoring the messenger, however, doesn’t solve the problem.

Zap-Proof Your Children
Today, an estimated 31 millions kids are on their cell phones close to four hours a day. Mobile phone companies are even marketing phones to preschoolers. Gittleman writes: The trouble is, kids absorb 50 percent more electropollution than adults. One study finds that a cell phone call lasting only two minutes can cause brain hyperactivity that lasts up to an hour in children. Because their skulls are smaller and thinner than adults, EMFs penetrate much deeper into children’s brains. Kids’ brains are also more conductive due to their higher water and ion concentration.

The Toronto Board of Health recommends that children under eight use cell phone only for emergencies and that teens limit calls to under 10 minutes. If your kids have cell phones, encourage them to use the same smart tips you do.

Smart Use of Technology
The good news is most of us don’t have to give up our smartphones if we use them wisely. Here are some of the many tips Gittleman highlights in Zapped:

Don’t rely on the many stick-on devices available for your cell phone or computer that claim to protect you. Most are sold via network marketing, and I have yet to see the level of scientific proof that could convince me. You’ll likely see comments to this blog, advertising them. Caveat emptor!

Even if you go back to wired technologies at home, Wi-Fi is expanding rapidly into schools and other public buildings. If the telecommunications industry has its way, we will all be bathed in a sea of artificial radiation from nonstop EMF exposure.

Due to their lobbying efforts, Section 704 of the Telecommunications Act of 1996 makes state and local governments powerless to prohibit cell towers and wireless antennas based on “environmental (i.e., human) health concerns.” Write your congressmen and senators to change this legislation and to require the FCC to reduce exposure guidelines for EMFs.

Don’t wait for the government to protect you, though. Get your copy of Zapped and take action!