Digital device use and screen time have long been on the rise, but now during the COVID-19 pandemic, the amount of time we spend in front of screens has skyrocketed.1 Whether we are teleconferencing for work, homeschooling, virtually connecting with family and friends, watching television, streaming, or gaming, increased or prolonged screen time at any age has become the new normal in our daily routines.

It is no surprise that increased exposure to digital screens and the blue light, which emits from them, has raised health concerns, especially for eye health.

Blue light is a component of the visible spectrum of light—think of the colors seen in a rainbow. Of the different colors that make up natural light, blue light contains high energy and it is everywhere because the sun emits it and so do artificial light sources such as the digital screens of smartphones, laptops, tablets, computer monitors and even televisions. Blue light also emits via energy-saving bulbs such as compact fluorescent lights (CFLs) and light-emitting diodes (LEDs).

It is important to distinguish between the health effects of natural and artificial sources of blue light.

Blue light exposure from the sun plays a role in regulating our sleep-wake cycle, or circadian rhythm. In the morning, blue light from the sun suppresses a hormone called melatonin, which regulates sleep and signals it is time to wake up. In the evening, less blue light signals an increase in melatonin production, which helps us sleep. However, blue light from digital devices may interrupt this cycle.

This natural blue light cycle is interrupted by artificial sources of blue light from digital screens, compact fluorescent (CFL) bulbs, and light emitting diodes (LEDs) to which we are exposed during all hours of the day and night. Studies have shown that increased exposure to blue light during the evening hours, particularly two hours before bedtime, interrupts our circadian patterns, making it more difficult to fall asleep and stay asleep.2

More importantly, excessive blue light exposure from digital devices may impact eye health, the most common being digital eyestrain with symptoms that include difficulty focusing, blurred vision, dry eye and light sensitivity to name a few. While there is no evidence linking blue light to permanent vision loss, we should be concerned about protecting our eyes from too much exposure for better health and performance. Additionally, the impact of blue light on children may have a similar or greater effect on vision because their eyes are still developing and may be more sensitive to exposure. There is preliminary research indicating that screen time may contribute to hyperactivity and decreased attention spans.3

How can we protect against blue light exposure given our unavoidable need for digital devices and often-required high levels of screen time? Though many people may think that blue blocking glasses or screen filters are enough, there are more powerful and natural ways to safeguard against the potential harmful effects of blue light. The most effective way to protect against blue light exposure is by optimizing our intake of three key nutrients.

Because our bodies cannot make these protective pigments, which our eyes need, we must get them as nutrients, either from our diet or from supplementation.

Obtaining enough of the macular carotenoids from diet alone can be challenging. According to The Centers for Disease Control and Prevention,6 only 10 percent of American adults eat the recommended amounts of fruits and vegetables, while only nine percent of America's youth eats the recommended amount of fruits, and two percent eat the recommended amounts of vegetables each day. The lack of adequate dietary intake in children may be even more concerning because, as evidence suggests, their eyes are still developing and, therefore, may be more susceptible to the effects of blue light than an adult's eyes.

Recommended intake and clinical research indicate the optimum levels of lutein are at least 6-20 mg/day and of zeaxanthin are 1-4 mg/day. However, most people on a western diet usually get only 1-2 mg of lutein daily and less than 1 mg of zeaxanthin. Meso-zeaxanthin, because it is found in only trace quantities in food, may be missing altogether. Thus, many people are deficient in these important eye health nutrients. To make up for the gap, supplementation provides an easy way to protect the eyes against blue light exposure.

There are a wide variety of eye health supplements available on the market and each has a different formulation, making it difficult to choose. Many only contain two out of the three pigments—often lacking meso-zeaxanthin. In doing research for my book on prevention of macular degeneration through proper nutrition and healthy lifestyle choices, I've reviewed more than 40 of the top eye health supplements. I carefully looked at ingredients, dosing, formulation and bioavailability. In my research, I identified an ingredient called Lutemax 2020, which provides all three of these macular carotenoids: lutein, zeaxanthin and meso-zeaxanthin. The ingredient is a natural extract of marigold flowers and provides all three nutrients in the same 5:1 ratio as is found naturally in the diet.

In addition, Lutemax 2020 has strong science to back its benefits for vision and sleep. Multiple clinical studies support the role of Lutemax 2020 in increasing the macular carotenoid pigments in the retina,7 protecting our eyes during prolonged digital device use, improving visual performance and improving sleep quality.8 A double-blind, placebo controlled trial found that supplementing with Lutemax 2020 reduced eye fatigue and eyestrain resulting from prolonged digital device use.8 Also noted in this study were improvements in measures of vision including the ability to recover from bright lights (photo-stress recovery); the ability to judge distance and distinguish different objects from each other (contrast sensitivity); and improve the ability of the eyes to tolerate glare and bright light conditions (glare performance). Lutemax 2020 can be found in a variety of blue light and vision supplements including gummy supplements, which are great for children and adults (just look for Lutemax 2020 on the ingredient label).

Our society's dependence on digital technology has accelerated significantly during the current pandemic and extended screen time is now becoming the "new normal" not only for adults, but also for children. This trend is expected to continue even when the pandemic is a distant memory. Because of this new reality, it is important to be proactive when safeguarding our eyes from blue light, as well as ensuring optimal visual performance despite the demands of increased screen time. 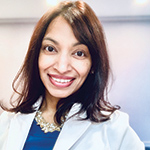 Dr. Rudrani Banik, is a board-certified ophthalmologist specializing in an integrative approach to vision health and author of, “The Macular Degeneration Prevention Protocol.” She is also a fellowship-trained neuro-ophthalmologist. Banik is the founder of Envision Health NYC, a concierge practice specializing in eye health, neurological conditions, and migraine headaches. She is Associate Professor of Ophthalmology at Mount Sinai Icahn School of Medicine. Banik is a member of the American Board of Ophthalmology’s Exam Development Committee and contributes to setting the standards for board certification. She has committed herself to 13 years of training at some of the finest medical institutions as Brown University and John Hopkins, allowing her to author numerous articles and present at national and international meetings.