Outside of those of Indian heritage and athletes, most Americans have never heard of shilajit, which is unfortunate in that it is quite useful as a dietary supplement. Reasonable claims are that it improves the uptake of other nutrients, supports energy production without being a stimulant, enhances mitochondrial function, exerts anti-inflammatory properties, and supports the actions of coenzyme Q-10 (CoQ10). It is generally classified as an adaptogen. At one time, there were serious pharmaceutical efforts to harness shilajit to produce an orally-available insulin for diabetics.

Shilajit typically is a blackish brown rock exudate that contains fulvic and humic acids (up to 85 percent of the total weight) along with a number of non-humic components, including local plant metabolites. Other names include "mineral pitch" and "moomio." Revered in the Indian Ayurvedic tradition, it is a complex organo-mineral substance that can be found exuding from rock fissures in the mountains of Asia.1 Most often found in the Himalayan foothills at altitudes between 1000–5000 meters, it is a substance revered in for its wealth of health-promoting properties. Consider the word "shilajit" itself—a Sanskrit term that has been variously translated as "rock-invincible," "winner of rock," or "conqueror of mountains and destroyer of weakness." Many sources claim to offer shilajit, but there are huge differences in quality. Raw shilajit must be carefully selected and properly processed before it is suitable for human consumption by modern standards. To start, the source material should be analyzed to ensure low levels of heavy metals (such as mercury, lead, and cadmium). Then the raw material must be treated to neutralize naturally present reactive oxygen species and fungal contaminants.2,3 Most research has focused on two sets of molecules found in shilajit: fulvic acids and dibenzo-á-pyrones (DBPs).

THE COMPONENTS OF SHILAJIT

Shilajit consists of a humus "core" that is in common with soil-sediment humus. Humic acids can be further broken down into fulvic acids and dibenzo-α-pyrones (DBPs), with a partial structure of the shilajit humus core involving oxygenated dibenzo-α-pyrones.4,5 Different sources of humic acids and different sources/forms of shilajit overlap to a large degree in components but can differ markedly in actual ratios of components. Shilajit humus consists of organic matter (60–80 percent), mineral matter (20–40 percent) and ~5 percent trace elements. 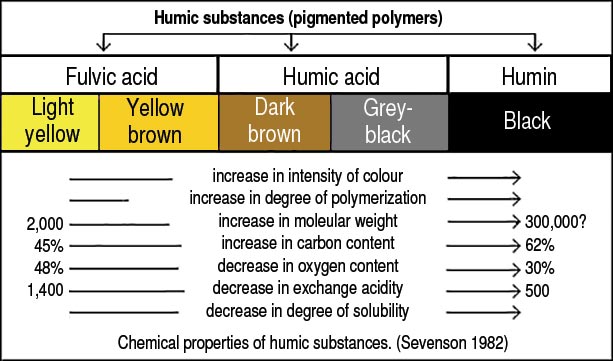 ANTI-INFLAMMATORY AND GROWTH BENEFITS OF HUMIC SUBSTANCES
A recent review of humic substances notes that these can be anti-inflammatory through a variety of mechanisms. Animal studies have demonstrated the suppression of delayed type hypersensitivity and contact hypersensitivity. Human studies have shown a reduction in C-reactive protein levels of patients suffering from osteoarthritis of the knee and the wheel and flare reaction of patients suffering from hay fever. The anti-inflammatory action of one of the humates tested involves the inhibition of the release of inflammatory-related cytokines, adhesion molecule, oxidants and components of the complement system. This same review provides safety data on properly manufactured humic and fulvic acids. Potassium humate according to this source is safe in humans at up to a daily dosage of 1 gram/kilogram bodyweight, whereas fulvic acid is safe in humans up to a much lower daily dosage of 1.8 grams total per adult.6 It is not advisable to test these dose limits with commercial products—follow the manufacturer's directions and start conservatively.

Large animal studies have been carried out using humic sources such as leonardite and lignite in weaned piglets and a complex of humic and fulvic acids in cattle.7,8 These studies were positive in terms of better weaning and improved rates of growth. The latter finding is in line with the commonly proposed benefits of humic acids for digestion and nutrient utilization.

IMMUNOMODULATORY SUPPORT
Animal studies into the effects of shilajit, humic and fulvic acids support benefits to immune function. One rat study showed that humic acid and fulvic acid supplementation resulted in strong humoral immune stimulation. The impact on thyroid activity needs to be further studied.9 Shilajit has been shown to activate phagocytosis and cytokine release, to stimulate osteoblastic differentiation of mesenchymal stem cells to induce the proliferation of lymphocytes in the thymus.10

ADAPTOGENIC BENEFITS AND DIBENZO-α-PYRONES (DBPS)
A 2014 review of shilajit's safety and efficacy notes that "animal and human data support its use as a 'revitalizer', enhancing physical performance and relieving fatigue with enhanced production of ATP. Key constituents in shilajit responsible for these effects appear to be dibenzo-α-pyrones and fulvic acid and their derivatives."11 At least some of these benefits are linked to improvements in mitochondrial function.12

The effects of shilajit are often described as "boosting energy levels and supporting endurance." Shilajit seems to do just that by increasing tissue concentrations of CoQ10 (and protecting ubiquinol levels) in the body and supporting efficiency in the mitochondrial electron-transport chain. CoQ10 has two primary roles in the body: 1) as a critical mitochondrial electron shuttle in the production of the body's energy currency, ATP and 2) as a lipid-soluble antioxidant that protects the body from reactive oxygen species (ROS) and helps regenerate other antioxidants like vitamin C, vitamin E, and lipoic acid. When our mitochondria begin to deteriorate and lose efficiency, a process that is often in lock-step with aging, less energy, and more ROS are generated. This leads to mitochondrial damage and decreased levels of total CoQ10, but especially the active-antioxidant form ubiquinol. That's where shilajit comes in.

Dibenzo-α-pyrones found in shilajit seem to be at least partly responsible for augmenting and protecting total CoQ10 levels and facilitating mitochondrial efficiency and durability.13 For instance, when one shilajit DBP (3,8- dihydroxydibenzo-α-pyrone [3,8-(OH)2-DBP]) was co-administered with CoQ10 in rats, CoQ10 levels in the heart and liver were elevated to a greater extent than when CoQ10 was given alone. In the lab dish, shilajit DBPs also protect ubiquinol from degradation in various conditions.14 Processed shilajit was also found to attenuate decreases in CoQ10 and ATP levels when given before exercise in mice.15 It seems that the "destroyer of weakness" appellation may not be mere hyperbole.

FULVIC ACID FUNCTIONS
The fulvic acid constituents of shilajit also appear to play a critical role.16 Evidence suggests that fulvic acids can both increase the GI absorption of a wide-range of constituents and support their transport into deep tissues.17,18 And fulvic acids might be said to "lubricate" electron transfer during energy production.19,20,21 These characteristics likely undergird the adaptogenic effects ascribed to shilajit and make it useful in the face of both physical and mental stress.22*

As an example, consider the range of stress endured when traveling to high-altitudes: extremely low humidity, decreased atmospheric pressure, severe cold, high wind velocity, and intense solar radiation exposure. Shilajit assists the body in coping with such conditions and supports physical and mental fitness by supporting energy reserves. In fact, a pilot human study using 200 mg/day in non-athletes for 15 days found improvements in various energy markers: total ATP, ATP/ADP ratio and total adenine nucleotides (TAN).23 Whether one is faced with a literal or figurative mountain, shilajit seems to be helpful in surmounting it.

SAFETY
Shilajit, humic and fulvic acids always must be carefully screened and prepared so as to avoid contamination with lead and other heavy metals or organic contaminants. This is a serious enough issue that the Canadian health authorities have raised it directly with regard to imported shilajit. Similarly, there are differing degrees of maximum tolerable and safe dosages among these three items. Distributors of dietary supplements must be aware of these differences and maximal tolerate intakes.

Shilajit has tested as quite safe at an intake of 100 mg/kilogram body weight daily for six weeks.24 A clinical trial in men 200 mg daily for 90 days (dose determined from Ayurvedic recommendations) failed to note any clinically significant toxicological symptoms.25 A larger dose of 2 grams shilajit (6.61 percent fulvic acid) daily for 45 days in humans aged 16–30 years likewise did not note any significant toxicological signs in serum.26