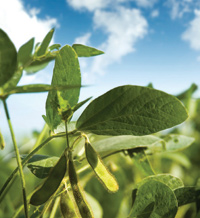 Among the most common herbicides used worldwide is one named Roundup. The authors of a study on the subject of cell damage and death reported their research “…points to detrimental health effects from Roundup®, which are currently masked or hidden from scientific scrutiny.”

GM crops are engineered to be Roundup resistant—their residues rank among the major pollutants and are authorized residues contaminating GM foods and feed at the tested levels. The researchers studied toxicity mechanisms of four different Roundup formulations in human cells. The formulations were diluted at minimal doses (up to 100,000 times or more), but they still caused cell death within just a few hours. The researchers also noted damages to membranes and DNA, and found the formulations inhibit cell respiration (oxygen levels needed within the cell like our lungs require oxygen).

Soybeans, cotton and corn are the world’s largest group of genetically modified crops. In fact, according to reports by Dr. J. Mercola, the GM Roundup-Ready® gene is part of more than 75 percent of soybeans, 65 percent of cotton and 10 percent of corn grown in the U.S.

These varieties of GM crops have become popular because farmers can spray Monsanto’s Roundup herbicide directly onto their fields without harming the crops. In other varieties of crops, Roundup, or any other glyphosate-based herbicide, sprayed onto a plant would kill it. Roundup works by inhibiting an enzyme called EPSP synthase, which is necessary for plants to grow. Without it, plants can’t produce essential proteins so they slowly yellow and die. GM Roundup-Ready crops produce an enzyme that has the same function as EPSP synthase, but is not affected by the Roundup.

The latest study, for the first time, showed just how toxic these residues are to your health. Even highly diluted formulations tested on human cells caused cell death within 24 hours! According to researchers, “This work clearly confirms that the adjuvants in Roundup formulations are not inert. Moreover, the proprietary mixtures available on the market could cause cell damage and even death around residual levels to be expected, especially in food and feed derived from Roundup formulation-treated crops.”

Monsanto long used the slogans, “It’s Safer than Mowing,” “Biodegradable,” and “Environmentally Friendly” to describe Roundup — until the REAL effects of this toxic herbicide were revealed and they were forced to discontinue their deceptive advertising.

Health Risks of GM Foods
To simplify the complexity of risks for you and your family, allow me to elaborate. If you eat GM foods, there is a very good chance those foods contain Roundup residues— and possibly hefty amounts! According to a leading spokesperson on the health dangers of GM foods, Jeffrey Smith, the study identified the following disorders all related to GM soy consumption; irritable bowel syndrome, digestive disorders, chronic fatigue, headaches, lethargy, skin disorders (acne, eczema, etc.), nausea, burning or itchy skin, severe multiple food and environmental allergies from newfound proteins never before existing in food which our bodies are not equipped to break down.

Food for Thought
About 70 percent of foods in your grocery store contain GM foods. In the U.S., GMO giants have been very effective in eliminating legislation to require them to clearly label GM products. Most U.S. stores do not post signs next to product to identify GM foods. The following label reading and shopping information will help you become an informed shopper:

Farmers who buy Monsanto’s Roundup-Ready seeds are required to sign an agreement promising not to save or sell the seeds. This insane practice means farmers now must buy new seeds annually and purchase them from Monsanto— there’s definitely something wrong with that picture.

Yes, it does take conscious effort to live healthy in a toxic world; however, you do have choices. I don’t know about you, but I’m not satisfied to simply live longer, I make informed choices to live healthier and maintain quality of life, naturally.