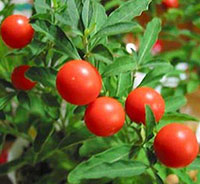 Ashwagandha (Withania somnifera) is an herb that grows in India, Pakistan, Afghanistan, Spain, parts of the Middle East, Africa, and the Canary Islands. It is sometimes called "Indian ginseng," probably because it is employed as an adaptogen or tonic in Ayurvedic traditional medicine.1 It is not, however, related to "true" ginseng (P. ginseng, P. quinquifolium). The root is used medicinally, although the seeds, shoots, juice and leaves have all been used traditionally as well.2

Phytochemical contents
Ashwagandha has been found to contain steroidal lactones called withanolides. Much of the pharmacological activities Ashwagandha are attributed to the presence of these steroidal lactones.3,4 In addition, the roots provide alkaloids, 18 fatty acids, beta sitesterol, polyphenols and phytosterols.5

Common uses
Traditional use of Ashwagandha includes its use as an aphrodisiac. As a folk remedy, it has a long list of uses. It is listed in the Indian Materia Medica, and is part of Ayurvedic, Siddha, and Unani traditions. Published research on Ashwagandha reveals a variety of potentially valuable and diverse uses for improving and supporting health. Following is a discussion of each of these potential uses.

Immune function
Besides it potential for treating cancer, research has shown that Ashwagandha is capable of improving immune function. This was demonstrated in one study where mice experienced an increase phagocytosis and intracellular macrophage activity against a pathogen when given a daily dose of Ashwagandha.16 In another study on mice, Ashwagandha was shown to improve the tumor-fighting ability of macrophages in relation to a known carcinogen.17 Ashwagandha has also prevented myelosuppression in mice treated with immunosuppressive drugs, and led to a significant increase in hemoglobin concentration, red blood cell count, white blood cell count, platelet count, and body weight, in addition to providing immunostimulatory activity.18

Finally, in a series of experiments, various techniques were used to suppress the immune response of mice, then subjected them to infectious organisms. In each experiment, mice pretreated with one of six herbs, including Ashwagandha, fared significantly better than control mice. Mice receiving the herbs demonstrated faster recovery, less disease, and lower mortality. These herbs blunted artificially-induced neutropenia (a deficit of neutrophils, a type of white blood cell) and stimulated leucocytosis (an increase of white blood cells). In treatments that employed both antibiotics and these herbs the combination produced a significantly greater healing effect than either treatment used alone. The herbs also reduced stress-induced damage.19

Antioxidant activity
Apparently, one of Ashwagandha's mechanisms of action is that it has significant antioxidant activity. In one study, Ashwagandha significantly reduced free radical oxidation in the livers of mice, while concurrently increasing the activity of antioxidant enzymes such as superoxide dismutase (SOD) and catalase.20 Other research has shown that Ashwagandha reduced free radical activity in stress induced animals.21 In another study, Ashwagandha administered once daily for 21 days, induced a dose related increase in SOD, catalase, and glutathione peroxidase in rats.22 One interesting study showed that as part of an Ayurvedic herbal formulation, Ashwagandha increased SOD activity in the pancreas of diabetic rats.23

Brain chemistry
Ashwagandha has also been used in the treatment of mental and emotional well-being, since it can influence brain chemistry in positive ways. For example it has been shown to be capable of improving memory and enhancing cognitive function in animal research by improving acetylcholine activity in the brain and binding to acetylcholine receptor sites.24 This herb also has GABA mimetic activity-that is it can mimic some of the activity of the relaxing neurotransmitter GABA.25 Clinical trials have shown that Ashwagandha can alleviate a reactive type of depression without sedating. Instead, it "optimizes mental and psychomotor performance by easing the mental stress bundle."26

Aphrodisiac
In a clinical trial of ashwagandha on the aging process in over 100 men, 71.4 percent of the men reported improvement in their capacity of sexual performance. These responses seem to support the herb's traditional use as an aphrodisiac.27

Perhaps the anti-inflammatory activity of Ashwagandha explains its efficacy in arthritis. In a one-month study, a combination of Ashwagandha, Boswellia serrata, Tumeric, and zinc were given to 42 patients with osteoarthritis. At the end of the study, there was a significant drop in severity of pain and disability.30

Anti-stress & anabolic activity
Given their relative similarities in function, a comparative study was performed on Ginseng (Panax ginseng), and Ashwagandha (Withania somnifera). Using aqueous suspensions of the powdered root, each herb was tested in mice: (1) for anti-stress activity (by the swimming endurance test); and (2) anabolic activity (by the weight measurement of body weight and levator ani muscle). In the swimming endurance test, Ashwagandha and Ginseng each showed anti-stress activity as compared to the control group, although the activity was higher with Ginseng. In the anabolic study, the mice treated with Ashwagandha showed a greater gain in body weight than those treated with Ginseng, although significant anabolic activity was observed for both herbs.31

Glandular support
As if all of the aforementioned benefits weren't sufficient, Ashwagandha also supports the function of the thyroid, liver and pancreas. After being administered on a daily basis for 20 days, mice experienced an increase in both T3 and T4 thyroid hormones. In the same study, Ashwagandha also decreased free radical activity in the liver.33 In another study, a combination of Ashwagandha and other herbs (Tinospora cordifolia, Eclipta alba, Ocimum sanctum, Picrorrhiza kurroa and shilajit) administered once daily for 28 days decreased blood sugar levels in diabetic rats, and decreased free radical activity in their pancreas as well. This activity in the pancreas is important since the reduction in blood sugar may be due to pancreatic free radical scavenging activity, which protects the cells that produce insulin.34

Safety
To determine any potential toxicity of Ashwagandha (as well as Panax Ginseng), a study was conducted in rats with 90 days oral administration using three doses. Food consumption, body weight, haematological, biochemical and histopathological parameters were studied. The results were that brain, heart, lung, liver, spleen, kidneys, stomach, testis and ovaries were normal on gross examination and histopathologically. Sub-acute toxicity studies in rats did not reveal any toxicity.35 Apparently, Ashwagandha is a safe herb. Even so, one research has suggested that Ashwagandha is contraindicated during pregnancy.36