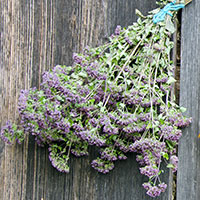 Culinary herbs seldom began their human histories as mere flavorings. Indeed, the kitchen herb and spice rack could reasonably be dubbed the kitchen medicine chest and several useful books have done just that. Oregano is a good example of a culinary herb that leads a double life. In much of the world, this plant continues to be used not just to flavor and preserve food, but also to disinfect surfaces and wounds, to calm the stomach, and much more. For some of these purposes, oregano extracts may still be as good or better than many of the modern alternatives. In other words, the health benefits of oregano are not only "traditional" or "folk remedies."

In recent years, oregano has been surprisingly well studied. Harry Preuss of Georgetown University Medical Center, for instance, over the last decade has published five studies on oregano and other essential oils with results that are impressive. For uses as diverse as from antibiotics to weight loss, oregano and its constituent compounds are attracting new interest in an old remedy.

Oregano (Origanum vulgare) is in the same family as rosemary, thyme and the mints. Also called "wild" or "winter" marjoram, it is not to be confused with the related "sweet" marjoram. A further distinction often is made in the health food industry between the oregano cultivated for culinary uses and the species that grow wild, particularly in the Eastern Mediterranean. The latter have a much stronger flavor and aroma reflecting their higher content of certain essential oils.

Constituents of oregano vary with the species, the growing area and the season. The chief active constituents of oregano are a volatile oil known as carvacrol along with the related compound thymol, which is more characteristic of the herb thyme. Also found are the precursor molecule p-cymene and smaller amounts of a variety of other phenolic compounds. Most of the volatile compounds found in oregano are terpenes. Although it might seem to be a foreign term from chemistry, almost everyone is familiar with one or more terpenes—probably the best known terpene is limonene, the highly aromatic compound found in the peel of oranges and the chief component of orange oil.

A number of the most ancient employments for oregano remain common. Uses attributed to Hippocrates and the Greek medical tradition include as an antiseptic, a cure for stomach complaints and as a solution to respiratory ailments. Other uses sometimes suggested include rheumatoid arthritis, urinary tract infections, headaches, convulsions and fatigue (the last being common in 19th Century materia medica manuals). A favored use both in the past and today is for parasites.1 The essential oil exhibits diuretic, expectorant and antispasmodic properties as well as a stimulant effect on bile production.2

Much of the focus of contemporary oregano research has been on its benefits against fungal and bacterial infections. Some eighty percent of all antibiotics produced in the US are fed to animals, a seriously bad practice that creates reservoirs of resistant bacteria that then are transmitted to humans via food and other vectors.

In the first of several studies, researchers at Georgetown University Medical Center examined a number of volatile aromatic oils for their benefits.3 Oregano oil, which today primarily is used as a food flavoring agent, was hypothesized to possess a broad spectrum of in vitro antimicrobial activities attributable to the high content of phenolic derivatives such as carvacrol and thymol. In a study published in 2001, the antifungal properties of oregano oil were examined both in vitro and in vivo using the yeast Candida albicans as the exemplar fungal model. In an animal model of systemic candidiasis using mice, consumption of oregano oil supplied in olive oil led to 80% survival at 30 days versus none in the animals fed only olive oil. Carvacrol, the major constituent of the oil, was similarly effective, yet visual observation found that the mice consuming the oregano oil presented a cosmetically superior clinical appearance. This trial showed that oregano oil warrants further examination for possible benefits in pathogenic fungal infections.

A second trial explored the benefits of oregano oil and the coconut oil fraction monolaurin against one of the more common bacterial infective agents, Staphylococcus aureus.4 As before, both in vitro and in vivo tests were carried out. In vitro, oregano oil was the most successful of the essential oils tested. In mice, systemic infection with S. aureus is routinely and rapidly fatal. This particular trial found that all 14 mice in the untreated arm of the study died within a one week period. Of the oregano oil treated mice, six of fourteen were still alive at 30 days. This compared favorably with the survival rates of those receiving daily vancomycin (7/14) and monolaurin (4/8). Over 60% of mice survived when receiving a daily combination of oregano oil and monolaurin (5/8). This trial therefore demonstrated that oregano oil, either alone or in combination with monolaurin, warrants further examination for possible use for prevention and therapy of Staphylococcus aureus infections. Numerous studies, in fact, have been undertaken since this one and have demonstrated, for instance, activity against methicillin-resistant staphylococci.5 In a world of increasing resistance to antibiotics, this is significant.

Needless to say, staphylococci are not the only bacterial pathogens against which new active agents are required. A third test conducted at Dr. Preuss' laboratory examined the efficacy in vitro of oregano and several other essential oils as well as monolaurin against a variety of gram-positive and gram-negative bacteria. Oregano oil proved active against all the tested pathogens except B. anthracis Sterne.6

The successful use of oregano oil against parasitic infections has been mentioned already.

Two interesting developments in modern research may break new ground for uses of oregano oil. The first involves insulin metabolism. Researchers in 2005 examined the ability of various combinations of essential oils such as fenugreek, cinnamon, cumin, oregano, etc. to enhance insulin sensitivity. As a first approximation, they examined the effects of these natural products on Zucker fatty rats, a model of obesity and insulin resistance, and spontaneously hypertensive rats, a model of genetic hypertension. The ability to alter systolic blood pressure (the upper figure) in rat models is the most sensitive early index of insulin sensitivity. In this particular trial, various combinations of essential oils lowered blood pressure in both rat species, suggesting improved insulin sensitivity.7

The story does not end with blood pressure data. Relatedly, a mouse study found that carvacrol appears to inhibit visceral adipogenesis (the creation of new fat cells in belly fat tissue) and it also attenuates the production of pro-inflammatory cytokines in these tissues.8 Work in another model, this one with induced edema in the paws, demonstrated anti-inflammatory and anti-ulcer protections, as well.9

Finally, there is information emerging regarding oregano's protection against prostate cancer. According to Dr. Supriya Bavadekar, PhD, RPh, Assistant Professor of Pharmacology at Long Island University's Arnold & Marie Schwartz College of Pharmacy and Health Sciences, the lead scientist for work presented at a conference in 2012, "Some researchers have previously shown that eating pizza may cut down cancer risk. This effect has been mostly attributed to lycopene, a substance found in tomato sauce, but we now feel that even the oregano seasoning may play a role."10

Safety and Usage of Oregano

Oregano and oregano oil are generally considered as safe (GRAS). However, caveats do apply. Large amounts of either may irritate the gastrointestinal tract. Concentrated amounts taken internally especially should be avoided in pregnancy and lactation. Also, the essential oil can be an irritant not just to the gastrointestinal tract, but to the skin, hence topically the essential oil usually is applied only as part of a prepared ointment.

For intestinal parasitic infection, an emulsified oil of oregano has been used in a dose of 200 mg three times daily for 6 weeks, but such treatments need to be overseen by an experienced physician. Traditionally for other purposes, a typical dose is one cup of tea made by steeping one heaping teaspoon of the dried leaf in 250 mL boiling water 10 minutes. Alternatively, 19th Century herbals and medical manuals suggested 2 - 5 drops / day of the essential oil taken on a sugar cube for gastrointestinal issues and as an aromatic stimulant.