The American College of Rheumatology reports that rheumatoid arthritis (RA) is a chronic disease that causes pain, stiffness, swelling, and loss of function in the joints and inflammation in other body organs. Unlike OA, RA is an autoimmune disease where the body’s immune system attacks its own joint tissue. While the cause of RA remains unknown, recent studies show that certain people inherit a tendency to develop RA. RA affects about two million Americans. 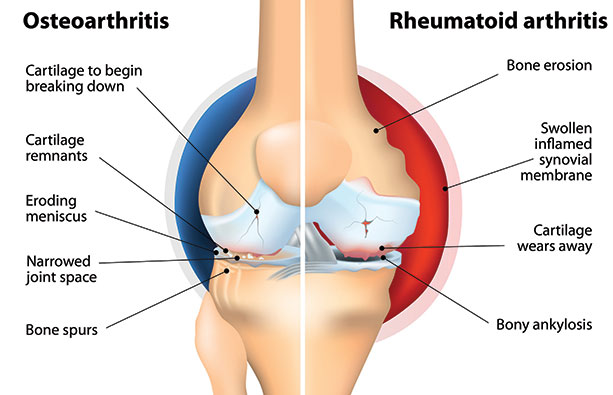 Undenatured Collagen Type II
UC-II™ is a proprietary brand of undenatured type II collagen derived from chicken sternum cartilage and is particularly valuable for RA sufferers. Here’s why: Type II collagen administered orally works with the immune system to promote healthy joints by a process called oral tolerization. This process helps the body to differentiate between foreign invaders, such as bacteria, and elements that are good for the body, such as nutrients. The process of oral tolerization takes place in the small intestine where food is absorbed. Through a complex series of immunological events, patches of lymphoid tissue surrounding the small intestine screen incoming compounds and serve as a “switch” to turn the body’s immune response to foreign substances on or off, depending upon what that substance is. In the case of UCII, small amounts (typically 10 milligrams or less1 ) taken orally at bedtime have been shown to turn off the immune response targeted at the type II collagen present in bone joint cartilage.2,3

UC-II is supported by six human clinical studies, including research at Harvard University Medical School. Here is a review of three of those studies.

Since UC-II is taken at bedtime, we also recommend the use of two herbs to be taken concurrently. These herbs not only help promote healthy sleep, but may also help reduce RA-associated pain.

California poppy (Eschscholtzia californica)
California poppy has been used historically to treat insomnia, the need for sedation, aches and pains, nervous conditions, childhood enuresis, and bladder disorders.10 Its sedating effects are in themselves potentially valuable for pain relief, since tension can exacerbate pain. This sedating effect was demonstrated in a double-blind, placebo-controlled study where a preparation containing fixed quantities of Hawthorn, California Poppy and magnesium proved safe and more effective than placebo in treating mild-to-moderate anxiety disorders.11 In one study, extracts of corydalis and California poppy inhibited a particular degradation process (dimerization) of certain pain-modulating peptides in the brain. This effect is thought to prolong the activity of these pain-relieving molecules.12

Omega 3 Fatty Acids
In a previous issue of HSR, we wrote an article about omega 3 fatty acids (O3FA). In that article we included a discussion of O3FA's value in the treatment of RA. Here is a brief review of that information.

Conclusion
UC-II. may help reduce pain and promote healthy joints in those suffering from RA. Likewise, O3FA may help lessen RA symptoms. Finally, Valerian and California poppy may help promote sleep and pain relief for arthritis sufferers. The concurrent use of all of these natural substances may yield a better result than any one individually.