A Frank Comparison of Ubiquinol to a New, High-Bioavailability Form of Ubiquinone

Coenzyme Q10 is a vitamin-like substance that has two main physiological roles: energy production and antioxidant protection. As part of the electron transport chain, it participates in aerobic cellular respiration and generates 90-95 percent of the energy in the body. As an antioxidant, it scavenges free radicals, thus protecting proteins, LDL (“bad”) cholesterol, and mitochondrial DNA from oxidative damage. It is particularly active in the membranes of the cells and cell organelles.

Over the last decade, CoQ10 has become one of the top-selling nutritional supplements in the United States, Japan, and Europe. In fact, worldwide CoQ10 sales reached $835 million in 2008 — more than double 2003 sales of $380 million.

However, as anyone with even a passing familiarity of CoQ10 knows, the compound is notoriously difficult to absorb for several reasons. First, CoQ10 is lipid-soluble, so it doesn’t dissolve well in aqueous environments. And second, CoQ10 is commonly available in a powdered crystalline form that must be dissolved before it can be absorbed. Yet the melting point of the crystals is 118 degrees F° — quite a bit higher than the normal body temperature of 98.6 F°.

In 2006, a different kind of CoQ10 was unveiled with much fanfare. Ubiquinol, the new form, was said to be the most biologically active form of CoQ10, and claimed to have significantly increased bioavailability compared to ubiquinone, the standard form. On the surface, ubiquinol would appear to be superior. But is it all the marketers have cracked it up to be? And how does it compare to a new high-bioavailability form of ubiquinone?

Ubiquinone vs. Ubiquinol: What’s the Difference?

Both the names ubiquinone and ubiquinol come from the word “ubiquitous,” meaning “everywhere,” because CoQ10 is found so widely in the body. So what exactly is the difference between these two forms?

Think back to the two basic functions of CoQ10: energy production and antioxidant protection. Ubiquinone is the oxidized form of CoQ10 used to create energy. (We tend to think of “oxidized” as bad, but in this case it simply means that it is in the form needed to produce ATP.) Ubiquinol is the reduced form of CoQ10 used to provide antioxidant protection.

The simple truth is that both forms are needed by the body, and CoQ10’s location in the body determines the form it takes. Inside the cells, where energy is produced, ubiquinone is in great demand. However, outside the cells, in the blood and cell membranes, ubiquinol works as an antioxidant.

Importantly, ubiquinone and ubiquinol form a redox pair. This means each one can be easily converted to the other by the body.

Given the fact that the body can switch the two substances back and forth to meet its own requirements, the argument that ubiquinol is the “biologically active” form of CoQ10 is not valid. Additionally, while claims have been made that adults over 40 have difficulty reducing ubiquinone to ubiquinol, a recent human study indicates otherwise. 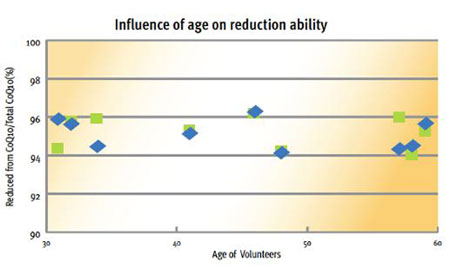 It’s ironic that ubiquinone is often viewed as inferior to ubiquinol, considering that the ubiquinol found in animal protein is converted to ubiquinone through the process of cooking before it is eaten.

Similarly, ubiquinol taken as a supplement is quite unstable in the stomach and is converted back to ubiquinone before absorption. This means that no matter which form of CoQ10 the consumer chooses to ingest, it’s ubiquinone that is absorbed into the body.

Perhaps more importantly, in the four years since ubiquinol was presented as an alternative to ubiquninone, only one human clinical trial on the substance has been published in the peer-reviewed scientific literature. In marked contrast, there have been hundreds of clinical studies showing ubiquinone is an effective supplement for a wide variety of illnesses and conditions.

The Truth About Ubiquinol

Ubiquinol does appear to have one advantage. It is more bioavailable than the dry powdered forms of ubiquinone that have been widely commercially available. In a head-to-head single-dose study, oil-based ubiquinol was found to be 60 percent better absorbed than powdered ubiquinone, and that percentage may increase with longer-term supplementation. However, ubiquinol’s increased absorption over ubiquinone powder is not entirely surprising, given the fact that CoQ10 is primarily lipid-soluble, so it needs to be in the presence of oil to be absorbed.

Despite its higher bioavailability than powdered ubiquinone, ubiquinol has several drawbacks. First, it’s significantly more expensive. Second, it’s hard to work with. Manufacturers must take great care to protect ubiquinol from exposure to air, which causes it to change back to ubiquinone — completely defeating the purpose of using it. And third, delivery options for ubiquinol are very limited; the only way to encapsulate it is to suspend it in oil in soft gel form.

Enter the latest competitor into the CoQ10 marketplace: BioQ10 SA, manufactured by Mitsubishi Gas Chemical Company Inc. (MGC). BioQ10 SA is an advanced version of ubiquinone that was developed for superior absorption through a proprietary emulsification process.

In order to be absorbed by the body, fat-soluble nutrients such as CoQ10 must first undergo emulsification in the digestive system. (Emulsification is the process whereby large fat droplets are broken down into smaller, uniformly distributed particles.) Next, the particles must be dispersible in water so they can be absorbed through the small intestine. Unfortunately, the body’s emulsification process is not perfect, which is why some manufacturers have developed pre-emulsified CoQ10 ingredients.

In the case of BioQ10 SA, the CoQ10 is blended with a unique emulsifier: a specific soy protein. The structure of the specific soy protein is ideal for blending with CoQ10 because it has both hydrophobic (water-fearing) and hydrophilic (water-loving) parts within each molecule. In the presence of the emulsifier, water-insoluble materials, like CoQ10, are surrounded by the hydrophobic part of the emulsifier and the hydrophilic part is located on the outside (the water side). As a result, water-insoluble materials are dispersed with the emulsifier in water and absorbed well in the small intestine.

Importantly, the degree of emulsification in a CoQ10 preparation differs depending on the kind of emulsifier used. Unlike many commercial chemical emulsifiers, the specific soy protein molecule has a complicated three-dimensional structure that matches the three-dimensional structure of the CoQ10 molecule. As a result, it has a good affinity for CoQ10 and yields improved absorption of the nutrient. 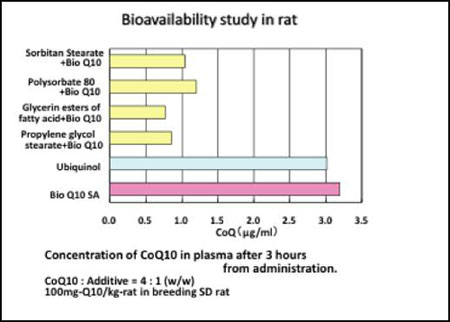 Fasting rats were divided into six groups and administered 100 mg/kg of regular ubiquinone with one of four different emulsifiers (sorbitan stearate, polysorbate 80, glycerin esters of fatty acid, or propylene glycol state), ubiquinol, or BioQ10 SA. Three hours later, the concentration of CoQ10 in the rats’ plasma was measured.

The four groups given regular ubiquinone mixed with a standard emulsifier had approximately .75 to 1.25 g/ml of CoQ10 in their blood. The ubiquinol group had 3 g/ml. And the BioQ10 SA group had close to 3.2 g/ml.

All of the food additives enhanced absorption of CoQ10, with soy milk powder causing the greatest increase. Likewise, all of the soy constituents boosted CoQ10 absorption. However, the biggest gains were evidenced in rats fed CoQ10 mixed with soy protein — in fact, the increase in absorption was nearly 300% compared to CoQ10 alone. 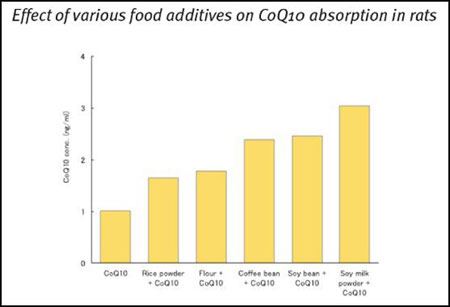 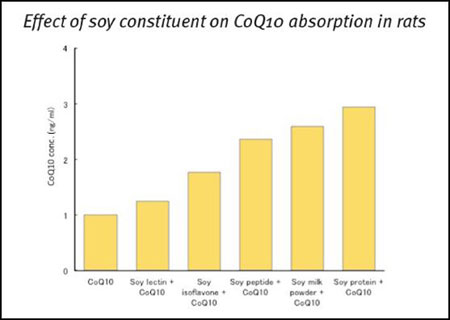 The results showed that CoQ10 in soft capsules was better absorbed than CoQ10 in hard capsules, and that BioQ10 SA was better absorbed than regular ubiquinone. The winning combination was BioQ10 SA in soft capsules. Subjects in Group 1 achieved by far the highest absorption rate of CoQ10, in both the short-term (24 hours) and the long-term (three weeks). 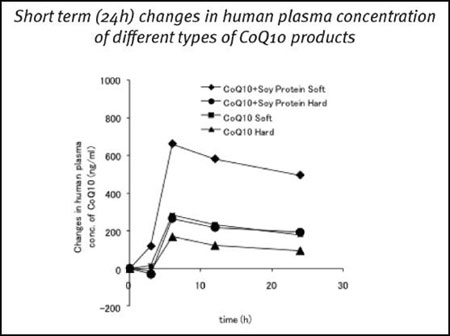 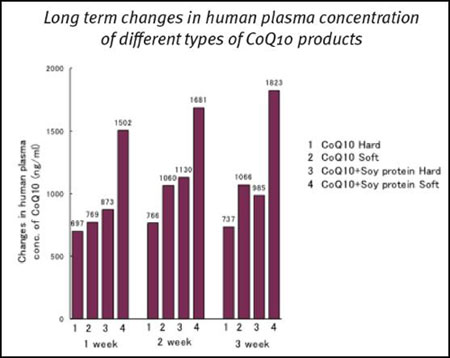 Available as a bulk powder from MGC, BioQ10 SA offers several advantages to manufacturers and consumers over ubiquinol.